Lion and Marta Feuchtwanger pose in front of a bookcase. 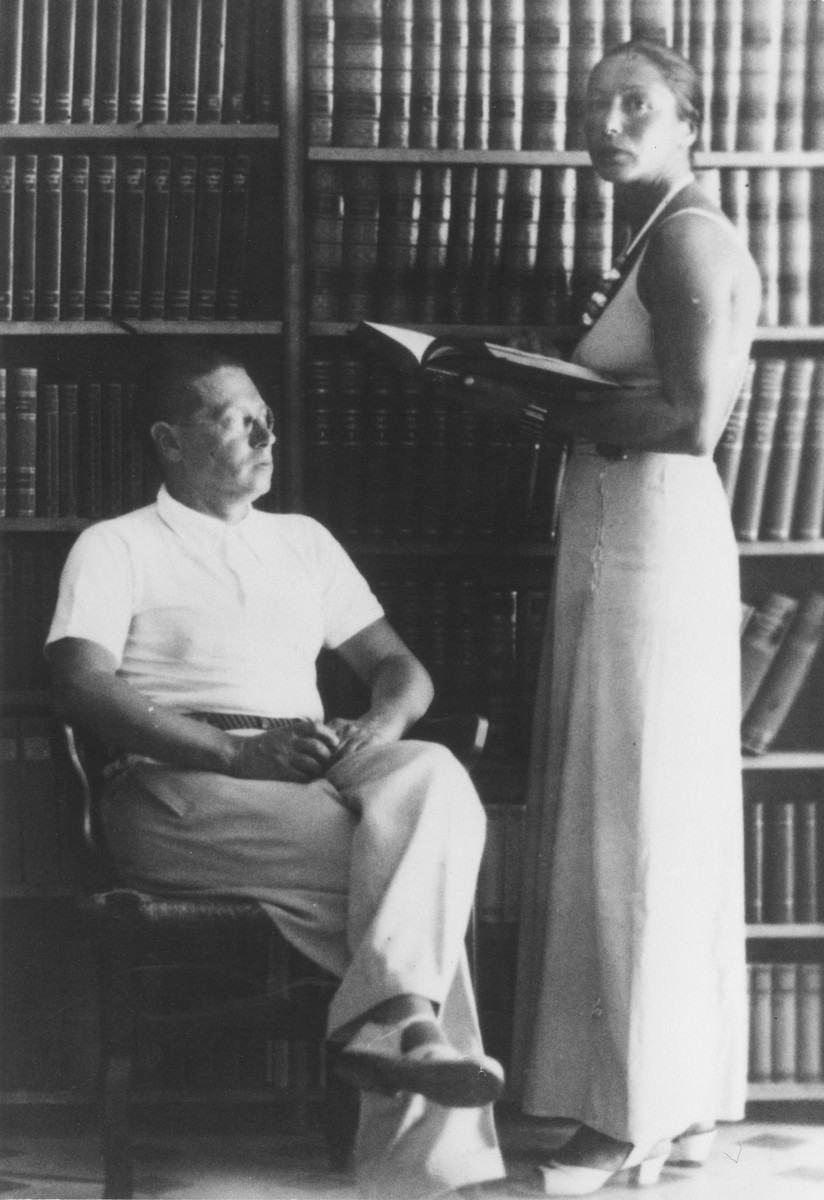 Lion and Marta Feuchtwanger pose in front of a bookcase.

[Greenberg, Karen J. Columbia University Library, New York: the Varian Fry papers: the Fort Ontario Emergency Refugee Shelter papers. New York: Garland, 1990; Gold, Mary Jayne. Crossroads Marseilles 1940. Garden City, N.Y.: Doubleday, 1980.]
Biography
Lion Feuchtwanger (1884-1958), German novelist and dramatist of Jewish origin. Raised in an Orthodox family in Munich that also maintained ties to German secular culture, Feuchtwanger was exposed both to traditional Jewish learning and modern secular thought from an early age. At the University of Munich (1903-7), where he studied philology, history and anthropology, he wrote his dissertation on the origins of Heinrich Heine's "The Rabbi of Bacherach." Unable to pursue an academic career without converting to Christianity, Feuchtwanger turned to writing. In 1912 he married author Marta Loeffler. After serving in the German army during World War I, Feuchtwanger returned to writing and collaborated on several plays with Bertolt Brecht. In 1926 he moved to Berlin, where he published his first historical novel, Jud Suess (1926). The novel, which dealt with the issues of conversion and anti-Semitism in the life of an 18th century Jewish court financier, was an international bestseller that brought him worldwide acclaim. (It was later made into a film in Great Britain and used as the basis for the Nazi anti-Semitic film by the same name released in 1940.) Feuchtwanger was being feted in Washington, D.C during a lecture tour of the U.S. when Hitler came to power on January 30, 1933. Soon after, Feuchtwanger's home and library in Berlin were ransacked and his citizenship was revoked. He followed the German ambassador's advice not to return to Germany and instead met his wife elsewhere in Europe. They eventually found asylum in Sanary, France. During his first year in exile Feuchtwanger completed "The Oppermanns," the first explicitly anti-Nazi novel written by a German exile. With its publication and rapid translation into ten languages, Feuchtwanger became a leading spokesman for the German opposition to the Third Reich. In 1937 he traveled to Moscow to meet with Stalin and later that year published "Moscow, 1937" about this venture. When World War II broke out in 1939, Feuchtwanger was completing his historical trilogy, "Josephus" about the first century CE Jewish historian who was torn between his attachment to Rome and his Jewish nationalism (written between 1931 and 1941). Along with thousands of other German exiles, Feuchtwanger was interned by the French government. He was sent to the Les Milles camp. He was soon released, only to be re-interned on May 21, 1940 after the Germans invaded France. When, after the signing of the armistice on June 22, it was rumored in Les Milles that German troops were moving in, a group of inmates were placed on a train that eventually discharged them at Camp St. Nicholas near Nimes. In nearby Marseilles, Feuchtwanger's wife, Marta, sought the assistance of American consuls Hiram Bingham and Miles Standish, who agreed to help her orchestrate Feuchtwanger's escape from St. Nicolas. Several days later, Miles Standish rode in a chauffeur driven car to a river near the camp where the inmates were allowed to bathe. He found Feuchtwanger by the river clad only in shorts and showed him a note from his wife: "Don't ask anything, don't say anything, go along." He got into the car. On the back seat Standish helped him into a woman's overcoat, put a shawl over his head and gave him dark glasses. When French police officers stopped the American car and asked Standish who the lady was, he replied that it was his mother-in-law. Feuchtwanger joined his wife at Bingham's villa on the outskirts of Marseilles. The consul had arranged to have a picture of Feuchtwanger standing behind a barbed wire fence at Les Milles sent to America. Feuchtwanger's American publisher, Ben Huebsch of the Viking Press, had friends show the photo to Eleanor Roosevelt. Shortly thereafter, the President sent an unofficial order to Bingham in Marseilles to issue emergency visas for the Feuchtwangers. Eleanor Roosevelt also sent Unitarian Minister Waitstill Sharp and his wife Martha to assist the refugee couple. With false identifications made out to Lion Wetcheek and Marta Leoffler, the Sharps accompanied them over the Pyrenees into Spain and then on to Portugal. Reports of Nazi plans to kidnap refugees led Feuchtwanger and Sharp to depart for the U.S. immediately, without their wives. They arrived in New York aboard the SS Excalibur on October 5, 1940. The women followed two weeks later. In New York Feuchtwanger wrote a book on his experience in Les Milles called "The Devil in France." In 1941 he and his wife moved to California, settling in Pacific Palisades. Feuchtwanger continued to write until his death in 1958.