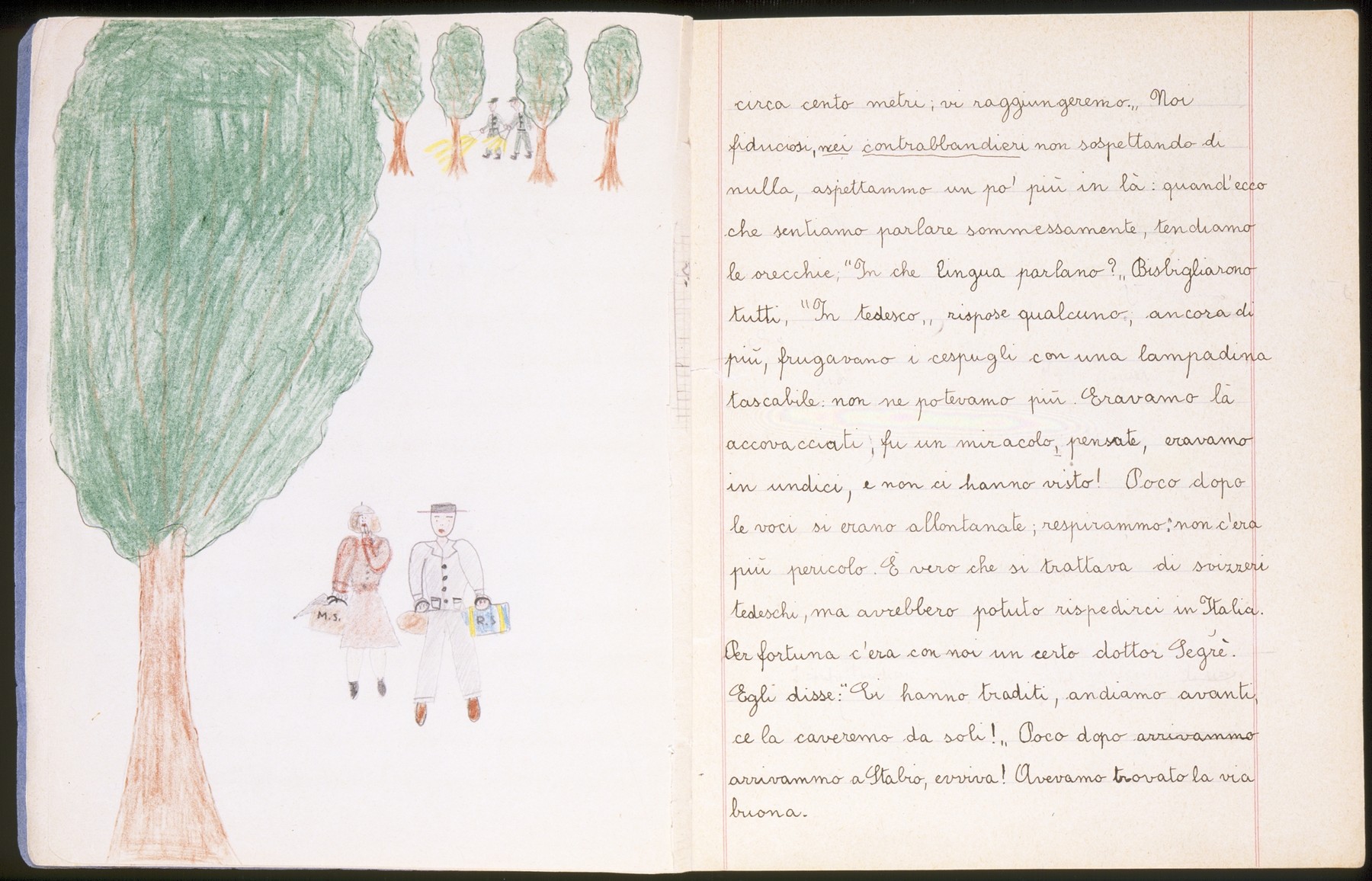 The diary entry describes how they crossed the border into Switzerland. The text reads, "We came out of the woods and into a clearing: we had to be as quiet as possible because we were so close to the border. Oh! I almost forgot! Before we came out of the woods, they made us stand still for a quarter of an hour while they went to explore the area and to cut through the fence. Fortunately, shortly thereafter, we began to walk again. We saw a small guard station that was literally in front of the hole in the fence, fortunately the guard was not there. One by one, silently, we went through the hole in the fence. What emotion! Finally, we were in free territory, in Switzerland."

Biography
Bruna D'Urbino (born Bruna Cases) is the daughter of Guido and Nelly (Raffael) Cases. She was born March 7, 1934 in Milan, where her father was an attorney for the Swiss transportation company Gondrand. Bruna was raised in an assimilated Jewish family. She had a stepsister Anna (b. 1916) and a stepbrother Cesare (b. 1920), as well as a sister, Emilia Rietti, (b. 1925). After the Italian racial laws were enacted in 1938, Cesare left Milan for Switzerland and enrolled at the University of Lausanne. In 1942, shortly after the start of Bruna's fourth grade school year, Milan came under bombardment, and she fled with her mother and Emilia to Parma. Her father continued to work in Milan, but was able to visit the family in Parma. Anna also remained in Milan, where she was compelled to work for the military as a seamstress. Following the September 8, 1943 armistice, the Germans entered Parma and began arresting Jews. Bruna then fled with her mother and sister to Milan. They did not return to their own apartment, since Guido was too well known. Instead they stayed at her grandfather's house for a few days. They ate only in restaurants, since the Germans were known to conduct raids during meal times, when people were most likely to be at home. Since Guido was working for a Swiss company, he decided to flee to Switzerland along with his mother. He assumed the company would help him once he arrived, and that the Swiss would allow an elderly woman to enter. However, when they crossed the border, Guido was put into a Swiss internment camp. For the next two months (November-December, 1943) he lived at the Goudo and San Bioggio camps. In San Biagio he was forced to take ice cold showers outside and as a result was hospitalized with pneumonia. His mother was sent to a hopice for the elderly in Roveredo. Bruna's mother also decided to try to escape to Switzerland in the fall of 1943. Through friends living in Varese, she made contact with a group of cigarette smugglers, who had begun smuggling people across the Swiss border as well. At the end of October, Bruna, her mother and sisters crossed into Switzerland. They were all interned at the Bellinzona (children's school) and Rovio camps from the end of October to December 1943. At the end of December, Bruna and her mother and sisters were sent to the Hotel Majestic in Lugano, which was being used as a refugee camp. They had no sheets or blankets and slept on straw. While living in this family camp they received word that Guido's Swiss company, Gondrand, had agreed to sponsor them. Bruna and her mother then left Lugano and went to visit Guido for the first time. Anna and Emilia were sent from Lugano to the camp of Brissago and afterwards to Neuchatel where they became laboratory workers. Bruna and her mother joined her grandmother in Roverdo. After the war the family returned to Italy, where Guido died of the tuberculosis he contracted in Switzerland, in 1949.