Jewish leaders attend a meeting of the World Jewish Congress in Montreux, Switzerland. 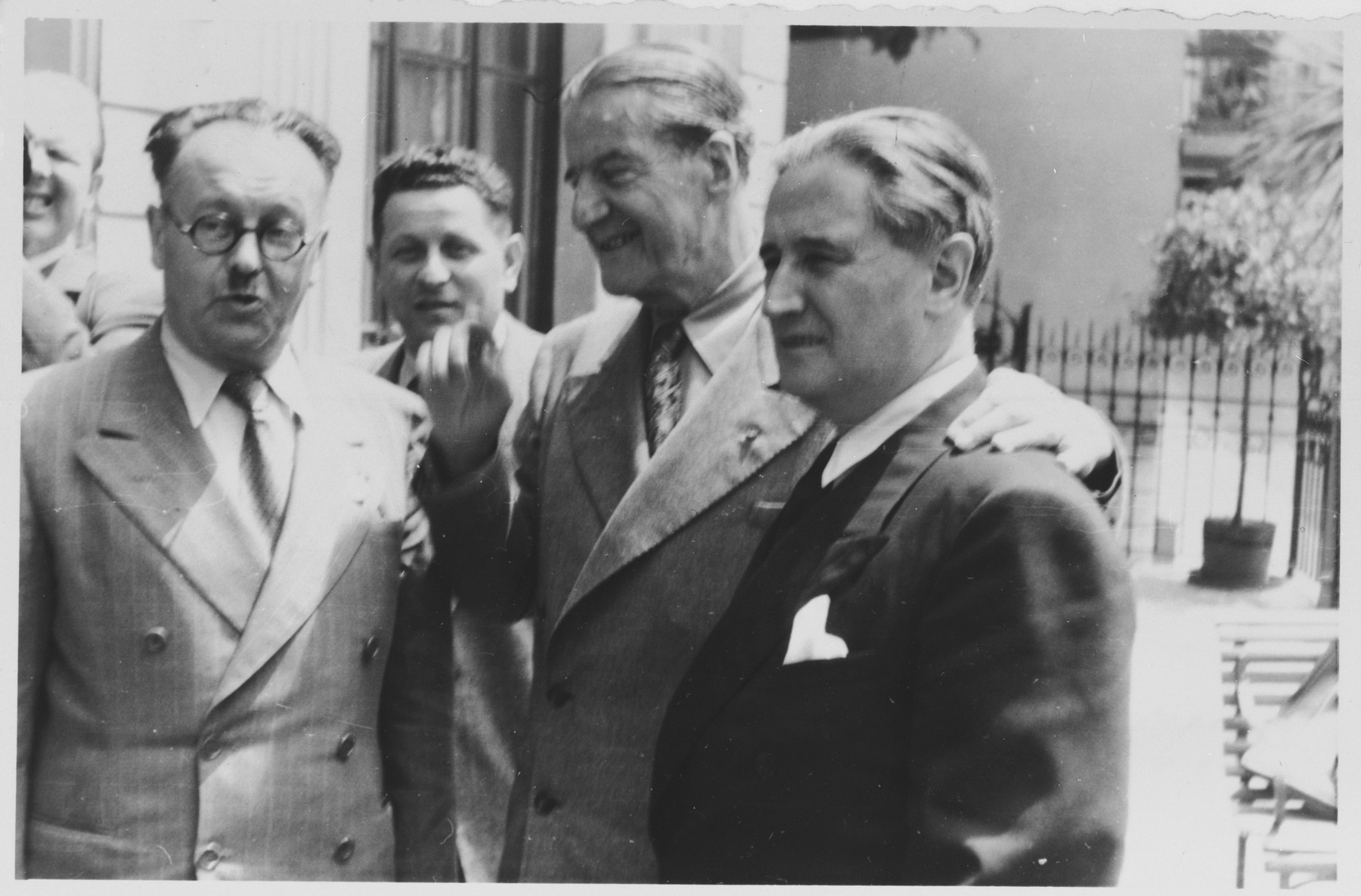 Jewish leaders attend a meeting of the World Jewish Congress in Montreux, Switzerland.

Among those pictured is Nahum Goldman (right) and Rabbi Stephen Wise (second from the right).

Nahum Goldmann (1895-1982), Jewish statesman and Zionist leader. Born in Visznevo, Lithuania, Goldmann moved to Germany at the age of five. He inherited his lifelong commitment to the Jewish people and Zionism from his father, who was a writer and teacher of Hebrew. In 1913 Goldmann visited Palestine for the first time, after which he published an account of his experiences. During WWI Goldmann worked in the Jewish section of the German Foreign Ministry. In the immediate postwar years he completed doctorates in law and the humanities at the university in Heidelberg. Goldmann went on to found the Eshkol Press with Jacob Klatzkin and together they published the Encyclopedia Judaica, twelve volumes of which appeared between 1928 and 1934. In the 1920s Goldmann was involved in the Committee of Jewish Delegations, an umbrella organization of Jewish groups seeking guarantees of minority rights for the Jews of central and eastern Europe. At the same time Goldmann was actively engaged in the Zionist movement and served on the political committee of the Zionist Congress. Forced to leave Germany in 1933, Goldmann settled in Switzerland, where he became chairman of the Committee of Jewish Delegations. In 1936 the committee was succeeded by the World Jewish Congress, which Goldmann co-founded with Stephen Wise. The new organization sought the mobilization of world Jewry and democratic forces to combat the Nazi menace, to defend the rights of Jewish minorities in Europe and to promote the establishment of a Jewish national home in Palestine. Until 1939 Goldmann represented both the WJC and the Jewish Agency for Palestine at the League of Nations. In this capacity he led efforts to prevent the application of Nazi discriminatory policies in Upper Silesia, fought the introduction of anti-Jewish legislation in Romania in 1937, appealed for the protection of Austrian Jews after the Anschluss and worked toward a solution of the refugee crisis at the Evian Conference. Goldman also played a key role in the Jewish anti-Nazi boycott movement and the negotiation of the Haavara [Transfer] Agreement between the Jewish Agency and Germany authorities. Throughout the war Goldmann continued to work for both organizations from his new home in the U.S., where he moved in June 1940. With Stephen Wise he worked to mobilize American public opinion to come to the aid of Jews in Nazi-occupied Europe. It was Goldman along with Wise who broke the silence about the Final Solution after their receipt of the Riegner cable in August 1942. Goldmann chaired the Advisory Council on European Jewish Affairs in New York, which was responsible for shipping parcels to Europe, developing rescue plans and drafting proposals for postwar rehabilitation. After the war Goldmann was a leader in the struggle for the admittance of survivors into Palestine. He founded and chaired the Conference on Jewish Material Claims against Germany and led negotiations for restitution to the victims and to the State of Israel. From 1948 to 1968 Goldmann served as co-chairman and then president of the World Zionist Organization. From 1953 to 1977 he also served as president of the World Jewish Congress.