Avraham Obstfeld sits by a mirror in an apartment in Mielec Poland. 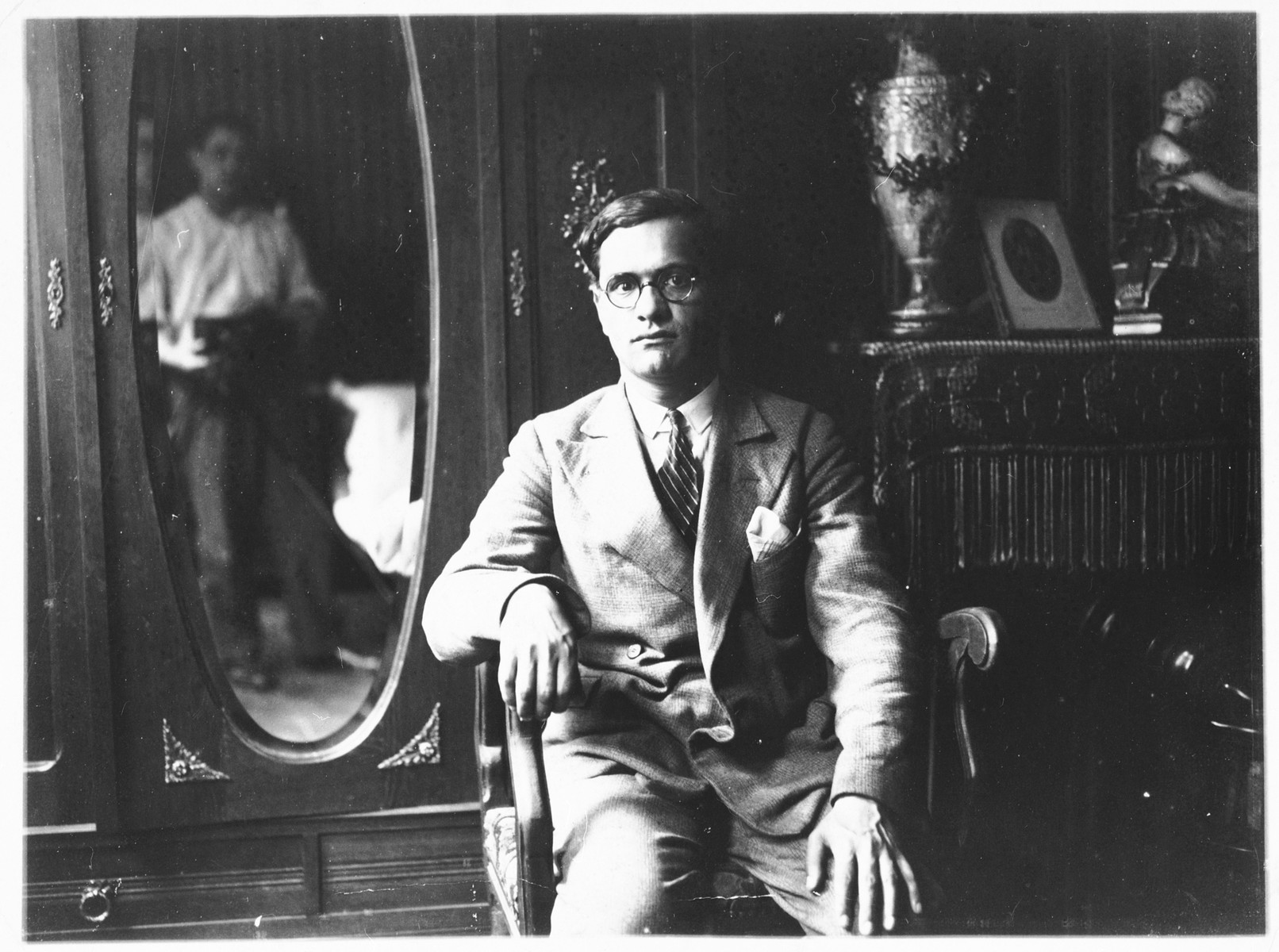 Avraham Obstfeld sits by a mirror in an apartment in Mielec Poland.

Biography
Norbert Vos-Obstfeld (born Norbert Obstfeld) is the son of Avraham and Lea (Zwaaf) Obstfeld. Avraham had moved to Belgium from Mielec, Poland. Lea was the middle child of Marc Zwaaf and Sara Zwaaf-Vos. She had a younger sister Emily. Her older sister Lilly was married to Maurice Da Cunha, and they had a little girl, Jacqueline, born in 1938. Maurice worked for his father-in-law's Indian import-export firm, and on May 1, 1940 he and Lilly set sail on a business trip to India. leaving Jacqueline in the care of her grandparents. Five days later Germany invaded Belgium. Some months later, after the Germans closed Avraham's business, Avraham and Lea fled to unoccupied France in the hope of crossing the border into Spain. Norbert was born the following year in Pau, France on July 19, 1941. Lea became anxious about the fate of her parents and refused to continue on to Spain. Instead, they decided to return to Belgium and settled in Brussels. Soon after their return, in July 1942, Avraham was arrested and sent to the Malines transit camp. From there he was placed on the 13th transport to an unnamed concentration camp where he perished. After his arrest, Lea moved to Antwerp to live with her parents. On August 28, 1942, police entered their apartment and arrested Lea's parents, Emily, and Jacqueline and brought them to a school which was serving as an assembly center. Lea and Norbert were not on the list, since they were registered in Brussels. Lea pretended to be a maid and prepared sandwiches for the others. After their departure, Lea went to the school to try to save them. Her parents were too afraid to leave, but they encouraged her to take her sister and niece. Lea somehow managed to lead them out of the school. Her parents were deported on the 7th transport from Malines to an unnamed concentration camp where they perished. Lea. Norbert, Emily and Jacqueline fled to Flanders. Lea found hiding places for Emily and Jacqueline in Otegem, and she and Norbert went to the home of a business associate of Avraham. Lea and Norbert, however, soon were forced to find a new shelter when their host started to harass Lea. Lea bought herself false identity papers and found work to support her family selling hospital and pharmacy supplies. One evening she returned from work to discover that Norbert had been beaten, so once again they moved to a new hiding place. Shortly after settling in, a local priest warned her that he knew she was Jewish and threatened to denounce her unless she agreed to convert to Christianity. Petrified, Lea fled with Norbert and a suitcase full of dirty diapers to Courtrai. She arrived in the unfamiliar town in November and walked to a café on the outskirts of the city. Exhausted and cold, she asked the owners if they knew of any rooms for rent. The owners, Raymond Verhage and Julia Verhage-Leenknecht, offered to shelter them, and Norbert and Lea remained in their home until the end of the war. In 1948 Lea remarried. Her second husband, Emile Vos, was a concentration camp survivor who had lost his wife and three sons. Emile adopted Norbert and gave him his name. In 1987 Yad Vashem honored Raymond Verhage and Julia Verhage-Leenknecht as Righteous Among the Nations.