Portrait of two Belgian Jewish siblings, one of whom is wearing a yellow Star of David. 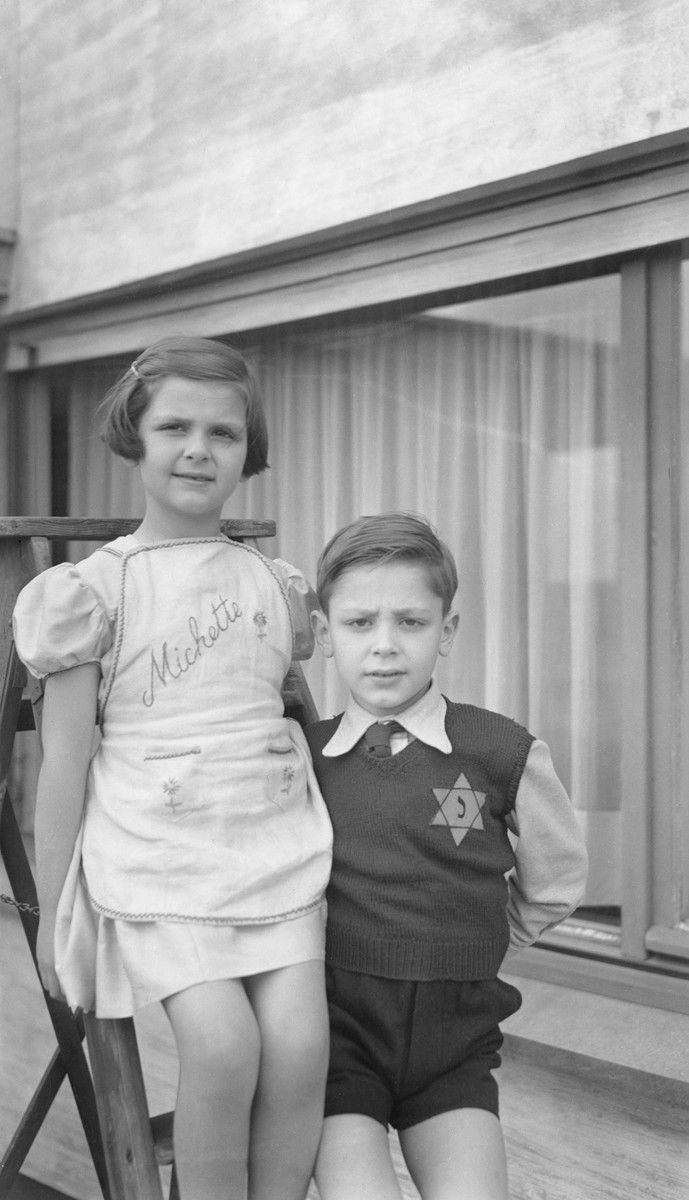 Portrait of two Belgian Jewish siblings, one of whom is wearing a yellow Star of David.

Pictured are Daniel and Myriam Wellner.

Biography
Daniel Wellner is the son of Jules Wellner (b. 1899) and Lucie Wellner-Rapoport (b. 1901). He was born June 9, 1934 in Antwerp, Belgium where his father worked as an architect and diamond merchant. Daniel had two siblings: Marcel Nahum (b. 1930) and Myriam (b. 1936). During the first two years of the German occupation the Wellners were able to cope with the relatively moderate restrictions put on their lives by the anti-Jewish decrees. However, by the summer of 1942 they became quite anxious about the threat of deportation to Poland. At this time Jules Wellner had a conversation with his Catholic attorney Pierre Charles Edouard Misselyn, in which he conveyed his fears about his family. When Pierre shared this conversation with his wife, Elisabeth, she suggested that they could help. Operating under the assumption that the Wellners had only one child, the Misselyns offered to shelter that child until the danger of deportation subsided. After paying a visit to the family, however, the Misselyns learned that there were in fact three children. Hiding their surprise, they extended their offer to take in all the Wellner children when the threat grew imminent. On the morning of September 12, 1942 Lucie Wellner phoned Elisabeth Misselyn in a state of panic asking her to pick up her children in 30 minutes at a specific location between their two homes. The three unaccompanied children had to pass three German sentries before reaching the meeting point. After their safe arrival, Elisabeth sent word to Lucie that "the three pastries have been delivered in good condition." The three Wellner children moved in with Pierre and Elisabeth and their eight children in a four-story house located at 37 Quinten Matsyslei in Antwerp. Marcel, Daniel and Myriam, who were given the aliases Francis, Christian and Mimi, were warmly welcomed and treated as full members of the family. To outsiders they were presented as cousins. Pierre Misselyn was assuming an enormous risk by hiding the children, since he himself had been arrested by the Germans at the end of World War I and sent to prison in Germany for passing fugitives through the heavily guarded Belgian-Dutch border. He had led a prison revolt and succeeded in commandeering a train to Belgium. On October 30, 1942 Pierre and Elisabeth Misselyn paid a discrete visit to Jules and Lucie Wellner to try to arrange hiding places for them and their parents. Pierre returned the following day to discover that the family, including Jules' mother and Lucie's father, had just been arrested. They were subsequently deported to Auschwitz, and none of them survived. Alarmed by the news, the Misselyns established emergency procedures to protect the Wellner children. When the children heard a special ring on the house intercom, they were supposed to come downstairs, slip out the back door, and make their way to the St. Joseph's church, two blocks away, where they were to wait for an all-clear sign. A different type of ring signaled a higher level of emergency where there was time only to hide under the table which was covered by a large tablecloth. These two procedures were used seven times and once respectively. Despite these precautions the Wellner children were almost captured in 1943. One weekend the Misselyn's maid, who was absent without leave, was spotted at the railroad station with a German soldier. After a dramatic confrontation with the Misselyns, she left for good without giving her whereabouts. On September 8, 1943, the family was staying at their country home a short distance from town when they heard about the surrender of Italy. While they were celebrating, Pierre Misselyn came from Antwerp and announced that the Germans had come looking for the children, and that he had to appear the next day before the Gestapo. The following morning, the Misselyn family and Wellner children returned to Antwerp. Pierre, however, went alone to the Gestapo. When asked why he didn't bring the children, he responded that it wasn't honorable. Pierre tried to strike a deal with the officer, offering to take in three German children orphaned by the Allied bombing, if he was allowed to keep the Jewish children. The Gestapo agent angrily rejected his offer and threatened to arrest the entire family, but then inexplicably dismissed Pierre. Soon after, the staff of the Antwerp Gestapo was rotated out, and the Misselyn family suffered no further consequences. The three Wellner children survived the war, and Marcel later married the youngest of the Misselyn daughters. In 1990 Pierre and Elizabeth Misselyn were recognized by Yad Vashem as Righteous Among the Nations.