Nazi propaganda slide featuring images of Wilhelm Gustloff, leader of the NSDAP's foreign organization in Switzerland (left), and David Frankfurter, the Jewish student who assassinated him in 1936 (right). 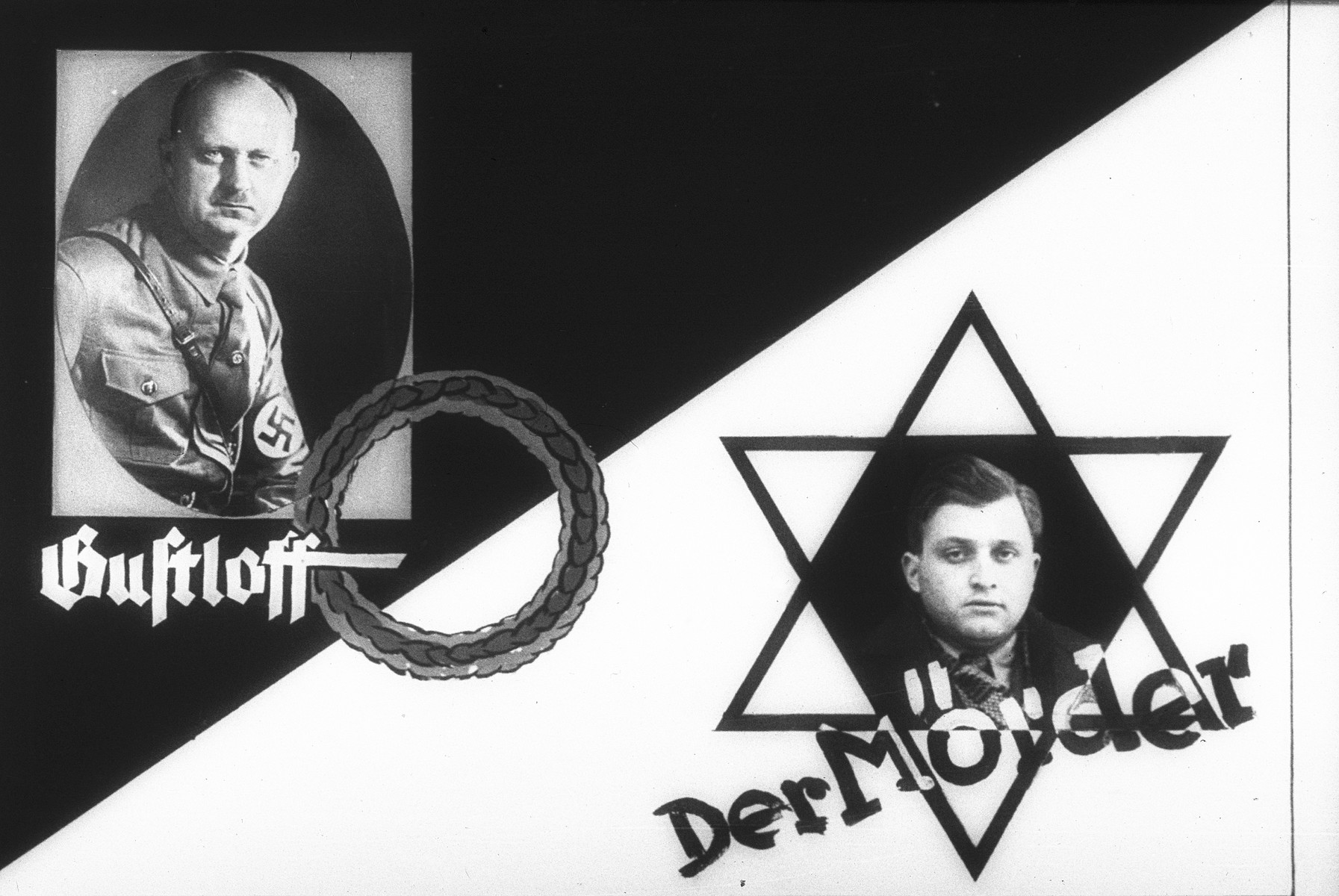 Nazi propaganda slide featuring images of Wilhelm Gustloff, leader of the NSDAP's foreign organization in Switzerland (left), and David Frankfurter, the Jewish student who assassinated him in 1936 (right).

The image of Frankfurter is framed by a Star of David, with the words "The Murderer" written beneath.

Event History
One image from a slide lecture produced by "Der Reichsfuehrer SS, der Chef des Rasse-und Siedlungshauptamtes" [the Leader of the SS, the Chief of the Race and Settlement Main Office]. The slide lecture, entitled "Das Judentum, seine blutsgebundene Wesensart in Vergangenheit und Gegenwart" [Jewry, Its Blood-based Essence in Past and Future], is Part I of the thematic series, "Judentum, Freimaurerei, Bolschewismus" [Jewry, Freemasonry, Bolshevism]. The text of the slide lecture is available at the Bundesarchiv Koblenz, record group number NS31/163.
Biography
David Frankfurter (1909-1982), Jewish medical student who assassinated Nazi leader Wilhelm Gustloff. Born in Daruvar, Croatia, Frankfurter was the son of the local rabbi. In 1929 Frankfurter began to study medicine, first in Leipzig and later in Frankfurt, where he witnessed the growing power of the Nazi movement. He moved to Bern, Switzerland, in 1934 to continue his medical studies, but continued to follow developments inside the Third Reich. In November 1935 Frankfurter began to follow the activities of Wilhelm Gustloff, the National Socialist leader of Switzerland. On February 4, 1936, Frankfurter traveled to the resort town of Davos and assassinated Gustloff. He then surrendered to the Swiss police. His trial began in Chur on December 9, 1936. Though his action was applauded among large sections of the Swiss population, Frankfurter was convicted and sentenced to 18 years in prison. On February 27, 1945, as Germany neared collapse, Frankfurter applied and was granted a pardon. He was released, but forced to leave Switzerland. He then moved to Palestine and settled in Tel Aviv. Eventually, the Swiss government rescinded Frankfurter's formal banishment from the country.