A group of newly liberated Jews pose with Soviet and American soldiers who were passing through the town of Losice. 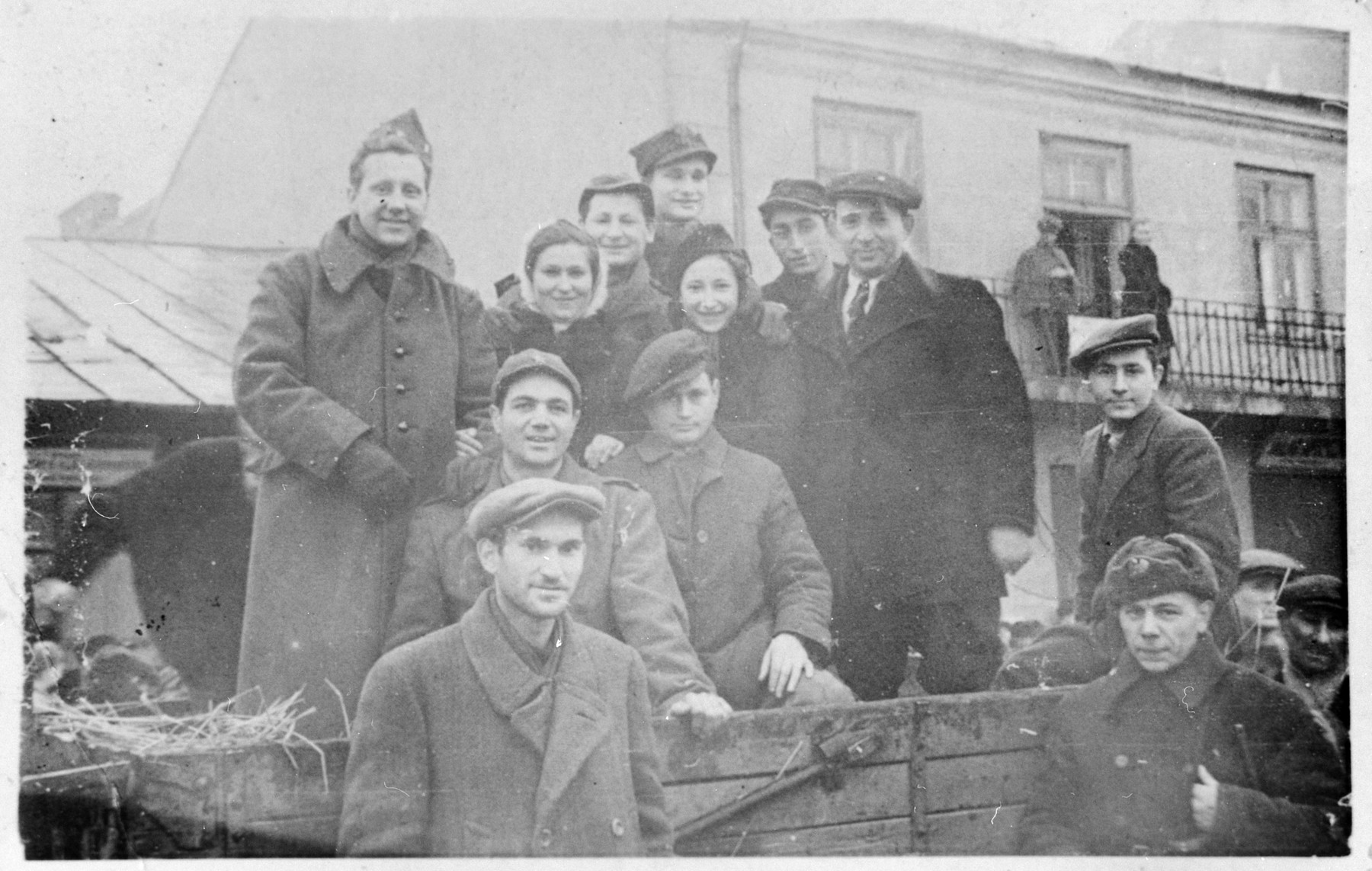 A group of newly liberated Jews pose with Soviet and American soldiers who were passing through the town of Losice.

The American soldiers had been taken captive after the Battle of the Bulge and were liberated by the Soviet army. They were on their way back to the United States via Moscow. After discovering that the soldiers were also Jewish, the Jews of Losice communicated with them in Yiddish.

Biography
David Gewirtzman (born Berl Losice) is the oldest son of Yankiel and Henia Losice. He was born on April 15, 1928 in Losice Poland where his father was a grain merchant, and his family had lived for 500 years. His sister Rivke was born on November 6, 1930 and his brother Yitzhak was born on August 15, 1932. On December 1, 1941 a ghetto was established in Losice surrounded by barbed wire. Most of the ghetto's Jews were deported to Treblinka eight months later on August 22 1942. The Losice family escaped deportation by hiding for three days in a cramped attic. On August 25, Berl and Rivke left the hiding place to make contact with a Polish farmer. On their way home, a Polish policeman arrested the children. They were thrown in prison and sentenced to death. However, on the same day, a Polish boy and a girl also were arrested for stealing items that had previously belonged to Jews in the ghetto. German guards mixed up the two sets of children and executed the Polish children by mistake. Berl and Rivke were eventually released and along with the rest of their family were sent to a new smaller ghetto. The new ghetto consisted of five houses housing approximately fifty Jews who temporarily had escaped deportation. They stayed in the camp for about two months before hearing rumors of new impending deportations. Ironically, the same policeman who had arrested Berl and Rivke now felt remorse for having arrested so young a girl and offered to hide and care for her. On November 9 Rivke left the ghetto to live with the policeman and his wife. Yankiel continued to search for hiding places for the rest of the family. Through various contacts he found an impoverished peasant who agreed to hide the bulk of the family in exchange for money. Yitzhak, who was then only ten years old, was sent to live with a different peasant who at the time was considered to be more reliable. For the next two years Yitzhak stayed hidden inside a haystack; by the time he left the spot, he had forgotten how to talk or walk. On November 18, 1942, Wacek, a Polish friend, brought Berl, his parents, his maternal aunt and uncle and their two children, Oskar and Belcia Pinkus to the farm of Stanislaw Szczerbicki in the town of Koszelowska. The farmer hid the seven family members in a hole in the floor of his pigsty 8 feet by 4 feet, and 3 feet deep. For the next two years, the family remained underground, emerging for fresh air only for short intervals at night. They kept occupied by playing chess and cards, telling stories and reading newspapers the peasant brought from town. However, they had to contend with rats, bedbugs, inadequate food and water, and leaking manure from the sty. After seven months, Yankiel had a premonition that Rivke was in danger. He sent Wacek to check. He returned with the girl after learning that the policeman felt he no longer could safely hide her and was prepared to kill her that very night in desperation. Though Szczerbicki originally agreed to hide the family for the financial gain, he kept them even once they could no longer pay, at great risk to his own life. The Losice family remained hidden until the Soviet army captured the area in the summer of 1944. At liberation, only sixteen Jews survived from Losice. However, members of the Polish Home Army murdered one survivor shortly thereafter in a postwar pogrom in the neighboring town of Mordy. The remaining Jews felt it was no longer safe to remain in Losice and fled to Lodz where large numbers of Polish Jews were gathering. In April 1945, Berl along with his cousin Belcia Pinkus, fled with the Bricha in the hopes of immigrating to Palestine. They traveled to Romania, Hungary, and Austria and came eventually to Italy where they joined Kibbutz Behazit in Lido di Roma, twenty kilometers from Rome. In January 1946 Berl sent a note to his parents telling them where he was and received a cable in response saying they were in Italy as well. Though the rest of the Kibbutz went to La Spezia harbor to board an illegal ship for Palestine, Berl and his cousin remained behind after his parents begged him to keep the family intact. As a family they immigrated to the United States to join an uncle who had previously come. There they adopted the new name, Gewirtzman.