Two Jewish teenagers pose in a horse-drawn wagon in Bilki. 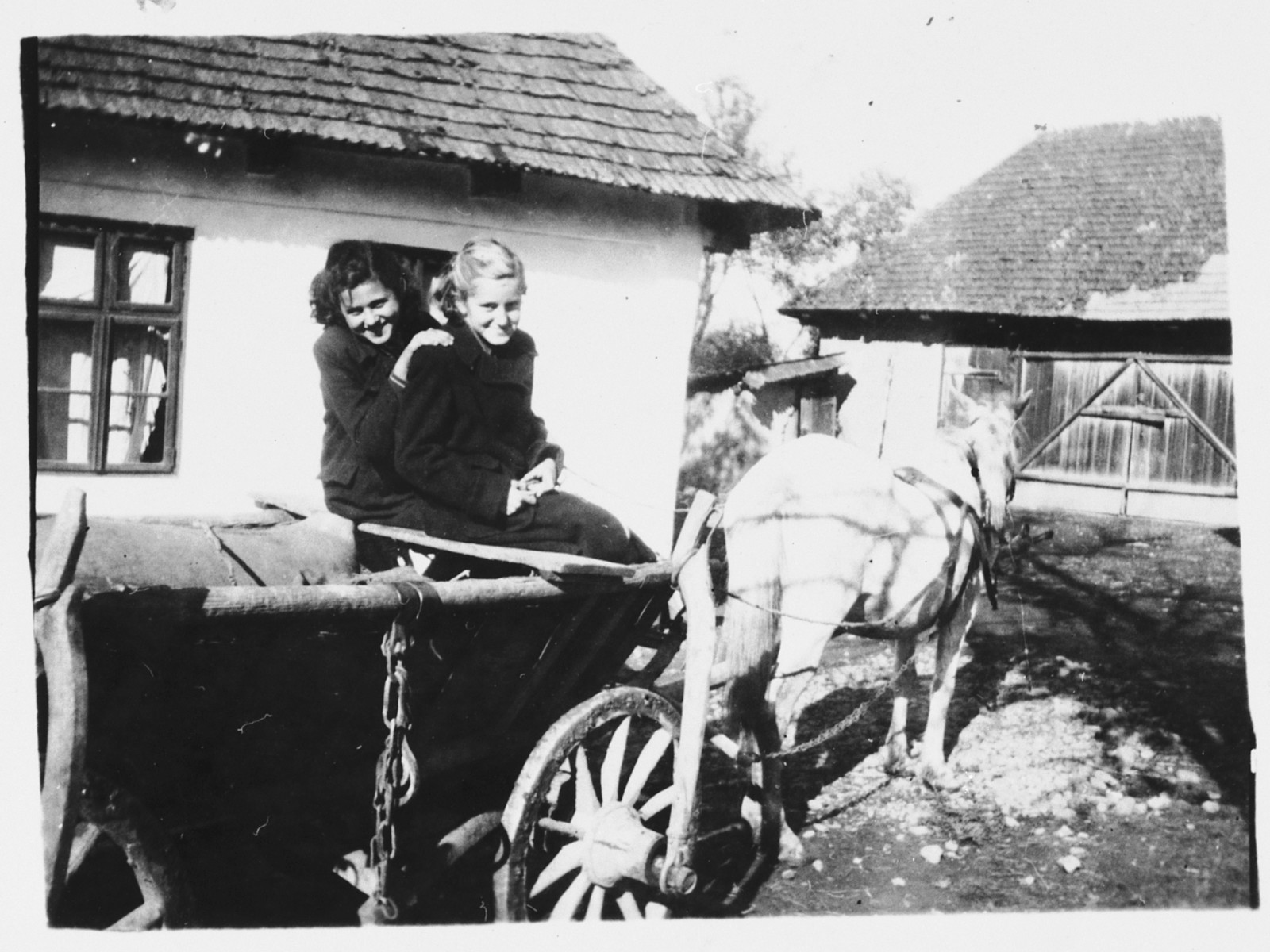 Two Jewish teenagers pose in a horse-drawn wagon in Bilki.

Biography
Magda Berkman (born Magdalena Mermelstein) is the daughter of Ludwig and Bella (Weisz) Mermelstein. She was born January 11, 1929 in Bilki, Czechoslovakia, where her father owned a wine and liquor distillery. This liberal orthodox Jewish family was related to the Hassidic Sepinker Rebe. Magdalena had four siblings: Israel (b. 1930), Hana (b. 1932), Violet (b. 1933) and Edward (b. 1935). During her youth Magdalena belonged to the revisionist Zionist Betar youth movement. After Transcarpathia came under Hungarian rule on March 15, 1939, Ludwig's business was confiscated. In 1943, Magdalena went to live with her mother's sister, Rezsi Berger, and her daughter, Ava, in Ujpest (near Budapest) in order to study for entrance exams for the Mukacevo gymnasium. She was supposed to return home in the spring of 1944, but remained with her aunt when she learned that her family had been relocated to a ghetto in Berehovo. From there, the family was deported to Auschwitz. Magdalena's mother and three youngest siblings were killed immediately. Her father and brother, Israel, were transferred to Dachau, where they later perished. Not long after her family was deported, Magdalena, Rezsi and Ava were themselves transferred to a ghetto and then sent to Auschwitz. Rezsi was killed immediately, but Ava and Magdalena were taken to Lager C. To their surprise, they met Bella and Rezsi's two other sisters, Choli and Raizel, as well as other friends from Bilki who had preceded them to Auschwitz. After three months, Bella and Raizel were transferred to a labor camp in Luebberstadt (near Bremen), where they worked in a munitions factory. Choli and Ava were sent to another work camp. Raizel subsequently died from malnutrition in early 1945. During the evacuation of Luebberstadt in the spring of 1945, the female prisoners were boarded onto trains. The trains were hit by Allied bombs and several of the women were killed. The survivors were then put on a death march moving in the direction of Hamburg. As they approached Hamburg, the women were again boarded onto a train. At this point, a German civilian called out to the women and warned them to escape because the guards were planning to blow up the train. The prisoners scattered, and soon their guards fled as well. A short time later, on May 3, 1945, the women were liberated by a British Jewish officer. Magdalena was then 16 years old. She was taken to a resort in Germany to recuperate and after three months asked to return to home. In August, Magdalena went to Budapest and found her great uncle Ignatz Laslow, who had survived along with his wife. There she also met her aunt Choli whom she had last seen in Auschwitz. After a few weeks, Magdalena and Choli returned to Bilki hoping to find additional family members. They discovered that all of the Mermelsteins had perished and that neighbors had taken over the family's home and possessions. Magdalena did recover her family's photo album, which had been saved by a Christian neighbor. The two women remained in Bilki for about two months and then decided to go to Czechoslovakia. They were shot at by guards as they crossed the border but soon reached safety. They proceeded to purchase train tickets to Prague, using whiskey and cigarettes instead of money. After a few months in Prague, Magdalena joined a children's transport travelling to Paris. She and Choli hoped to immigrate to America but decided they would have a better chance of obtaining visas if they travelled separately. In Paris, Magdalena first stayed with relatives, and then in a home for young people near Versailles. From Paris, Magdalena travelled to England, where she got passage to Canada aboard the Queen Mary. Finally, in November 1947, she obtained an American visa and rejoined the remnants of her family in Cleveland.