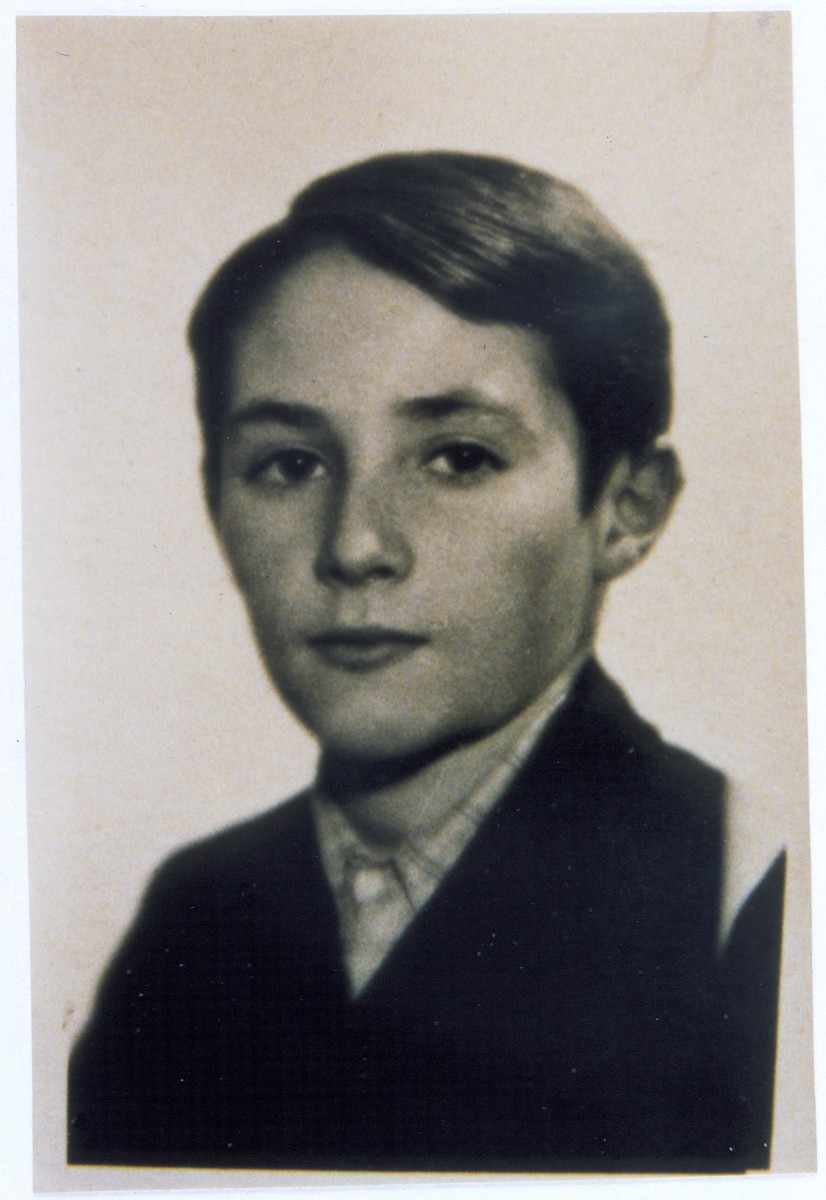 The photograph was taken by a Jewish photographer in the ghetto who specialized in taking photos specifically in preparing false IDs.

Biography
Uri Orlev (born Jurek Henryk Orlowski) is the son of Zofia Zelda and Maximillian Orlowski. He was born on February 24, 1931 in Warsaw where his father was a physician. He had one younger brother, Kazik (b. 1933). Jurek's parents were not religious and had left-wing political views. At the outbreak of World War II, Maximillian, then an officer in the Polish army, was mobilized and sent to the East. He was taken prisoner in the Soviet Union and the family lost contact with him. Zofia and the two boys, as well as her father-in-law and sister-in-law, Steffa, moved to an apartment closer to the center of the city, where she thought it would be safer. During the first winter of the occupation, the Germans shot and killed Jurek's grandfather. In October 1940 the Orlowskis were forced to move into the Warsaw ghetto. In late 1942, Zofia became ill and eventually had to be hospitalized, leaving the care of the boys to Steffa. When in January 1943 the Germans raided the ghetto hospital and shot all the patients, Zofia was among the victims. After her death, Steffa resolved to save herself and her nephews. She arranged to obtain false papers, and in February 1943, they all went into hiding on the Aryan side of Warsaw. They briefly hid in an attic but soon left the city to seek shelter in a rural village. There, they lived in an unfinished mud cellar. They left their hiding place only for a few hours once a week in the middle of the night. Jurek and his brother entertained themselves by playing with toy soldiers, reenacting the exploits of famous generals. Steffa heard of a way to obtain Palestine certificates in order to emigrate from Nazi-occupied Poland and managed to obtain them for herself, the two boys and her boyfriend. They boarded a train, but instead of going to Palestine they ended up in the so-called "residence camp" of Bergen-Belsen. This enclosure housed several thousand Jewish prisoners under the pretext that they would be exchanged for German nationals held by the western Allies. They arrived in Bergen-Belsen on July 15, 1943. At first living conditions were relatively tolerable, but they deteriorated over time, especially after Bergen-Belsen was redesignated as a concentration camp. In December 1944, as Allied forces approached the camp in the spring of 1945, the prisoners were evacuated. Jurek and Kazik left Bergen-Belsen on April 7 and were liberated one week later, on April 13, 1945, by Americans from the 9th Army in Falersleben not far from Magdeburg. The Americans brought the survivors to a village called Hillersleben and gave the local residents five minutes to evacuate to make room for them. After the war Steffa and her boyfriend decided to immigrate to South Africa; she planned to bring over the boys once they were financially secure. Jurek and Kazek went to Belgium and then France, where they joined a children's transport to Palestine. After they arrived in Palestine, the boys were asked which youth movement they belonged to. Not familiar with any of them, Jurek selected Gordonia, since he thought it was somehow connected to the hero of Khartoum, General Gordon, who had figured in his battle reenactments with his toy soldiers. Jurek remained in Israel, and his brother later moved to the United States. In 1954 their father, whom they had last seen at the start of the war, also immigrated to Israel. Jurek (now Uri) lives in Jerusalem. In 1996, he received the Hans Christian Andersen Award, the highest international recognition given to an author of children's books, for his lasting contribution to children's literature.