Itzhak Gendelman serves as the godfather at the circumcision of Arele Werkel, the son of Taibel and Yehiel Greenberg at the Ebelsberg displaced persons camp near Linz, Austria. 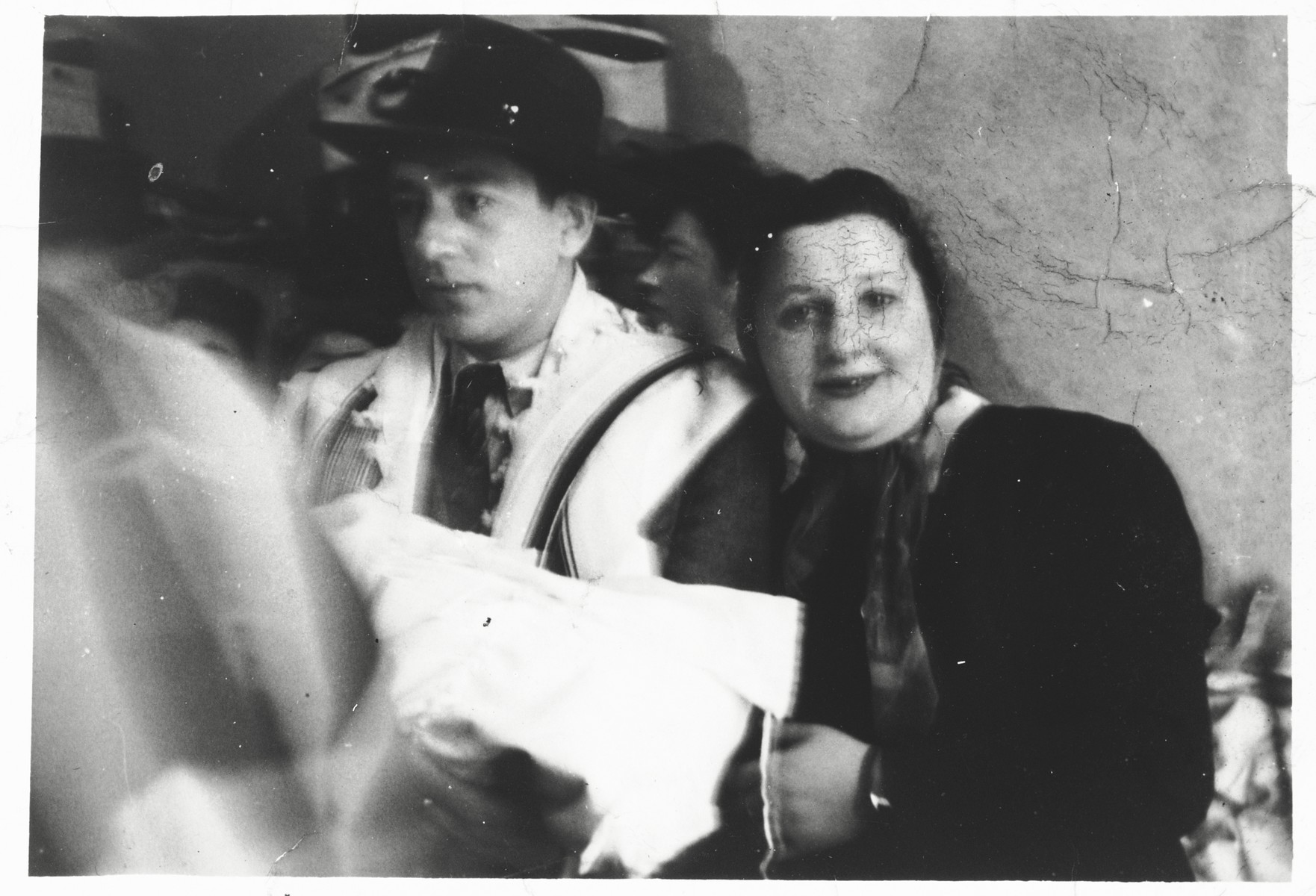 Itzhak Gendelman serves as the godfather at the circumcision of Arele Werkel, the son of Taibel and Yehiel Greenberg at the Ebelsberg displaced persons camp near Linz, Austria.

Among those pictured are Itzhak Gendelman (holding the baby) and Marim Broder.

The Greenberg family, Srolik, Yentel and their daughter, Taibel, were from Rokitno, Poland. When the Germans advanced into the Sarny district in the summer of 1941, Taibel retreated with the Soviet army and eventually made her way to Tashkent, Uzbekistan, where she lived out the rest of the war. Srolik and Yentel remained in Rokitno and were rounded-up during the final liquidation of the ghetto in late August 1942. During the chaos of the round-up, Srolik and Yentel became separated. Yentel fled to the home of a Polish peasant family, while Srolik, who had initially escaped, was caught and put on the deportation train to Sarny. During the killing action that took place in Sarny on August 27-28, 1942, Srolik volunteered to collect the victims' clothing and load it on the trucks. While moving the piles of clothes, he found many valuables that the Jews had hidden away and pocketed them for his own protection. He then concealed himself among the clothing on the back of a truck. When the German drivers pulled away from the site, he knocked on the cab of the truck and offered the drivers the valuables he had collected in exchange for his freedom. The drivers let him go, and Srolik fled to the home of a peasant family he knew near Rokitno. For the next eleven months he lived under the assumption that his wife had been killed during the liquidation of the ghetto, until one of the peasants who sheltered him came to him with an offer. He would tell Srolik where his wife was hiding in exchange for some vodka. Somehow Srolik found the liquor and was taken to his wife in the forest, where she was hiding with some other relatives. They survived the war together and returned to Rokitno in 1944, where they were later reunited with their daughter. In the spring of 1945 they fled to Austria and settled in the Ebelsberg displaced persons camp. Taibel married Yehiel Werkel and gave birth to a son, Arele, in Ebensberg in 1947 or 1948. Soon after the founding of the Jewish State, the extended Greenberg family immigrated to Israel.