Ernest Lebovics recuperates in an army hospital in Szeged. 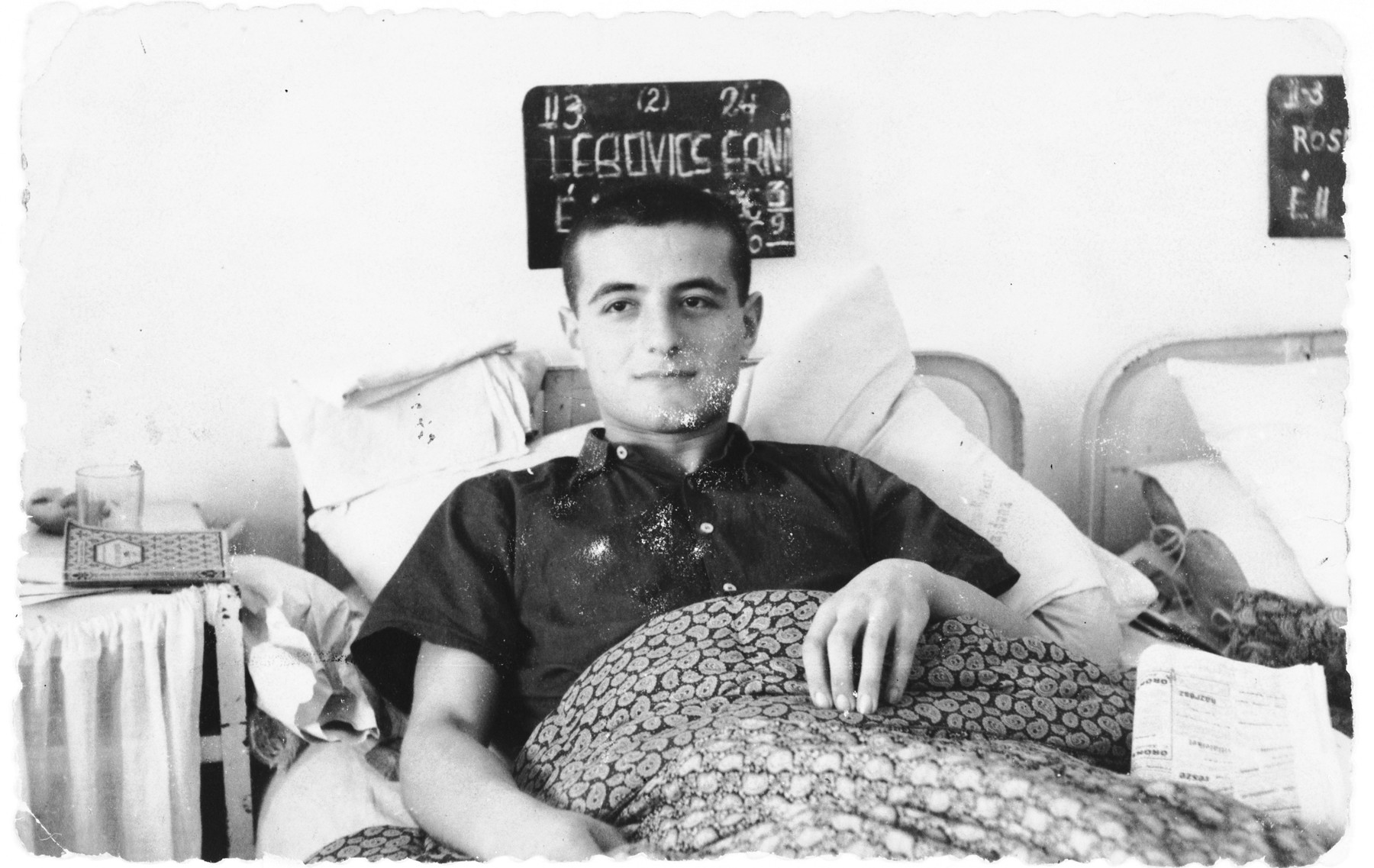 Ernest Lebovics recuperates in an army hospital in Szeged.

Biography
Ernest Lebowiz (now Light) is the son of Herman and Sima (Pollack). He was born in Chudlovo, Czechoslovakia in 1921, the youngest of ten children. He had five brothers, Ephraim Baruch, Aryeh Leib, Yisroel Yaakov, Alex, and Jeno, and four sisters Beila, Etosh, Sora (Charlotte) and Raizel. His father owned farmland, ran a distillery and sold lumber. In March 1939, Hungary occupied and annexed part of Czechoslovakia, and in 1941, Ernest was inducted into the Hungarian army. However shortly after he completed basic training, Germany declared war on the Soviet Union, and all Jewish soldiers were removed from the army and sent to labor battalions. Ernest was sent to work on various projects and enjoyed relatively good treatment. However, while building a canal in Bor, Yugoslavia, he became badly injured. Ernest was taken to a Hungarian military hospital in Szeged, and after a six-week hospitalization, he was sent home. His parents, a handicapped brother, and one sister with her baby were still there. His other siblings were either still in labor camps or living elsewhere. The day after his return, the Germans occupied Hungary, and the following month, on April 17 or 18, Chudlovo's Jews were ordered to assemble in the local synagogue. From there, they were sent to an abandoned brick factory where they were held with about 10,000 Jews from neighboring towns and the city of Ungvar. Near the end of May they were shipped by railcar to Auschwitz. Herman, Sima, the handicapped brother, sister and young child were killed immediately. After three days, Ernest and his nephew Peter, who was only five years younger, were sent to Warsaw where they were put to work dismantling the former Warsaw ghetto and salvaging worthwhile building material to ship to Germany. After a few days, Ernest was selected to do janitorial work in the SS headquarters in Warsaw. There he enjoyed somewhat better working conditions and received extra food as well. As the Soviet army approached Warsaw, the Germans evacuated the labor camp. On July 29, 1944, they marched the prisoners to Kutno where they boarded trains to Dachau. When they arrived on August 9, only some 2,000 of the original group of 3,500 were still alive. A week later, Ernest was sent by passenger car to Muhldorf where he worked at various assignments until his liberation some nine months later. On April 27, 1945, the Germans abandoned the camp and put all the prisoners on cattle cars. A few days later the train came under Allied attack, the German guards escaped and eventually the prisoners were free. Ernest, who weighed only eighty pounds, spent the next few weeks recuperating in a hospital and then returned to Czechoslovakia to search for his family. He found his oldest brother Feri who had survived the war with his wife in Slovakia. Feris's son, Peter, who had been with Ernest for much of the time, also survived, but his other two children had perished. Ernest eventually found Alex and Jeno, who had survived the war in the Soviet Union. His other three sisters and two brothers died. Jeno, Alex and Ernest decided to come to Pittsburgh to join their sister, Charlotte, who had immigrated before the war. They arrived in the United States in August 1946 and settled in Pittsburgh, Pennsylvania. In 1952 Ernest married Sara (Sztejnsznajd) Stein, originally from Luck Poland.