Group portrait of six young Jewish survivors who were recruited by the Bricha in Budapest to serve at the Szengothard crossing on the Hungarian-Austrian border. 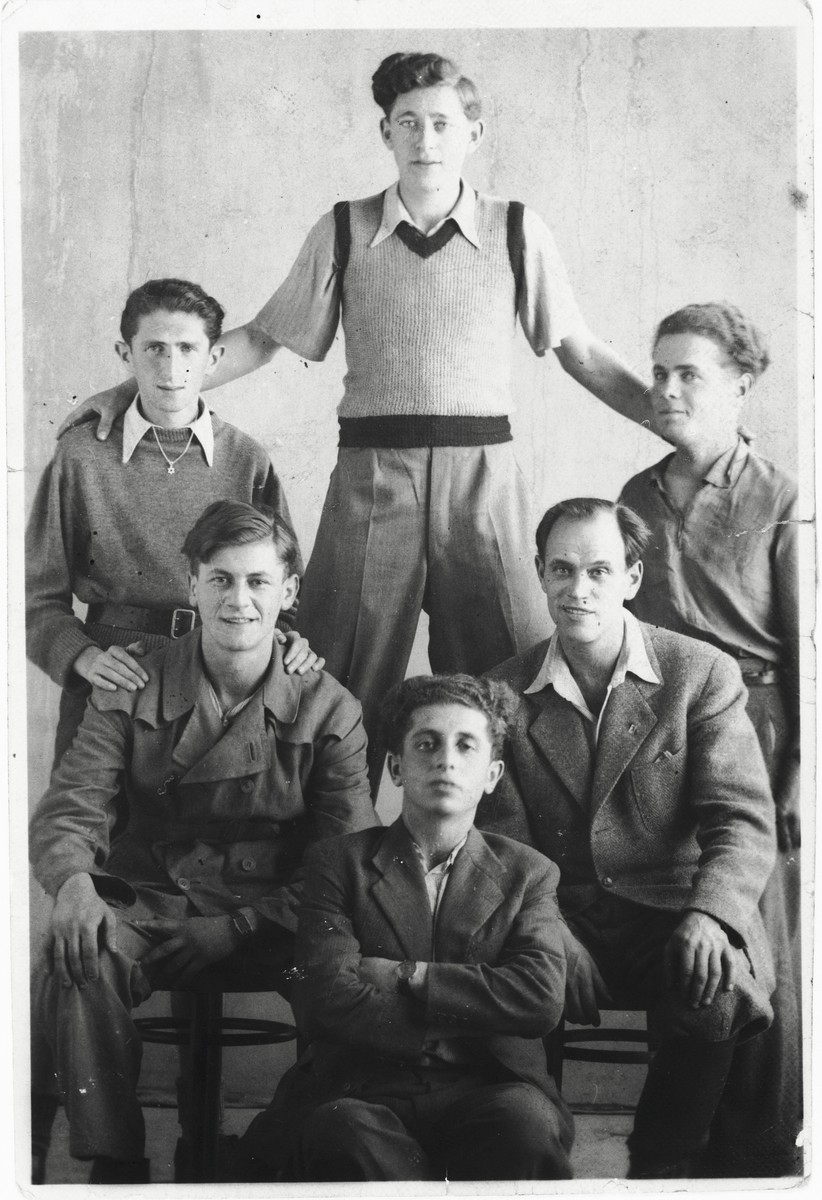 Group portrait of six young Jewish survivors who were recruited by the Bricha in Budapest to serve at the Szengothard crossing on the Hungarian-Austrian border.

Among those pictured is Itzhak Gendelman (top).

https://encyclopedia.ushmm.org/content/en/article/brihah.
Biography
Itzhak (now Isaac) Gendelman is the son of Asher and Chana (Pick) Gendelman. He was born November 17, 1925, in Rokitno, Poland (Sarny district), where his family had lived for generations. His father owned a grocery store, which provided only a modest income for the family. Itzhak had four siblings: Thema (b. circa 1920), Moniek (b. 1922), Rivka (b. 1930) and Noach (b. 1935). He grew up in a traditional Jewish household, in which the Sabbath and holidays were observed. He attended the Tarbut Hebrew language school and was a member of the local chapter of the Hashomer Hatzair Zionist youth movement. Itzhak was entering his last year of high school when the Germans invaded Poland in September 1939 and Rokitno fell under Soviet occupation a few weeks later. The Germans reoccupied the town in July 1941 and immediately began to persecute the Jewish community. All Jewish males over the age of 15 were taken for forced labor. Since Itzhak was then turning 16, he too, was compelled to work along with his father. They worked in the same labor detail, usually digging trenches, moving stones or fixing railroad tracks. In the fall of 1941 the Jews were ordered to wear the yellow star. The following spring, a ghetto was established on one long street in Rokitno. Since their home was located on that street, the Gendelmans did not have to move, but they soon had to share their space with other families, as Jews from the surrounding villages were resettled into the Rokitno ghetto. In an effort to extort the wealth of the community, the Germans levied a heavy fine, ten rubles worth of gold per person, on the Jewish population, which the local Jewish council was forced to raise in whatever way it could. Finally, in the last week of August 1942, the ghetto was liquidated. On the appointed day, the Jewish community was ordered to assemble at the central market place early in the morning. Itzhak arrived with his family. (His brother Moniek had retreated with the Soviet army into Russia before the Germans reoccupied Rokitno. He was reported to have died of typhus, but the family never learned where and when he perished.) The crowd of Jews was surrounded by armed Ukrainian auxiliaries, who were posted in each of the buildings that bordered the market square. When one terrified woman screamed out, "Jews save yourselves; They are going to kill us!" pandemonium erupted as the Jews started to run in all directions and the Ukrainians opened fire on them. In the chaos, Itzhak managed to escape to the nearby forest, where he met up with other Jews from his town. The younger people soon split off from the adults, and Itzhak remained with a small group, ranging in age from 9 to 16 years old. For the next two years, he lived in the woods, forced to beg or steal food from local peasants. He moved around constantly in the expansive forest to avoid detection. Itzhak's parents and sibling were unable to flee during the liquidation of the Rokitno ghetto. It is not known whether they were shot in the market or whether they were killed in Sarny, where the surviving Jews of Rokitno were taken by train later that day and massacred on the site of an old tar factory. It is estimated that between 14,000 and 18,000 Jews were murdered in Sarny during the two-day killing action of August 27-28, 1942. After the liberation of the Sarny district by the Soviet army in 1944, Itzhak returned to Rokitno. On his way back, he narrowly escaped death when his train was attacked by Ukrainian nationalists. In Rokitno, Itzhak met up with Srolik and Yentel Greenberg, old family friends and neighbors, who immediately invited him to live with them. In order to evade conscription into the Soviet army, Itzhak took a job with the railroad authority in Sarny, which gave him an exemption from military service. Realizing there was no future for him in Poland, he joined the Greenbergs when they decided to leave for Germany. They arrived in Bytom in May or June 1945. There, Itzhak left the Greenbergs and joined a Bricha group headed for Budapest. Soon after he arrived in the Hungarian capital, he was recruited by the Bricha, along with five others, to serve at the border station of Szengothard, where he would help smuggle groups of Jews over the border from Hungary to Austria. Itzhak remained there for six months until he was tipped off by the Russians that the British were coming to arrest his group. At that point, he crossed the border by himself and went to Linz, where he settled in the Bindermichl displaced persons camp. Once there, he reunited with the Greenberg family, who were then living in the nearby DP camp of Ebelsberg. Initially, Itzhak intended to make use of his Bricha connections to obtain an immigration certificate to Palestine, but after making contact with his mother's sister, Anne Sherman (originally Henia Pick), in Washington, D.C., he decided to go to America. After waiting several years to get a visa, Itzhak finally arrived in the US on January 17, 1949. For the next four years he lived with his relatives and worked at his uncle's poultry house in southwest Washington. Subsequently, he went to work for the Shoppers Food Warehouse company and was married in 1954.