Postcard sent from Hans Oppenheimer to notify a change in barracks in the Westerbork transit camp. 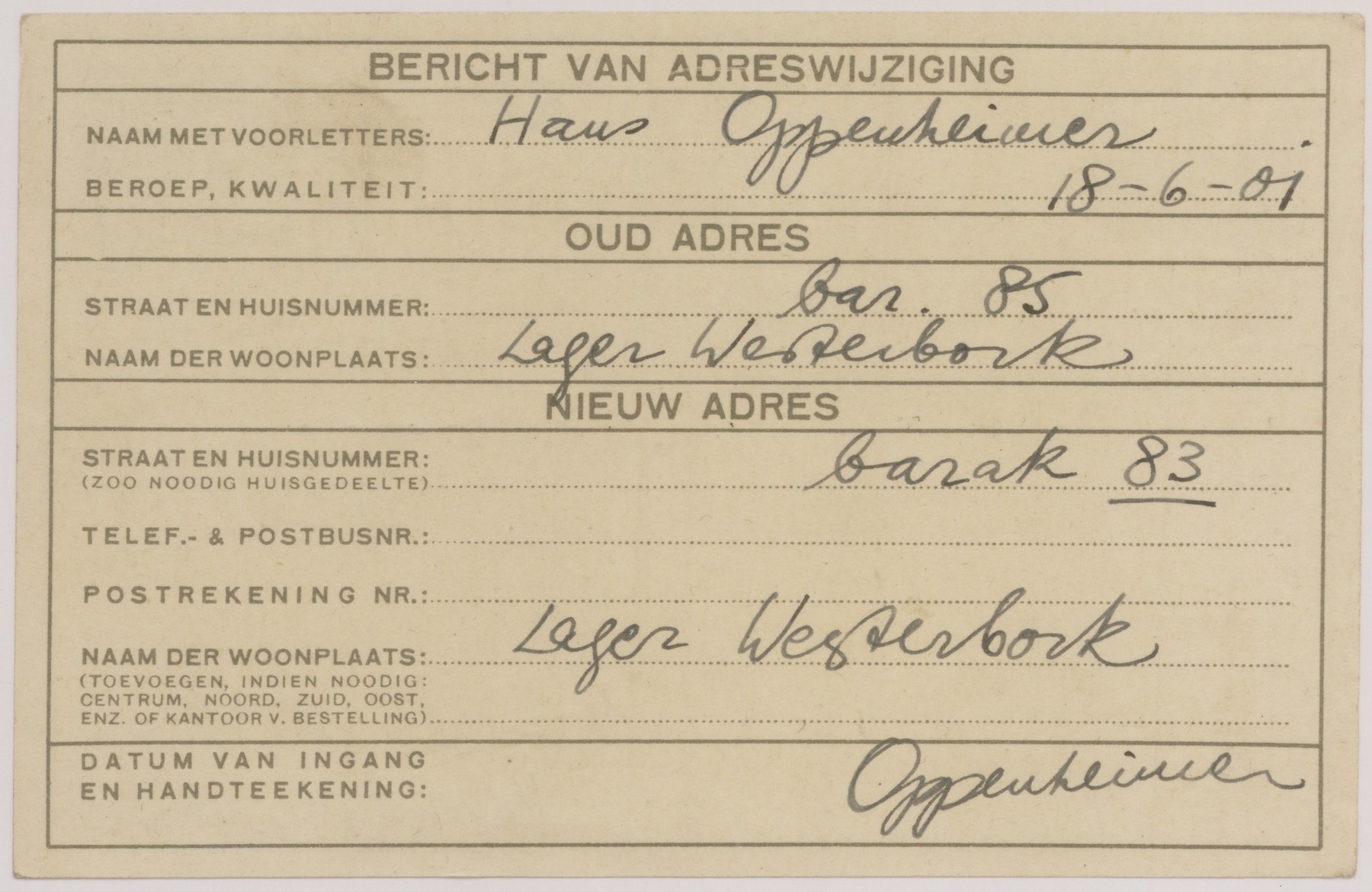 Postcard sent from Hans Oppenheimer to notify a change in barracks in the Westerbork transit camp.

https://encyclopedia.ushmm.org/content/en/article/westerbork.
Biography
Paul Oppenheimer is the son of Johann (Hans) and Friederike (Rita) (Furst) Oppenheimer. He was born on September 20, 1928 in Berlin, where his father was a bank official. His younger brother Rudi was born on October 1, 1931. In March 1936, Paul immigrated to England with his mother and brother. They stayed with his Uncle Rudi and Aunt Lotte Oppenheimer in London. Three months later, Friederike gave birth to a daughter, Eve, on June 23, 1936. Hans could not get permission to come to England, and eventually escaped to Heemstede, a small town in Holland, where he got a job in a bank. The rest of the family left England to join him in Heemstede in September 1936, and soon both Hans' and Rita's parents -- Josef and Meta Oppenheimer and Dr. Rudolf and Hedwig Furst -- joined them as well. After the German invasion of Holland in May 1940, the family was forbidden to live near coastal military fortifications and moved to Naarden. When the Germans later decreed that all Jews had to leave the countryside, the family moved to Amsterdam, where Paul attended a local Jewish school. In 1941 all four grandparents were taken to the Joodse Invalide, the Jewish old-age home in Amsterdam. Two years later, they were transported to the Westerbork transit camp and from there to Sobibor, where they perished in 1943. On June 20, 1943, the Oppenheimers were rounded-up during a house-to-house search and sent to Westerbork. However, owing to the fact that Eve was officially a British subject, the family was given a special status and classified as Blue Stamp prisoners. Since the Germans had considered exchanging these prisoners for German POWs, the family was exempted from deportation to Poland. On February 1, 1944 the Oppenheimers and other Blue Stamp prisoners were transferred to Bergen-Belsen by third-class rail carriages. Again, by virtue of their foreign papers they were kept in a separate camp known as the Stern Lager (Star camp) for prisoners who were candidates for exchange. Prisoners in this camp were allowed to wear their own civilian clothing with yellow stars. Hans was assigned work outside the camp, but Rita and the children were exempt from work. Conditions in the Stern Lager deteriorated as the war drew to a close. Rita died of starvation on January 17, 1945 in the Bergen-Belsen hospital. Three months later, on March 20, Hans also perished from disease and malnutrition. Eve was then transferred to an orphan's group run by an orthodox Jewish couple. On April 10, Paul and Rudi were placed on an evacuation transport from Bergen-Belsen. For the next two weeks, the train traveled during the night to avoid shelling by Allied warplanes. During the day, the prisoners were allowed to forage for food. On April 19 the train passed through Berlin, and on April 23 it arrived outside the village of Trobitz. The prisoners awoke in the morning to discover that the German guards had disappeared and Russian troops surrounded the train. However a few days later, both Rudi and Paul came down with typhoid fever and spent the next few weeks in a Russian hospital. After their release, the war had ended and they were sent by truck to Leipzig in the U.S. zone in preparation for their return to Holland. By coincidence, just as they were about to leave Leipzig, their sister Eve showed up on another truck, and the brothers were able to bring her back with them to Holland. They arrived in Holland on June 28, 1945 only to face new problems. Dutch police confiscated all the possessions they had acquired since liberation, and since the boys had been born in Germany, they were placed in a camp for Germans together with captured SS prisoners. It took several weeks before friends could arrange for their release. In September they were visited by their British uncle from London. Since Eve was a British subject, he was able to bring her back with him immediately. Six weeks later, Rudi and Paul obtained their visas and arrived in England on November 23, 1945.