Group portrait of members of the 2nd Polish Corps (Anders Army) during an excursion to the Sphinx in the Giza plateau near Cairo, Egypt, where they were stationed in the winter of 1944. 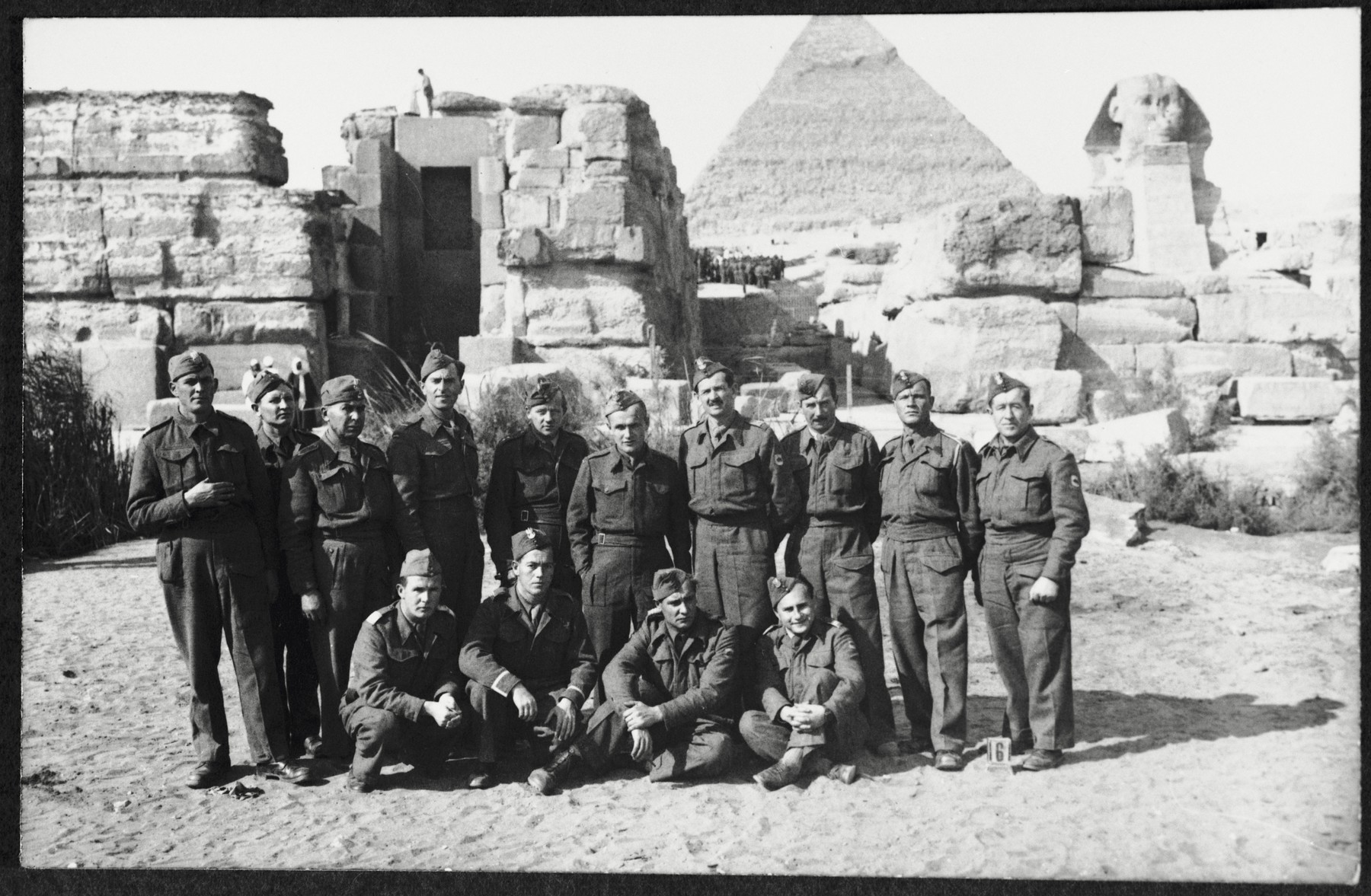 Group portrait of members of the 2nd Polish Corps (Anders Army) during an excursion to the Sphinx in the Giza plateau near Cairo, Egypt, where they were stationed in the winter of 1944.

Among those pictured are Markus Rosenzweig (standing fourth from the left), Jan Wysoki (sitting on the far right), and his friend Bolek Stankiewicz (standing second from right).

Biography
Marcus Rosen (born Markus Rosenzweig) is the son of Isaac and Frances (Zimetbaum) Rosenzweig. He was born October 16, 1912, in Krakow and was the youngest of four children. He had two brothers and a sister, all of whom were married by the start of World War II. As a young boy, Markus studied music for six years and later became a pianist in a jazz band. Markus completed a law degree at the Jagiellionian University in Krakow in 1935. He then began his five-year legal apprenticeship which was interrupted by the German invasion in September 1939. For the first 10 weeks of the occupation Markus remained in Krakow, where he suffered countless humiliations as a Jew. In October, he was dragooned by German troops into forced labor units, which were assigned such tasks as sweeping the streets in front of German quarters, carrying pails of coal from the cellar into the rooms of German soldiers, and cleaning their toilets. Fed up with this treatment and expecting the situation to get worse, Markus made the painful decision to leave his family and flee to Lvov in the Soviet-occupied zone of Poland, together with a small group of Jewish friends. They left on November 7. The following morning, after having crossed the San River near Przemysl, Markus and his friends were arrested by a Russian patrol for illegal entry and suspected espionage and thrown into prison in Przemysl. A month later they were transferred to a prison in Zhitomir. Another eight months passed before Markus was informed in September 1940 that he was being sentenced to three years in a Soviet labor camp. A few days later, he was transferred by train to the Nefto-Promysl 3 labor camp in Uchta (Komi ASSR) near the White Sea. There, he was made to fell trees and build roads in sub-zero temperatures while being fed barely enough to stay alive. Following the German attack on the Soviet Union in June 1941, the Polish Government-in-Exile in London signed an agreement with the Soviets, which provided for the release of Polish prisoners in Soviet labor camps and the formation of a Polish army in the USSR under the leadership of General Wladyslaw Anders. Immediately upon his release, Markus joined the new Polish army. He was assigned to the staff of the Osrodek Organizacji Armji (army central organization), where he performed a variety of administrative tasks. Though Markus himself did not suffer from anti-Jewish prejudice in the new Polish army (and in fact was promoted to corporal in March 1942), he knew he was the exception rather than the rule. Anti-Semitic feeling was prevalent, and there was a concerted effort by Anders and his senior officers to disqualify or discharge as many Jews as possible. This was particularly true during the period when the army was preparing to leave Russia. Even at the last possible moment at the port of embarkation in Krasnovodsk, efforts were made to leave Jews behind. It was only the threat of the NKVD (the Soviet secret police) to halt the evacuation if the Jewish soldiers were not taken, that prevented the Polish officers from abandoning them. In 1942 the whole army was transferred first to Iran and then to Iraq, where they underwent military training in the desert. It was at this time that the Polish army was formally incorporated into the 8th British Army as the 2nd Polish Corps. A year later, in the summer of 1943, the Polish Corps was transferred to Palestine. Markus' unit was stationed in Hadera (Gedera). During the next six months it is estimated that 2,000 Jewish soldiers in the Polish Corps deserted (with the assistance of the Yishuv and the tacit cooperation of the Corps leadership). Markus ultimately decided not to desert, out of an intense desire to fight the Nazis (as both a Jew and a Pole) and to rejoin his family (whose fate he did not then know). He also felt he would not be able to live with himself knowing he had deserted. In January 1944 he went with his unit to Egypt, and soon after, sailed for Italy, where he participated in the battle of Monte Casino. Shortly afterwards he fell sick and was hospitalized. He never returned to battle. Markus remained in Italy until August 1946, when he was transferred to England. He was formally demobilized in March 1947. At this point he was given the option of remaining in England or returning to Poland. He opted for the former. For a time he lived in Glasgow, before moving to London. In 1949 he married Chaja (Ringelheim) Rosenfeld, and in June of that year immigrated to the United States. In 1946 Markus made contact with his brother Jehuda in Krakow, who had been liberated at Sachsenhausen. From him, Markus learned that the rest of their extended family had perished in German concentration camps in Poland.