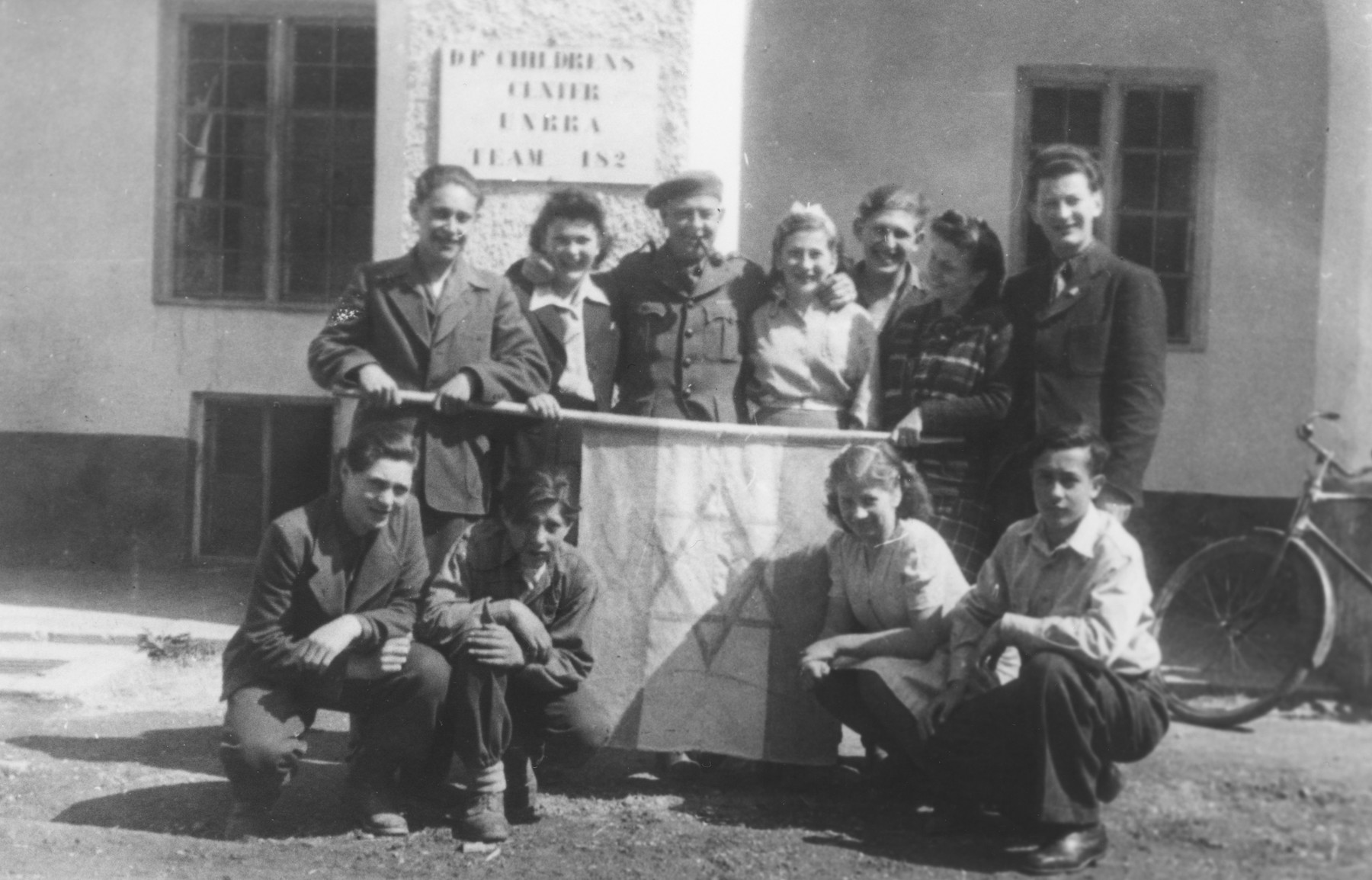 Event History
Prien am Chiemsee, the children's Displaced Persons camp in the Munich district, was established in 1946 (exact date unknown) and by October 19, 1946 housed 172 Jewish children. It reached its peak population on March 10, 1947, at which time there were 225 children. By December, 1948 the Jewish children were gone and it became a YMCA training center. The camp closed on June 6, 1949.
Biography
Zoltan Farkas is the son of Jeno Farkas and Frieda Frenkel Farkas. He was born on December 29, 1927 in Ombod Romania where his father owned a general store and his mother worked part-time as a seamstress and helped with the store. Zoltan had four younger siblings Erwin (b. 1929), Eva (b. 1931), Judit (b. 1932) and Henrietta (b. 1935) and an older half brother Miksa-Sholom. Zoltan attended Romanian public school and cheder in the afternoon. In 1939 Zoltan went to study in a Jewish school in Miscolz where his uncle taught, and he later went to study in a yeshiva katana, essentially a glorified cheder. He was very religious and visited the Satmar rebbe several times. In 1940, Hungary occupied part of Transylvania, including Ombod, and the Farkas family experienced increasing antisemitism. Young Jewish men were conscripted into Hungarian forced labor brigades. Among them was Zoltan's half-brother who was sent to the Russian front in the Ukraine where he perished. In the spring of 1944 the Germany army marched into Hungary, and the town underwent a peaceful transition to German rule. However, within two months all of the Jews in the region were deported to Auschwitz. Hungarian police, under German orders, gathered all the Jews from the village into a school room and from there transported them by wagon to a ghetto in Satu Mare. In May they were shipped in closed cattle cars to Auschwitz. He and his family, except for his father who was taken on an a previous transport, were transported to Auschwitz on the third transport on the holiday of Shavuot. Following the selection upon arrival, Zoltan and Erwin were sent for labor and the rest of the family was immediately killed. Zoltan was tattooed with number A-7897 and Erwin with number A-7899. After spending several days in Auschwitz, Zoltan and Erwin were sent to Buna-Monowitz. Every day they marched to work in a huge factory with people from all over Europe including British prisoners-of-war. After a few months in the camp, the brothers were lucky to be assigned to shlosser commando, commando 90, where work was easier and a company of British prisoners also worked. The Kapo of the work brigade was a German werbrecher (criminal) who allowed the British prsioners-of-war to give their extra soup to the brothers. This kept the brothers from starving. When the Russians arrived in January 1945, Buna was evacuated in groups of 3000. For the first time, the brothers were separated. Erwin went with first group; Zoltan went with second group. After a ten-mile march, the prisoners were taken to a barn, and the brothers managed to reunite. They then were loaded into open wagons without food or water except for snow, and after ten days, they arrived in Oranienburg. For one month they stayed in a large hanger, but as British troops approached the camp, the brothers again were evacuated. They went by foot and then by train to Flossenbuerg before being evacuated a third time by freight train. In Scharzenfeld, American planes strafed the train, destroyed the locomotive and maimed a few of the prisoners. After that, the prisoners continued by foot on a death march toward Dachau. Ther German guards shot and killed those that could not keep up. American tanks overtook them, and liberated the prisoners on April 23, 1945. Zoltan had lost his wooden clogs, so an American soldier called him over and made a captured German officer take off his boots and give them to him. The brothers arrived at a camp of liberated Russian prisoners-of-war where they were given food and shelter. There was an American army company nearby, and a Jewish solder, Norman Barish, arranged for the brothers to work for the American army. From Stulon, they went to Schwandorf and from there to a young persons camp in Indersdorf run by U.N.R.R.A. Erwin remained in Indersdorf while Zoltan returned to Romania to see if any relatives had returned and to recover their family's photographs and buried valuables. He discovered it was easier to return to Romania than to leave it again. He was helped by the Bricha, but still was arrested and sent to an Austrian jail for four days. He then spent a month in a DP camp in the British zone of Austria and then a short time in Feldafing. There he learned that Erwin had been transferred in the meanwhile to a children's home in Prien, Germany. Zoltan reunited with him there, and the two brothers immigrated to America on December 1946 on board the Marine Marlin.