Group portrait of members of the Jewish Restitution Successor Organization (JRSO) at a staff conference in Nuremberg, Germany. 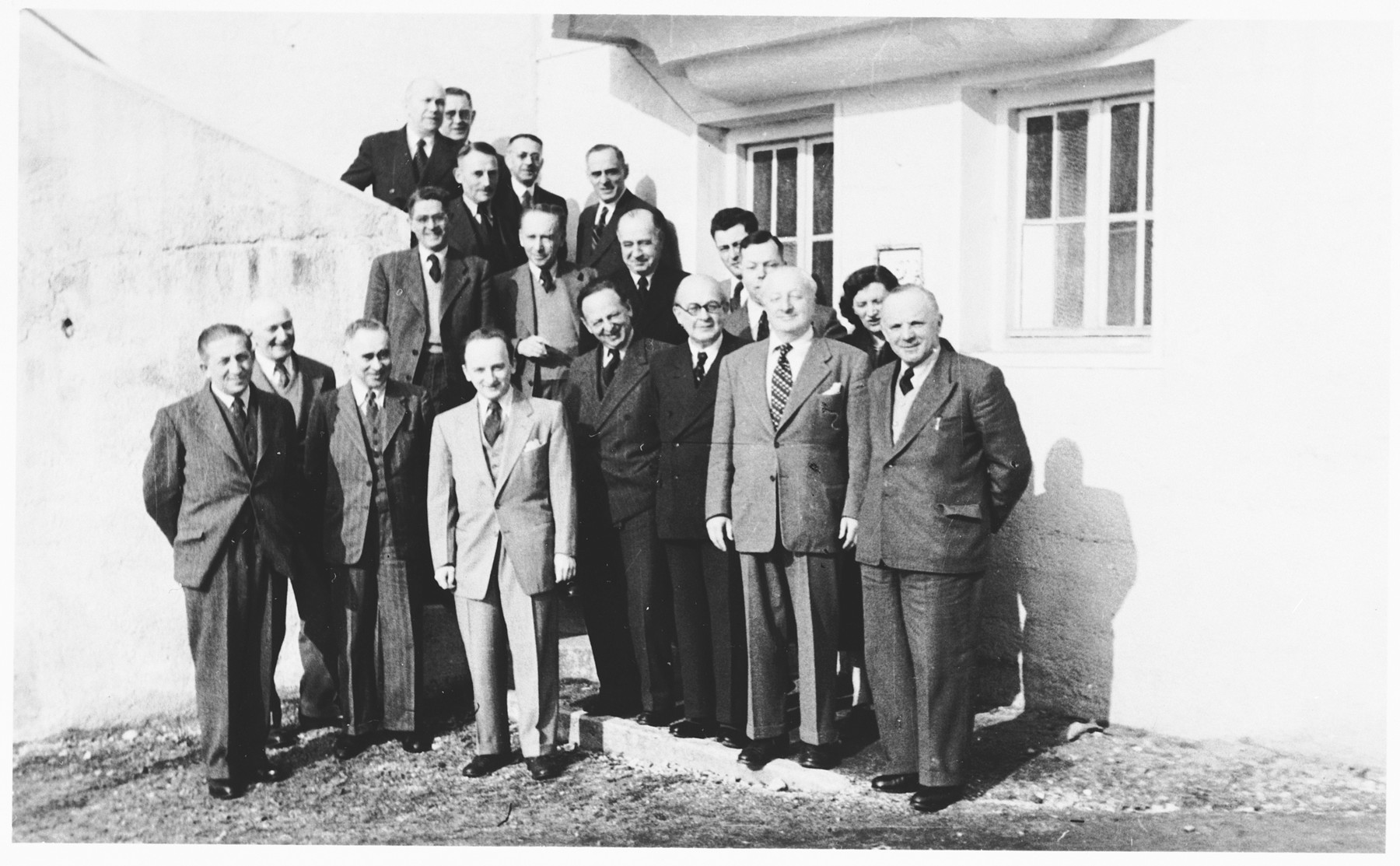 Group portrait of members of the Jewish Restitution Successor Organization (JRSO) at a staff conference in Nuremberg, Germany.

Benjamin Ferencz, the director of the JRSO, stands at the front in the lighter jacket. Also pictured is Dr. Arthur Barczinski (later Arthur Barry), in the second row, third from the left.

Event History
On March 31, 1946, the Jewish Restitution Successor Organization (JRSO) was designated as successor to heirless and unclaimed property belonging to European Jews. In the same year, the organization was incorporated under the New York State membership corporation law. The incorporators were: The American Jewish Committee, the American Jewish Conference, the American Jewish Joint Distribution Committee (JCD), the Board of Deputies of British Jews, the Commission on European Jewish Cultural Reconstruction, the Council for the Protection of the Rights and Interests of Jews from Germany, the Jewish Agency for Palestine, and the World Jewish Congress. Later the following organizations were included: Agudas Israel World Organization, the Anglo-Jewish Association, the Central British Fund, the Conseil Representative Israelite du France, and the Arbeitsgemeinschaft Sueddeutscher Landesverbaende Juedischer Gemeinden. In recognition of the special role of these bodies as the operating agents of the JRSO, and in accordance with an agreement reached at the time of the incorporation of the JSRO, the presidency and the chairmanship of the executive committee annually alternated between a representative of the JDC and a representative of the Jewish Agency for Palestine. Toward the end of 1948 the headquarters of the JRSO was established in Nuremberg. Jewish lawyers, who had been forced to flee from Germany, were recruited from all parts of the world to help search the records for evidence required to retrieve what had been illegally seized. On the basis of such evidence, thousands of claims were negotiated with current German possessors, or adjudicated by German administrative agencies and courts under the watchful eye of an American Appellate Tribunal. These proceedings encountered bitter opposition and hostility. The JSRO was forced to turn the bulk settlements over to the provincial governments as the only feasible means of expediting the recoveries. As the wartime alliance between East and West crumbled, United States policy toward Germany underwent drastic revision. Those who were formerly regarded as enemies were now sought as allies. This reversal brought with it a tendency to minimize the past. German pressure groups demanded the relinquishment of American controls and the abandonment of the restitution policy, but the attacks were successfully repelled. In the US Zone of occupation alone, property worth close to $250,000,000 was restored to former owners, now living in 60 different countries. In addition, heirless assets worth over $25,000,000 were recovered. These proceeds were used to provide shelter for refugees crowding tent camps in Israel, to aid needy Jews still living in Germany, hard-core medical cases, the aged, the blind and the destitute. In addition to the rescue of material treasures, JRSO was involved in the rescue of cultural treasures removed from the synagogues, libraries and museums of Europe. At war's end the US army collected these treasures for return to their rightful owners. Acting in collaboration with the Jewish Cultural Reconstruction, an organization of scholars, the JSRO received over a quarter million Jewish books which were distributed to yeshivot and other centers of Jewish learning throughout the world. Almost a thousand Torah scrolls, and more than 10,000 ritual objects were salvaged. A total of 700 works of Jewish art, which had been seized by the Gestapo, were sent to the museums of Israel.