Haim Solomon poses next to the barbed wire fence surrounding the internment camp in Cyprus. 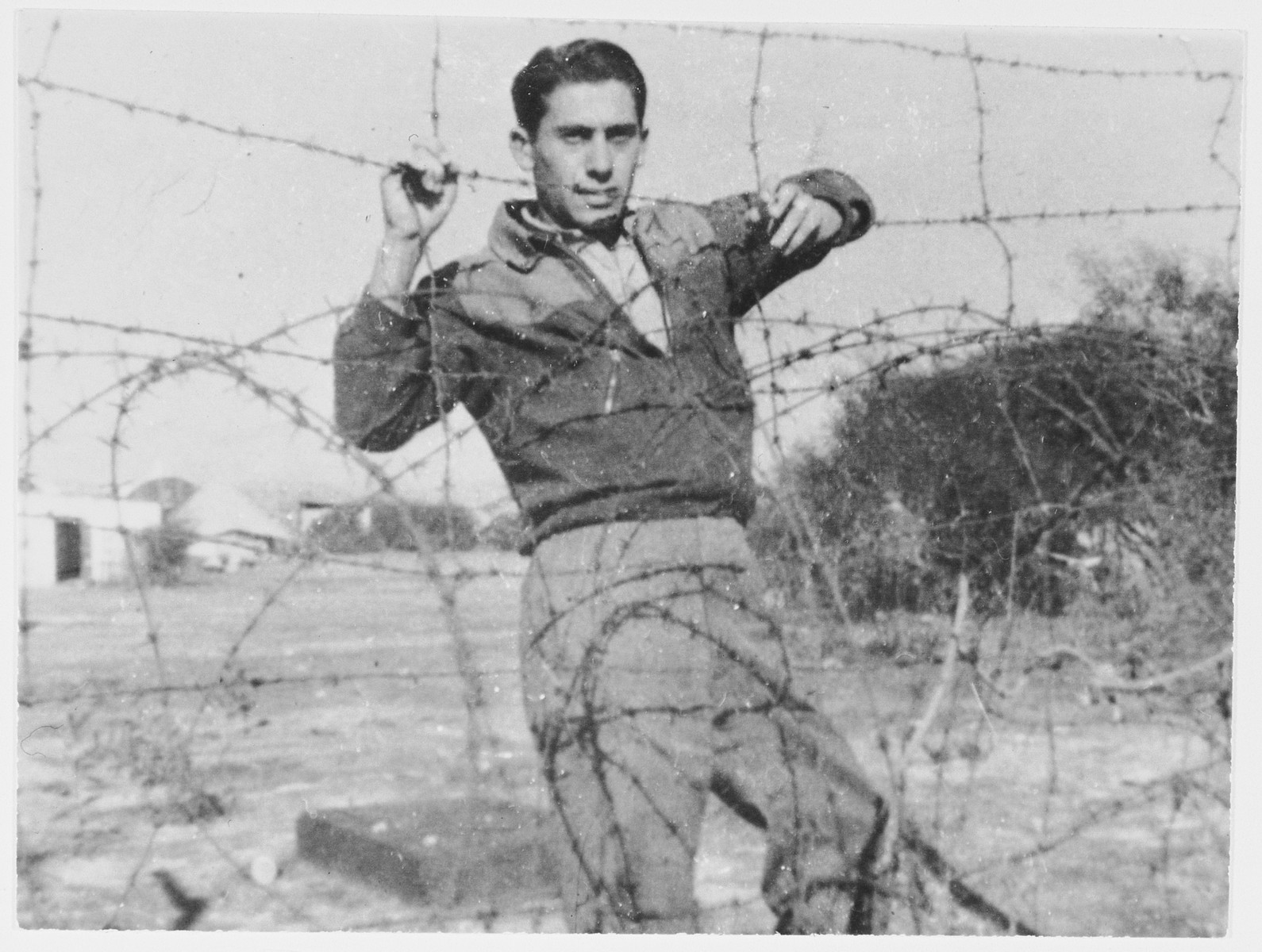 Haim Solomon poses next to the barbed wire fence surrounding the internment camp in Cyprus.

Biography
Haim Solomon is the son of Bercu Solomon and Sofie Halter Solomon. He was born on November 5, 1924 in the Romanian village of Bivolari, near the Besarabian border. Haim had four older siblings: Henry (b. 1915), Hanna (b. 1919), Reuven (b. 1921) and Esther (b. 1923). Bercu owned a dry goods store and was assisted by his older sons. The family was both religious and Zionist. After the Soviets occupied Besarabia in 1939, the Romanian government ordered all the Jews in Bivolari to move further west. The Solomons moved to Iassi where they rented a new apartment and store, and Bercu started a new yard goods business. On June 21, 1941 the Germans passed through Iassi on their way to the Soviet Union, and five days later the Soviet air force bombed the Iassi train station. Using the pretext that Jewish Communists had pointed out the bombing targets, the Romanians instigated a violent pogrom which left thousands of Jews dead. Haim's family was among the few that survived intact. His brothers hid in a shed underneath a large woodpile. Haim and his parents stayed in their apartment and escaped through a rear exit when the mob entered it. After about a week, the situation became calmer, and Haim's brothers returned home. The Romanians then required that each family supply one member for forced labor. Haim, who had studied bookkeeping, volunteered to work as a bookkeeper. For the next year, he worked 12-14 hour days doing bookkeeping in the office of a military hospital, which was formerly the Jewish hospital. Then in March 1942, his work abruptly ended, and Haim never again was required to perform forced labor. From 1942 to 1944 the family lived relatively unmolested, and Bercu continued to operate his store. In March 1944, Soviet troops reached the Romanian border. After hearing rumors of impending street fighting, the family moved to Bucharest in June 1944, which was liberated soon afterwards. Haim's older brother Henry immigrated illegally to Palestine on board the Maritza. After the Soviets took control of Romania, Haim resumed his schooling and his father opened a new store. Haim joined a Zionist group in December 1947, and on December 20 he went to the port of Burgaz to board either the Pan York or Pan Crescent. When they got to Palestine, British troops boarded the ships and took the passengers to Cyprus. There, Haim joined the Hagana and spent his days in paramilitary training, sports, and Hebrew study. He became expert in arranging escapes through the wire fence that surrounded the camp. In December 1948, Haim and a group of other DPS escaped from the Cyprus camp and came to Israel on a fishing boat called Karish. Though Israel already was independent, the British navy still patrolled its shore to block immigration. Haim landed in Netanya and was taken to Bet Lit, an induction center for new recruits. Since he wanted to become a doctor, he was taken to the Tel Hashomer military hospital where he worked for 30 months. The rest of Haim's family immigrated to Palestine in 1949. In November 1952, Haim came to the United States to continue his higher education and studied microbiology at Wayne State University.