Ewa Rosenbach poses with her two sons and a neighbor in front of her home in rural Poland. 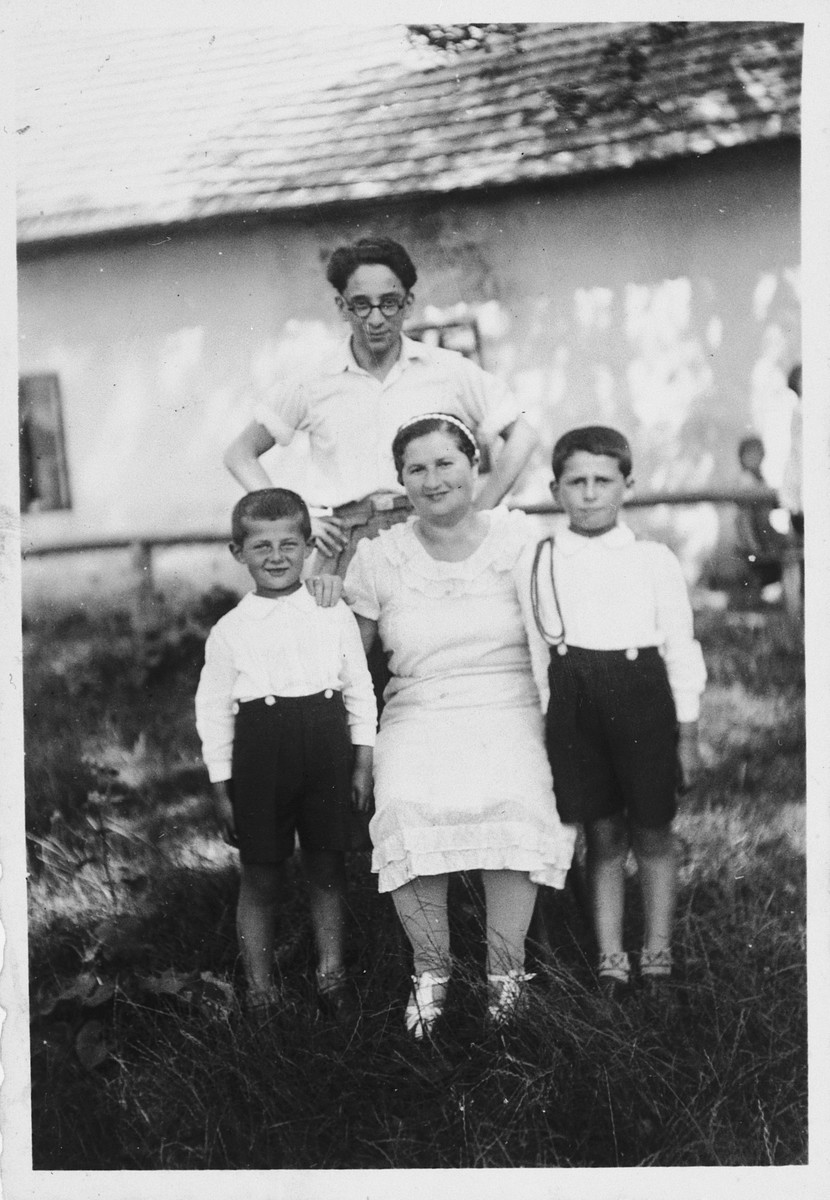 Ewa Rosenbach poses with her two sons and a neighbor in front of her home in rural Poland.

Biography
Larry Rosenbach (born Eliezer Lajziu Rosenbach) is the son of Aaron and Ewa Rosenbach. He was born on April 2, 1929 in Lezajsk, in Galicia Poland where his father was a shipping manager of a lumber company owned by his cousins. Lajziu's brother Asher was born two years earlier in 1927. During Eliezer's childhood, the family moved some four or five times to accommodate his father's business. Though Zionistic, the family was not religious and spoke Polish at home. Aaron belonged to a Hakoach soccer team, and the boys attended the Safa Brura Hebrew School in Tarnow, which was three railroad stops away from their village. After the start of the war in 1939, Lajziu was prohibited from attending school, thereby cutting off his formal education after only four years. In late 1941, Germans conscripted Aaron to help construct a new concentration camp in Belzec. During the construction phase, the camp was still a labor camp and prisoners were allowed limited contact with people outside. Eva came to visit her husband in a horse and cart, dressed as a Polish woman. She brought him new clothes and managed to smuggle him out and bring him back home to Irena where they were currently living. Because of this experience and since Aaron was acquainted with several Polish railroad workers, he knew that any deportation to Belzec meant death, and tried to arrange a hiding place for the family in the forest. While he was working in the forest, the Germans held a deportation action in the town on October 30, 1942. Men over 18 taken would be sent to a labor camp, and everyone else was to be "resettled" in Belzec. Quite physically fit and with their mother's encouragement, both boys managed to pass as able-bodied men despite their young ages. They never saw their mother again. When Aaron returned from the forest and learned that his family had been taken, he lost his will to survive. He was subsequently caught and murdered by the Gestapo. Lajziu and Asher were sent to a concentration camp in Budzyn. The brothers felt doubly isolated. Not only were they without their parents, but since they barely spoke Yiddish, they felt isolated from the other Jewish prisoners. The conditions at Budzyn were unspeakably horrible under the command of the Oberscharfuehrer Feiks. After a year and a half, Lajziu was transferred to a camp in Mielec in mid-1943 . He remained there for the next six months. Here Lajziu's arm was tattooed with a large KL. Lajziu was forced to crawl into a small cramped space to work riveting airplanes. Asher later volunteered to be transferred there as well so that he could stay with his younger brother. As Soviet soldiers approached in autumn 1944, the prisoners were sent to Wieliczka and then taken to Auschwitz. They actually never entered Auschwitz, but remained outside the gates by the railyard where they witnessed the arrival of other transports. From Auschwitz, Lajziu and Asher were sent to Flossenbuerg, and in April, they were sent on a death march towards Dachau. Lajziu was only sixteen when he was liberated by the Americans. During the death march, Lajziu became separated from Asher, but the two reunited a few weeks later. Not knowing where to go, they sought the advice of an American officer in Cham who suggested they go to US army headquarters in Frankfurt. After the brothers arrived there in July 1945, they were given food and shelter in exchange for assorted jobs on the base. Asher remained for a longer time on the base, but Lajziu was anxious to resume his interrupted education. Therefore when a school opened near the Zeilsheim displaced persons camp, he attended classes there. In 1946, Lajziu learned that the British agreed to allow 1,000 orphans immigrate to Palestine. Lajziu joined the transport and along with the other youths, proceeded by train to Marseilles. There he boarded the Champollion and arrived in Palestine in April 1946. Lajziu lived on Kibbutz Ramat Jochanon, served in Gadna, the Palmach, and the regular Israeli army, and fought in the War of Independence. In 1953 he immigrated to the United States where he married Sonia Dzienciolski who had survived the war together with her family with the Bielski partisans.