A Jewish couple take their baby daughter for a walk in the Ansbach displaced persons camp. 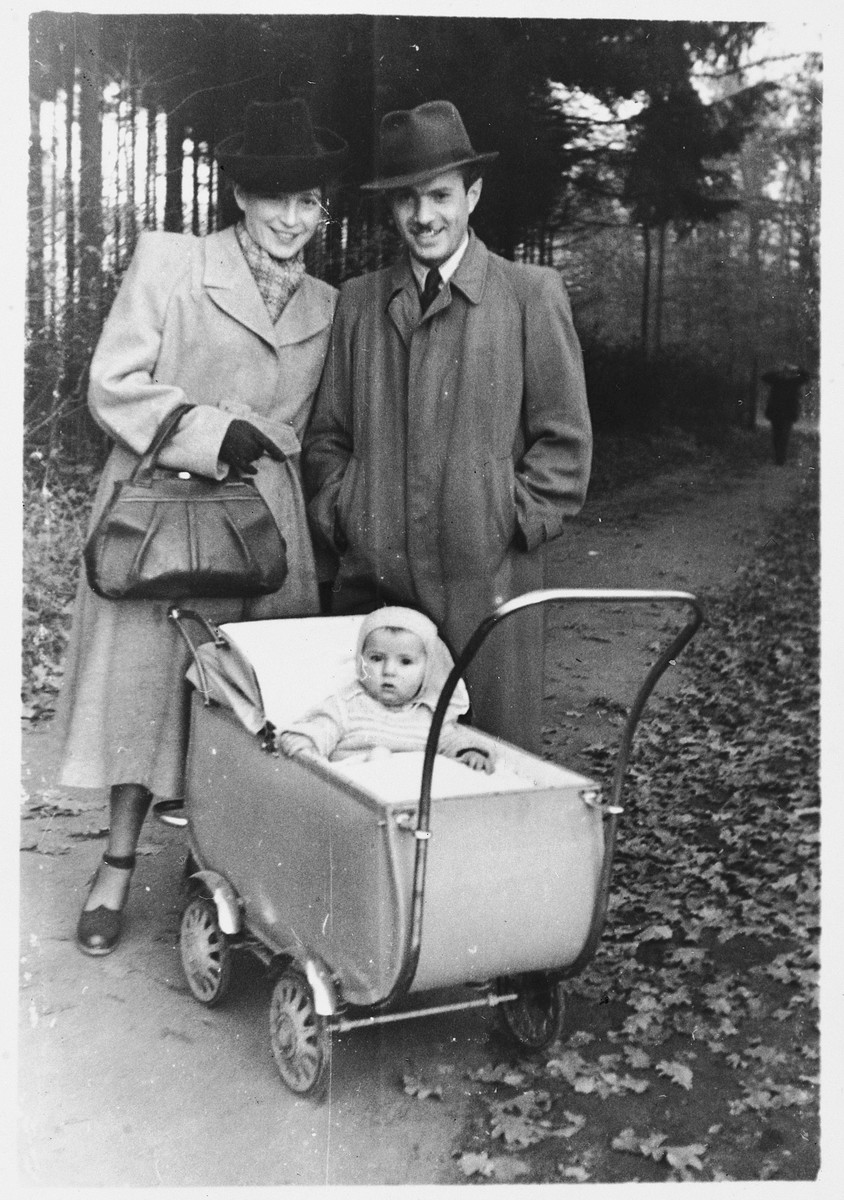 A Jewish couple take their baby daughter for a walk in the Ansbach displaced persons camp.

Pictured are Moniek and Sara Kleinhandler and their daughter, Varda.

Biography
Varda Cohen (born Varda Kleinhandler) is the daughter of Moshe (Moniek) and Sara (Silberberg) Kleinhandler. She was born in 1948 in the Ansbach displaced persons camp. She had an older sibling who died and was buried in Nuremberg one year before she was born. Her younger brother, Chaim, was born in 1957 in Israel. Moshe and Sara married in Chmielnik in 1939.

Moshe (Moniek) Kleinhandler was the son of Chaim and Chaya (Becker) Kleinhandler. He was born in 1917 in Chmielnik, Poland, where his father owned a machine shop that produced machinery for manufacturing candles, bicycle frames and other metal products. He had three brothers and a sister: Avram (Arthur, b. 1913), Leibisz (Leon, b. 1915), Bluma (b. 1919) and Kalman (b. 1921). After the German invasion the Kleinhandlers remained in Chmielnik with her family. They lived in the small open ghetto that was established soon after the entry of German troops into the town. On October 6, 1942 the Germans, together with an auxiliary Ukrainian police unit, unleashed the first of several deportation actions in Chmielnik. On that day, approximately 13,000 Jews were removed from the ghetto by horse-drawn wagons and later transported by train to Treblinka. When the ghetto was liquidated, only about 70 Jews were permitted to remain. Moshe's family (with the exception of Leibisz) numbered among this group. They were probably selected because of the valuable role the Kleinhandlers played in repairing machinery and other items for the Germans. Leibisz and his wife had gone into hiding with a Polish farmer shortly before the October action. Tragically, they were killed the following year by the same farmer, who coveted their possessions. In November 1942 the Kleinhandlers were sent from Chmielnik to the HASAG munitions factory camp in Kielce. During their period in Kielce Moshe's mother was deported to Auschwitz, where she remained until the camp was liberated by the Russians on January 27, 1945. She avoided being sent out of the camp on a forced march a few weeks earlier by hiding beneath a set of steps. Afterwards, she smuggled herself out of the camp and survived the war in hiding working as a maid. Her rescuer later was killed for helping Jews. The Kleinhandlers who remained in Kielce were transferred to the HASAG factory camp in Czestochowa in 1944. When the Germans were forced to retreat in the face of the advancing Soviet army, the factory camp was evacuated in January 1945 and its prisoners sent by train to Germany. Bluma, her sister-in-law Mania (Scheiber) Kleinhandler (the wife of Avram), and the other female prisoners were deposited in Bergen-Belsen, while Chaim, Avram, Moshe and Kalman, were taken with the other male inmates to Buchenwald. From Bergen-Belsen, Bluma and Mania were moved to Bergau and then Tuerkheim. Bluma remained in Tuerkheim until the liberation, while Mania was put on a forced march to Dachau-Allach, where she was liberated on April 25. In Buchenwald, the Kleinhandler men were separated. When Chaim, Avram and Moshe were put on a forced march, Kalman remained behind. He died a short time later. The others were liberated by the Russian army while on the march. After the war the surviving members of the family reunited in Chmielnik. The following year Bluma married Zygmunt Godzinski, a survivor from Kielce, whom she had met at the HASAG munitions factory camp and immigrated to Argentina. Moniek, Sara and his parents came to the Ansbach DP camp before immigrating to Israel in 1949. After their arrival, they first lived in a camp Netanya. They later moved to Tel Aviv where Moshe and his father Chaim opened a machine shop in Jaffa. Avram teamed up with his Josef Kleinert (Mania's uncle) to organize an ORT vocational training school in Chorzow. When he learned a few months later that his wife, Mania, was alive and living at the Feldafing displaced persons camp near Munich, he left Poland to join her. Sara's two brothers perished. Her sister, Chaya, survived and remained in Poland after the war, never admitting she was Jewish.