Studio portrait of Laszlo Kovacs (the cousin of the donor) with a toy car. 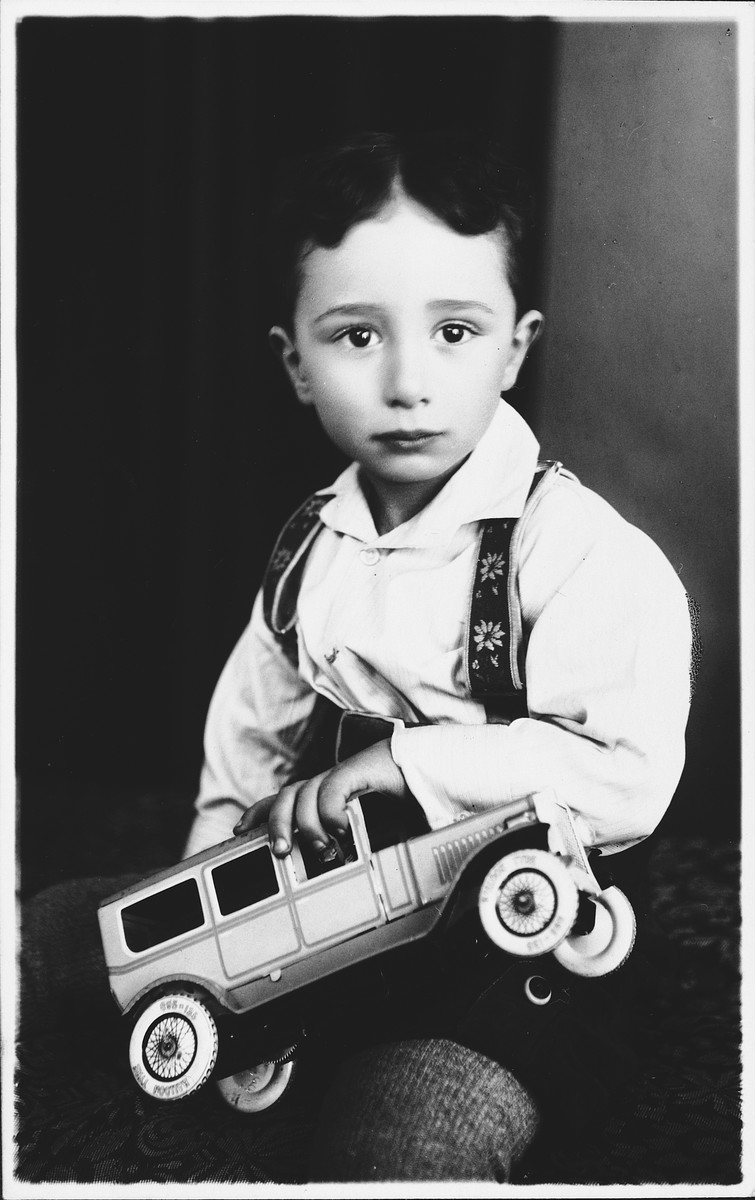 Studio portrait of Laszlo Kovacs (the cousin of the donor) with a toy car.

He later perished in Auschwitz.

Biography
Erika Gold (born Erika Taubner) is only child of Zoltan Taubner (b April 27, 1901) and Jozsa Taubner (nee Kovacs, b. February 24, 1906). Erika was born on August 29, 1932 in Budapest, Hungary where her father owned a store. On March 17, 1944 Nazi Germany occupied Hungary. Her father had to close his retail store and enter a labor camp to work for Hungarian Shell Oil. Gold and her mother hid by day in their Budapest apartment. As a child under twelve, Erika was permitted to receive a ration of two ounces of milk a week. On one occasion she removed her yellow star and went out to buy ice cream in a pastry shop. Life became even more perilous after the fascist leader Ferenc Szalasi became head of state in October 1944. Erika and her mother had to move to a factory where they slept on stacks of uniforms. They received Swiss papers offering them some protection. However, despite having the papers, they were still among the 300 women and children who were rounded up when the Nazis raided the uniform factory on December 1. Most everyone was killed, but Jozsa and Erika successfully jumped from the truck and made their way to the home of their former housekeeper Mrs. Ilonka Takats. She hid them until their liberation in January 1945. After liberation they reunited with Zoltan who had been living inside the ghetto. The family returned to their old home to discover all the windows but one had been blown out from air raids forcing the family to sleep in the bathroom. In 1948 the Taubners went to Cuba while awaiting American papers, and in 1950, they moved to Cleveland to join family. Erika completed her studies receiving a degree in medical technology from Western Reserve University. She married Richard Gold in 1956; they have two children and four grandchildren.

Though Erika and her parents survived most of her mother's family were killed. One uncle died on the Russian front. Another uncle and aunt were taken away and killed in Auschwitz as were her grandfather, aunt and two young cousins.