Postcard sent by Viktor Schiller from the Lodz ghetto to relatives in Czechoslovakia. 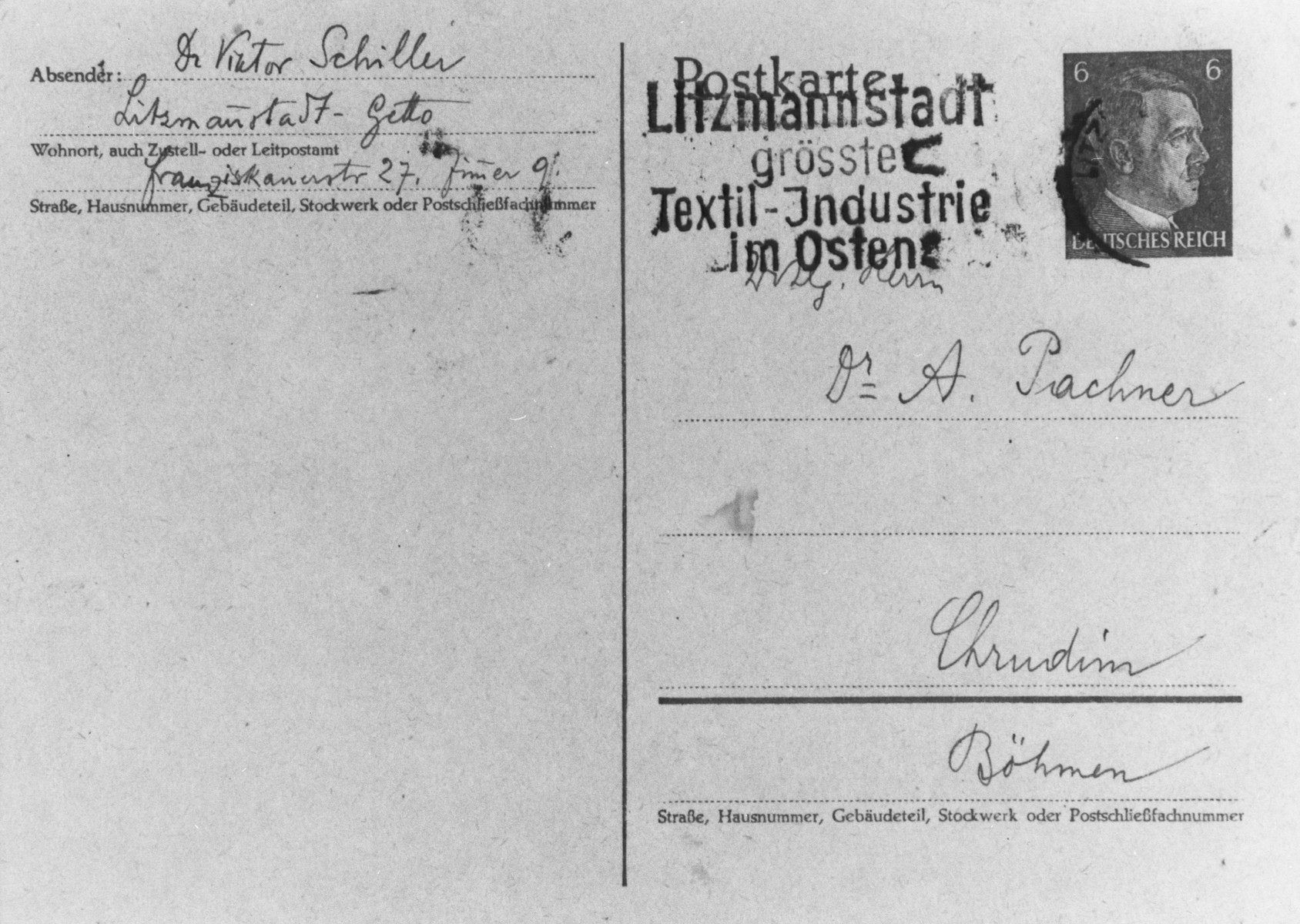 Postcard sent by Viktor Schiller from the Lodz ghetto to relatives in Czechoslovakia.

Biography
Harry Frank Schiller (born Frankisek Schiller) is the son of Viktor and Lili Schiller. He was born on March 13, 1926 in Prague, Czechoslovakia where his father was a prosperous lawyer. His older brother Gustav was born on October 23, 1923. Though the Nazis occupied Prague in March 1939, Frank's father managed to maintain his law practice until 1940. Frank and his brother could have gone on a Kindertransport to England, but Viktor wanted his sons instead to go to France, where they had an uncle. They sent the boys on to France while they awaited their visas. The visas arrived in August 1939, one day before the outbreak of World War II, and by then it was too late to travel. In October 1941 the family received notification to report for deportation. They reported for registration on October 23, 1941. Three days later they boarded a sealed train which brought them to the Lodz ghetto two days later. The family was first housed in a large schoolroom along with forty other people. They then relocated to another room that they shared with sixty other people. The following month, Frank began working in the saddle making workshop. By the start of 1942, conditions deteriorated, and the family began to suffer from disease and malnutrition. They moved to a smaller apartment, which they shared with only two other families, but the sanitary conditions were no better. The entire family contracted dysentary, and Frank's father rejected most food. He passed away on June 1, 1942. Later that summer, Gustav began to work in an electric shop and their mother in a knitting workshop, so the family received greater food rations. In December Lili contracted typhoid and had to be hospitalized. She was later released and returned to work only to again become infected with the disease. On July 3, 1943 she died from tuberculosis. After becoming orphans, the two brothers accepted an invitation to live with another Czech family. Frank began work in the vegetable garden and as a result both boys enjoyed better nutrition. However, by the following year, their situation began to deteriorate again. Then, in March 1944, Frank received a deportation order. He saw his brother for the last time on his 18th birthday, March 1944. He then was forced to leave the ghetto to work for a German munitions factory in Skarzysko Kamienna. Three months later, on June 31, 1944, the factory was evacuated and the prisoners were sent to Czestochowa. Frank remained there until January 5, 1945 when the Germans evacuated some 500 prisoners, including Frank, to Buchenwald. The Red Army liberated those who remained behind. A few days later, Frank was sent to Rottleberode, a subcamp of Dora Mittlebau. At first Frank worked constructing an underground factory, but later he was given an administrative office job since he spoke German. As the Allies approached, the Nazis evacuated the camp in April 1945. The prisoners were placed on a train that was bombed by the Allies. Frank was shot in the arm, and the Russian prisoner sitting next to him was killed. About two weeks later, the American army liberated Frank.