A group of female Jewish survivors pose with Dr. Nisenevitch, a Soviet army physician who befriended them and nursed them back to health. 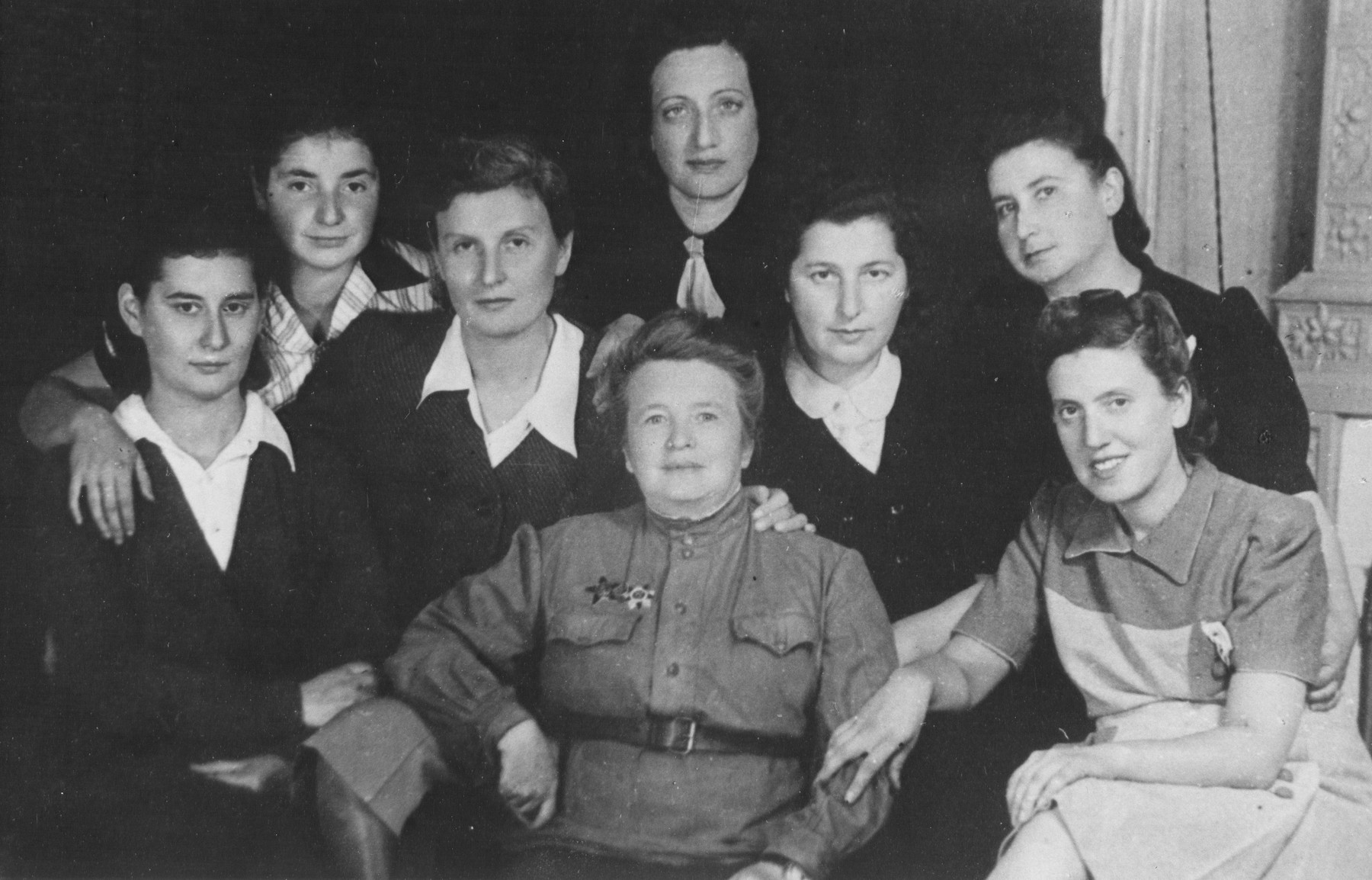 A group of female Jewish survivors pose with Dr. Nisenevitch, a Soviet army physician who befriended them and nursed them back to health.

Biography
Fanya Portnoy (born Fanya Szuster) and her twin sister, Freida, were born in Vilna on December 3, 1914. They had an older sister Ezbetz. On September 6, 1941 Fanya was forced to move into the Vilna ghetto. Ezbetz was later shot to death in Ponary. Fanya remained in the ghetto for two years, and on September 23, 1943, was deported to the Kaiserwald concentration camp outside of Riga. She was put to work preparing fuel shipments. There she met Katia Magid, and the two female prisoners became fast friends who remained together for the rest of the war. In 1944 the women were transferred to Toren, a subcamp of Stutthof. There, Fanya worked in the AIG factory. After their liberation by the Soviet Army, Fanya and Katia escaped to the town of Bydgoszcz, where they were nursed back to health by a Russian doctor named Nisenevitch. Fanya and Katia immigrated to the United States in January 1947 but were only allowed to remain for eight months due to the U.S. immigration quotas. They travelled to Cuba in the hope of receiving proper documents after six weeks, but instead were stranded for over three years. They finally returned to the United States in March 1951. Fanya later married Hersh Portnoy (b. 1909), a fellow Jewish survivor from Odessa, who had survived the war in the Soviet army but lost his wife and children (Matle, Esther and Neche).

Genya Markon (the donor) is the granddaughter of Abram and Genya (Settel) Magid of Vilna. The Magids had two daughters, Raya and Katia. Raya Magid met Alexander Markon, a Jewish émigré living in France, while he was visiting his family in Vilna. When Alexander returned to France, he and Raya carried on a courtship by mail, and the two were married in Paris on February 11, 1937. In 1939, Alexander, who had served in the French army in 1927-1928, was recalled to the military. Following his demobilization in the summer of 1940, he joined Raya, who had fled to Toulouse. While waiting for permission to immigrate to the United States, she gave birth to their first child, Alain, on June 13, 1941. In 1942 their visas arrived and they booked passage to the U.S. aboard the Portuguese liner Carvalho Araujo. The ship left Lisbon in late October, arriving in Baltimore on November 2, 1942. Genya Magid died a natural death in Vilna in 1939. With the German invasion of 1941 Abram and Katia were forced into the Vilna ghetto. Abram was killed that same year during an action in Ponary. Katia survived the concentration camps of Kaiserwald and Stutthof.