Children from Meir Katz's cheder class play with bows and arrows on a Lag B'Omer excursion. 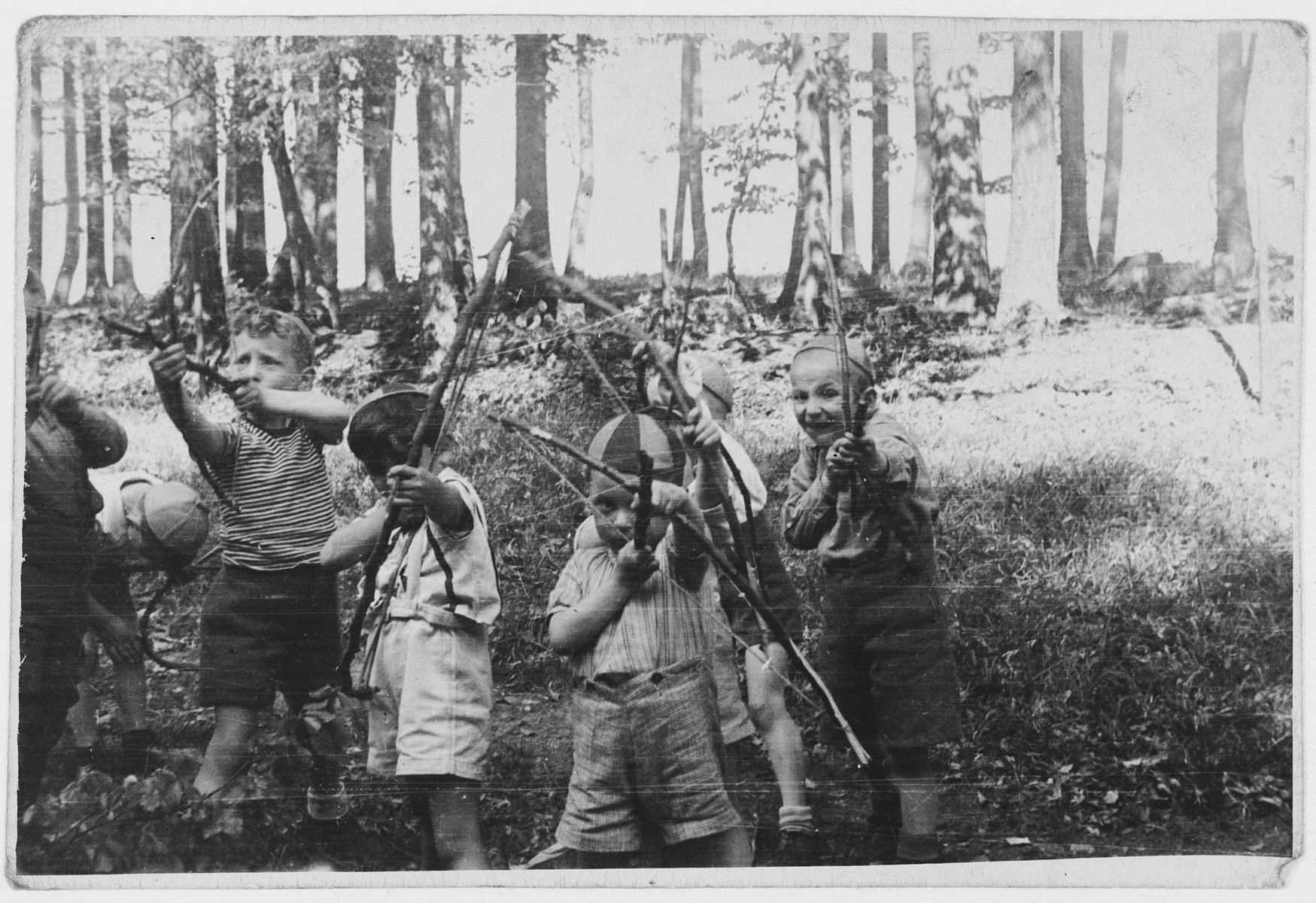 Children from Meir Katz's cheder class play with bows and arrows on a Lag B'Omer excursion.

Biography
Meir Katz is the son of Simon (Shia) and Chana Goldstein Katz. He was born in 1926 in Satoraljaujhely, Hungary near the Czech border. The family were Munkas Chassidim, and his father Shimon owned a bakery. Meir was the second of eight children. He had four brothers and three sisters. Sura (b. 1925), Shlomo (b. 1927) Shifra, Yanky, Yossi (b. 1930), Yisroel David (Dudu) and Pessel Baila. In the early 1940s, the Hungarians conscripted Simon for a forced labor brigade. He was sent to the Ukraine and in early 1944 was about to be liberated by Soviets. Most of his battalion decided to stay in the Soviet Union. However, Simon wanted to return home to be with family. As it turned out, everyone who remained later died from a typhus epidemic. In March 1944 Germany seized control of Hungary and conditions for Jews deteriorated precipitously. Meir, who had been away studying in yeshiva, received a letter from his mother telling him to come home. When he arrived, his father had just returned. The family celebrated its last Passover together. The Germans confiscated all Jewish belongings and then established a ghetto. Since the family's bakery was within the ghetto borders, Simon helped feed all the town's Jews, even though many could no longer afford to buy bread. By late spring, the Germans began deporting Jews from the ghetto to Auschwitz. The Katz family was on the last of four transports, which left in June 1944. Meir was then only eighteen. When they arrived at Auschwitz the men were separated from the women and children. Simon, Meir and Shlomo were sent to right; Yossi (age 14) wanted to follow them, but the German guard hit him and forced him to other side. Once in the barracks, a man from Satoraljaujhely came looking for arrivals from his hometown. When he met Meir and Shlomo, he urged them to volunteer for work in Germany and to try to leave Auschwitz as soon as possible. Meir and Shlomo followed his advice and agreed to a transfer to Rothswaige, a small sub-camp of Dachau. After four or five weeks they were sent to Allach where conditions were much worse. The two brothers stayed together throughout their time in concentration camp, supporting each other and sharing whatever extra rations they could find. Each day, Meir had to walk several miles to work on some railroads. One day he stepped on rusty nail, and his foot became infected. Shlomo snuck into his barracks to help nurse him back to health. Despite his illness, he still went to work. The Todt factory had a doctor for its German employees, though not for the Jewish prisoners. Meir summoned up his courage and knocked on the door of the doctor who treated his wound and cared for the foot until it was healed. Meir later was sent to work in the office of a warehouse manager. This was a very desirable job, but the Polish Kapo in charge wanted Meir to steal for him so he could deal on the black market. When Meir refused, the Kapo hit him, and he lost the job. On another occasion, Meir was beaten severely with truncheon by his block elder after a minor altercation with another Kapo. He could not walk for days afterwards. In spring of 1945 Meir was given work building an animal shelter. As a result, for a short while, Meir enjoyed somewhat better rations, which he shared with his brother. Then the Germans ordered the evacuation of the camp in advance of the Allied army. Under guard, the prisoners set out in the direction of the Tyrol Mountains but they could not go far because of American bombardment. After three or four days on the road, Meir and Shlomo were liberated on either April 29 or 30, 1945. Three weeks later they were brought to Feldafing where they found their father. He had survived imprisonment in Auschwitz until January 1945 and a subsequent death march. The brothers also reunited with their two oldest sisters, Sura and Shifra. Unfortunately they learned that their mother and four younger siblings did not survive. Meir worked in Feldafing as a Hebrew teacher in a Talmud Torah founded by Rabbi Moshe Hoffman. His father, Simon remarried the sister of his first wife, and had two more children, Shaul born in Feldafing and Rivky born after immigrating to America. The family came to the United States in 1949 shortly before Rosh Hashanah. Meir supported himself by working in a women's accessories factory . On December 16, 1950 he married Alice Schwartz, a Holocaust survivor from Kosice. His father lived to age 94.