Polish Jews stand on a street corner of the [possibly Nowy Sacz] ghetto. 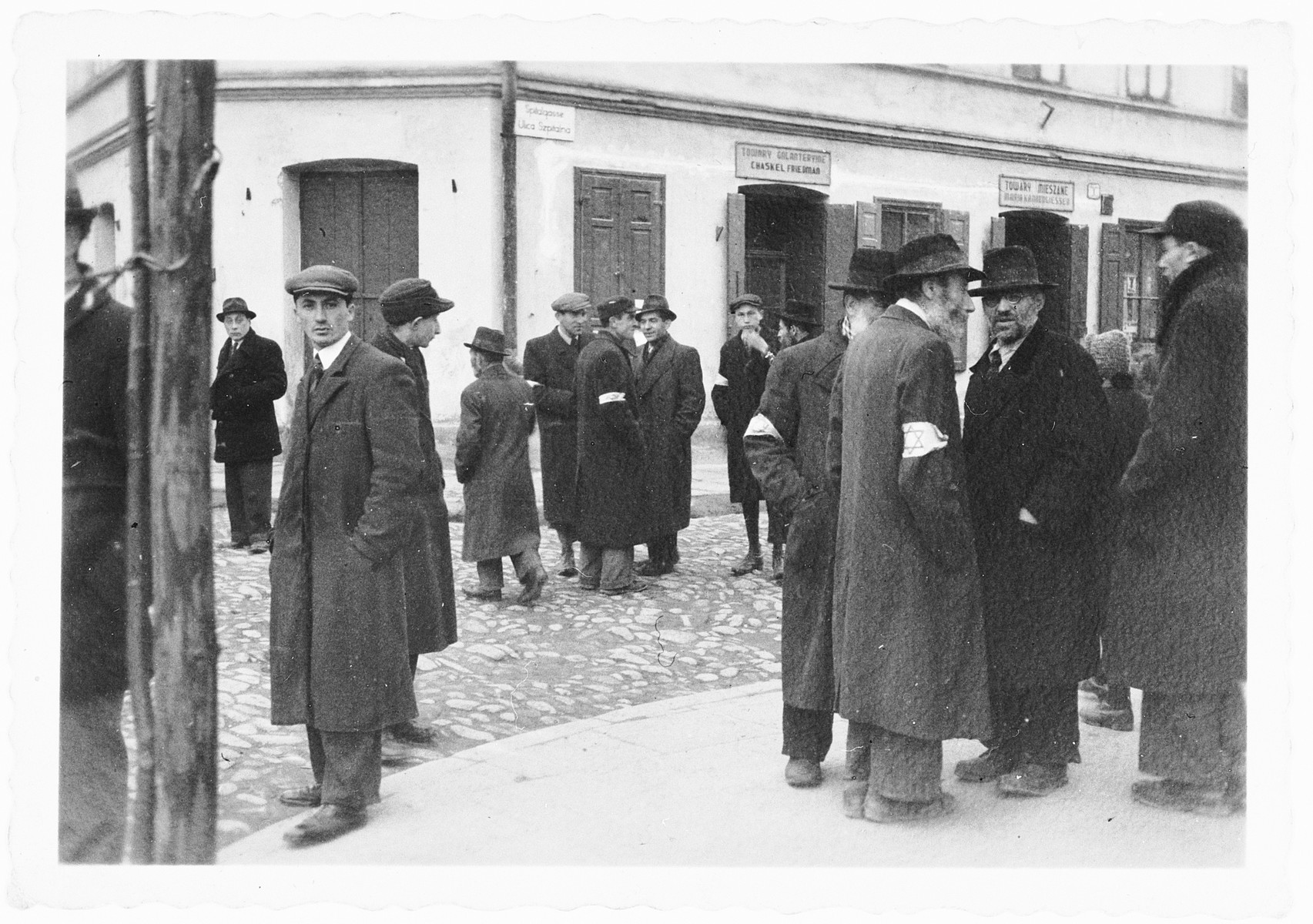 Polish Jews stand on a street corner of the [possibly Nowy Sacz] ghetto.

Event History
In 1939 approximately 10,000 Jews lived in Nowy Sacz. German troops occupied the city on September 5, 1939, and immediately began repressive actions against the Jews. In March 1940 about 700 Jews from Lodz were resettled there, and in August 1941, a formal ghetto was established. Two forced labor camps for Jews were set up near the town: Roznow (spring 1940-December 1942) and Lipie (fall 1942-July 1943), where almost 1,000 Jews perished. In April 1942 several dozen members of the Poale Zion underground were captured and killed in the local Jewish cemetery. Between August 24 and 28, 1942, the ghetto was liquidated and the Jewish population deported to the Belzec killing center.

The Institut fuer deutsche Ostarbeit (Institute for German Work in the East or IdO) was a Nazi research institute established in Krakow during the German occupation whose mission was to gather information and make evaluations about Poland's population and resources and their potential for exploitation. Among its tasks was the research and identification of "racial types" in Poland in order to help devise and implement a plan to restructure Polish society along racial lines. It was believed that such a restructuring would foster "Germanness," eliminate "racial mixing" and otherwise help "secure the military victory and political leadership of the German people" in occupied Poland. Founded in April 1940 by Hans Frank, Governor of the General Government, the IdO quickly grew to include eleven sections, which corresponded to the faculties of a future university to be opened after the war. One of these was the Sektion Rasse und Volkstumsforschung (Section for Racial and Ethnic Research), which itself had three sub-sections: anthropology, ethnology and Jewish studies. IdO staff conducted racial-biological research on Poles, Ukrainians, ethnic Germans, Roma, Jews, and a host of smaller ethnic groups in occupied Poland from 1940 to 1944. Researchers performed numerous physical and psychological examinations on their subjects, collected hair samples and genealogical data and took photographs of individuals, groups and their immediate surroundings. Among the sites selected for racial study by the IdO's Jewish sub-section was the Tarnow ghetto. The Tarnow study was a joint project of the IdO and Dr. Dora Kahlich-Koenner, a racial anthropologist from the Anthropology Institute of the University of Vienna. Kahlich-Koenner, who was at this time involved in a study of full and racially-mixed Jews living in Vienna, sought to examine a large group of Jews from Poland, the ancestral homeland of most Viennese Jews, in order to gather comparative material for her Viennese investigation. The Tarnow racial study was conducted between March 23 and April 2, 1942, only a few months prior to the mass deportation of Jews from the ghetto. It was carried out by Elfriede Fliethmann of the IdO and Dr. Kahlich-Koenner. The research team worked in cooperation with the security police and the SD, which provided room and board for the researchers and instructed the local Jewish council to make ghetto residents available for the study.