A quill created by a Jewish prisoner at the Pithiviers internment camp as a birthday gift for the son of a fellow Jewish inmate then living in Paris. 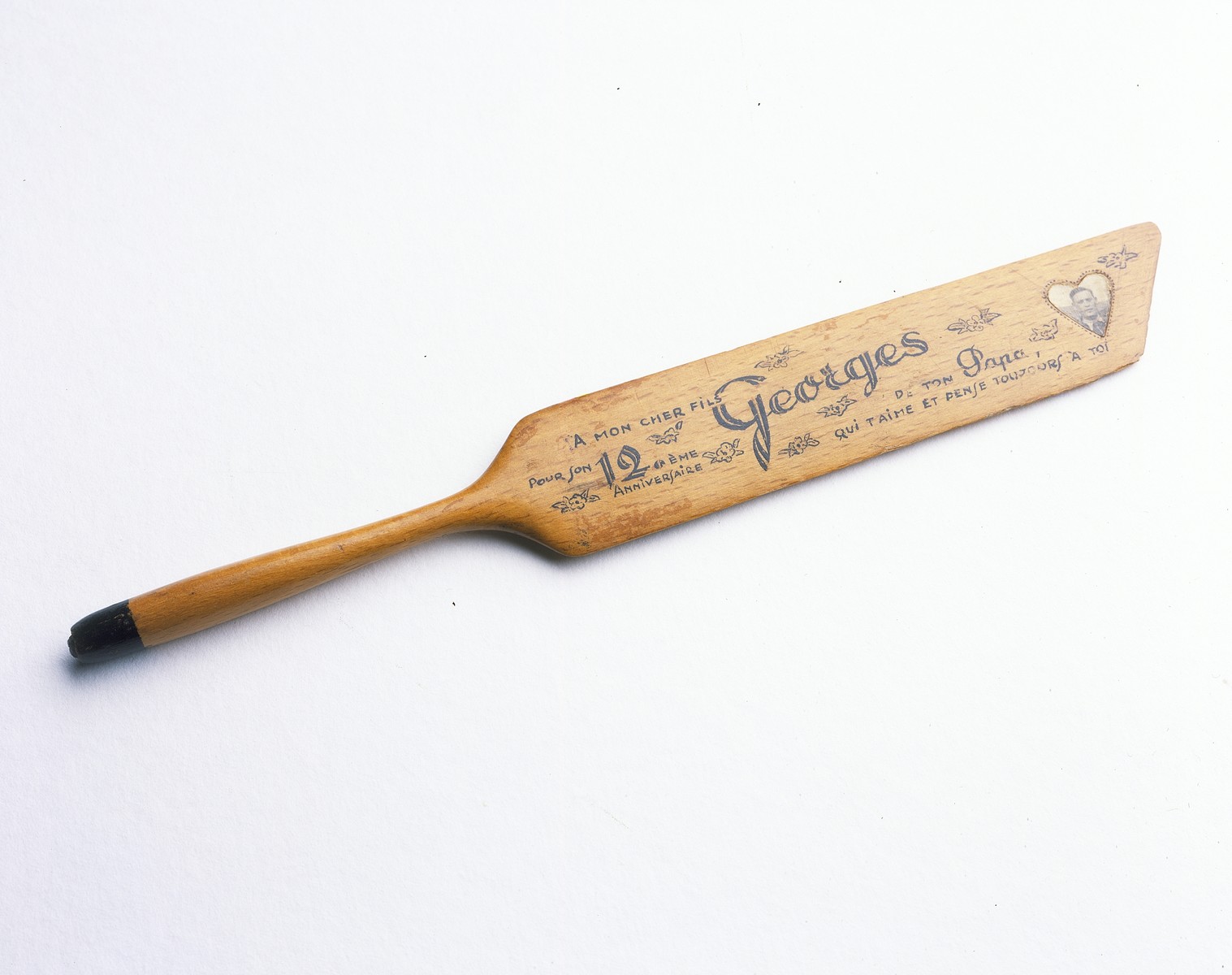 A quill created by a Jewish prisoner at the Pithiviers internment camp as a birthday gift for the son of a fellow Jewish inmate then living in Paris.

The quill was created by Isaac Schoenberg, a Jewish prisoner in the Pithiviers who was subsequently deported in 1942. It was sent by his fellow-inmate, Charles Flaum, to his son Georges Flaum in Paris on the occasion of Georges' 12th birthday. On one side of the quill is an inscription including "Georges" from his papa and a small heart-shaped photograph of Charles Flaum. The other side has a small drawing of the camp and "Souvenir de/PITHIVIERS/1941-42."

Biography
Georges Flaum (now George Banet) is the son of Therese (Tauba Hirszberg) and Charles (Chaim) Flaum. He was born July 18, 1930 in Paris. His father was a tailor, who was born in Rawa, Poland and came to France in December 1923. His mother, who owned a retail store, was born in Czestochowa, Poland and immigrated to France in January 1924. They married on April 5, 1927. Less than a year after the German occupation of France, on May 14, 1941, Charles was called to the police station in Paris as a foreign-born Jew and sent to the Pithiviers internment camp near Orleans. Therese and Georges succeeded in visiting him once during his internment. At that time, Charles presented Georges with an engraved writing quill, an etching and a walking stick as a present for his twelfth birthday. On June 25, 1942, Charles was deported from Pithiviers to Auschwitz on convoy #4. He died on September 1, 1942. Georges remained with his mother until she was arrested on July 16, 1942. At the time of her arrest, Therese and one of the gendarmes yelled to Georges to run away, which he did. Therese was sent to Drancy and then deported to Auschwitz on convoy #12 on July 29, 1942. She also perished. After running away, Georges went to live with his mother's brother and wife, Max and Edme Hirszberg (later Baney), in Paris. Edmee was Christian and helped Georges assume a false Christian identity under the name of his maternal grandmother, Banet. During the next two years Georges was hidden by several families in L'Hay les Roses, Chateauroux, Avranches and in the Evreux region. In the summer of 1944, he returned to his aunt and uncle in Paris. After the war, Albert Banet, a relative from Philadelphia, brought Georges to America. He arrived in the United States on December 22, 1946.