Book 4 of Otto Wolf's diary. This is the first entry by Felicitas Garda (Otto Wolf's sister) dated April 17, 1945. Felicitas continues his diary after his disappearance. 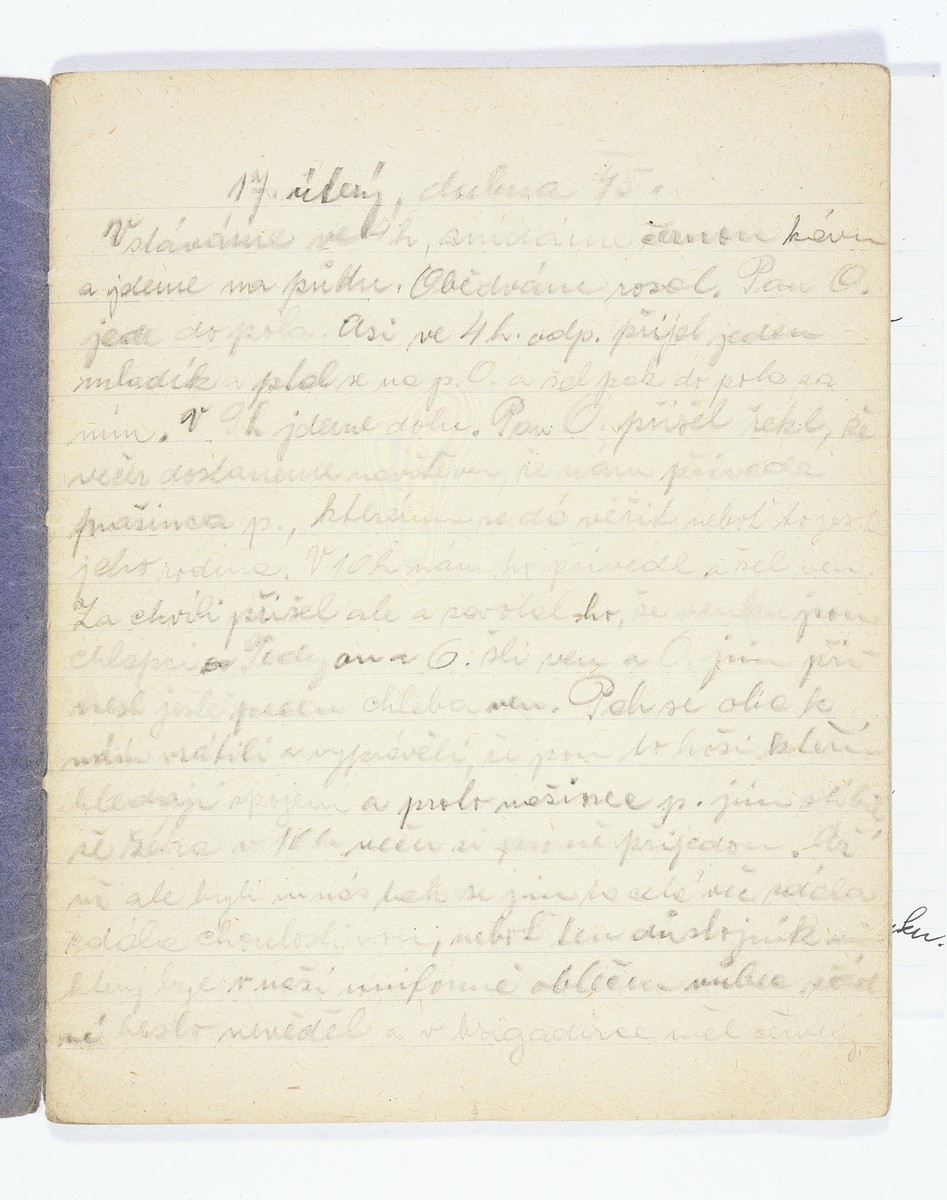 Book 4 of Otto Wolf's diary. This is the first entry by Felicitas Garda (Otto Wolf's sister) dated April 17, 1945. Felicitas continues his diary after his disappearance.

Biography
Otto Wolf (1927-1945) was a Czech Jewish teenager who chronicled his family's experiences living in hiding in rural Moravia during WWII in his diary. Otto was the son of Berthold and Rosalie Wolf. He had one sister, Felicitas (known as Lizi in the diary), and brother, Kurt, who joined the General Svoboda's Czech military unit in January 1942 to fight the Germans. Otto's journal begins on June 22, 1942, the day he, his parents, and sister escaped from an assembly center in Olomouc, Moravia, where they had been brought from their village of Trsice for deportation to Theresienstadt. The family returned to Trsice, where they were sheltered by a gardener named Jaroslav Zdaril (known as Slavek or Sl. in the diary). In October 1942, as winter approached, Zdaril moved the family from their hiding place in the woods near the edge of his field, into a wooden hut in his vegetable garden. It was unsafe for the family to leave the hut, even at night. Zdaril supplied the family with all their daily needs, including food, newspapers, cigarettes and clean laundry, though the dependence was difficult on the Wolfs and on Zdaril. He also facilitated their correspondence with relatives in Prague. In April 1943, the family left the hut and returned to their hiding place in the woods, where Zdaril continued to assist them. Though the villagers (including members of the gendarmerie) were aware that Zdaril was hiding Jews, the Wolfs were never betrayed because antifacist sentiment ran high in the village. In the spring of 1944, with their relationship with Zdaril breaking down, the Wolfs decided to find a new hiding situation. They moved into the attic of Maria Zborilova, their former maid, and were assisted by the Zborils and by Ludmila Ticha, a local dentist. After a year, in March 1945, fearing discovery and the ambivalence of Mr. Zboril to their presence, it became necessary for the Wolfs to find new refuge. With the continued assistance of Dr. Ticha, the family moved into a new hiding place in the home of the Ohera family in the village of Zákrov. On April 18, 1945, a group of Vlasovites (Soviet POWs fighting with the Germans) raided the village to uproot local partisan forces, arresting Otto and 22 other young men. On April 20, Otto and 18 of the young men arrested in the raid were taken into the forest near Kyjanica and shot, their bodies burned. As the family did not know what happened to Otto, Felicitas wrote in his diary, keeping it up to date for his expected return. Berthold, Rosalie, and Felicitas Wolf were liberated and finally able to emerge from hiding on May 8, 1945. After receiving, on the same day, the news of the deaths of both Otto and Kurt, who was killed in battle in March 1943, Rosalie Wolf had a massive stroke from which she never fully recovered. Felicitas married and immigrated to the United States with her husband, Otto Garda, in 1968. She donated Otto's handwritten diaries to the United States Holocaust Memorial Museum in 1995. Otto Wolf's diary has been excerpted in Alexandra Zapruder's book "Salvaged Pages: Young Writers' Diaries of the Holocaust" (2002) and was published in Czech as "Denik Otty Wolfa: 1942-1945" (1997), edited by Ludvik Vaclavek and Jiri Danicek.