Jewish displaced persons in Tuerkheim march in a memorial parade on the anniversary of the liberation of a concentration camp. 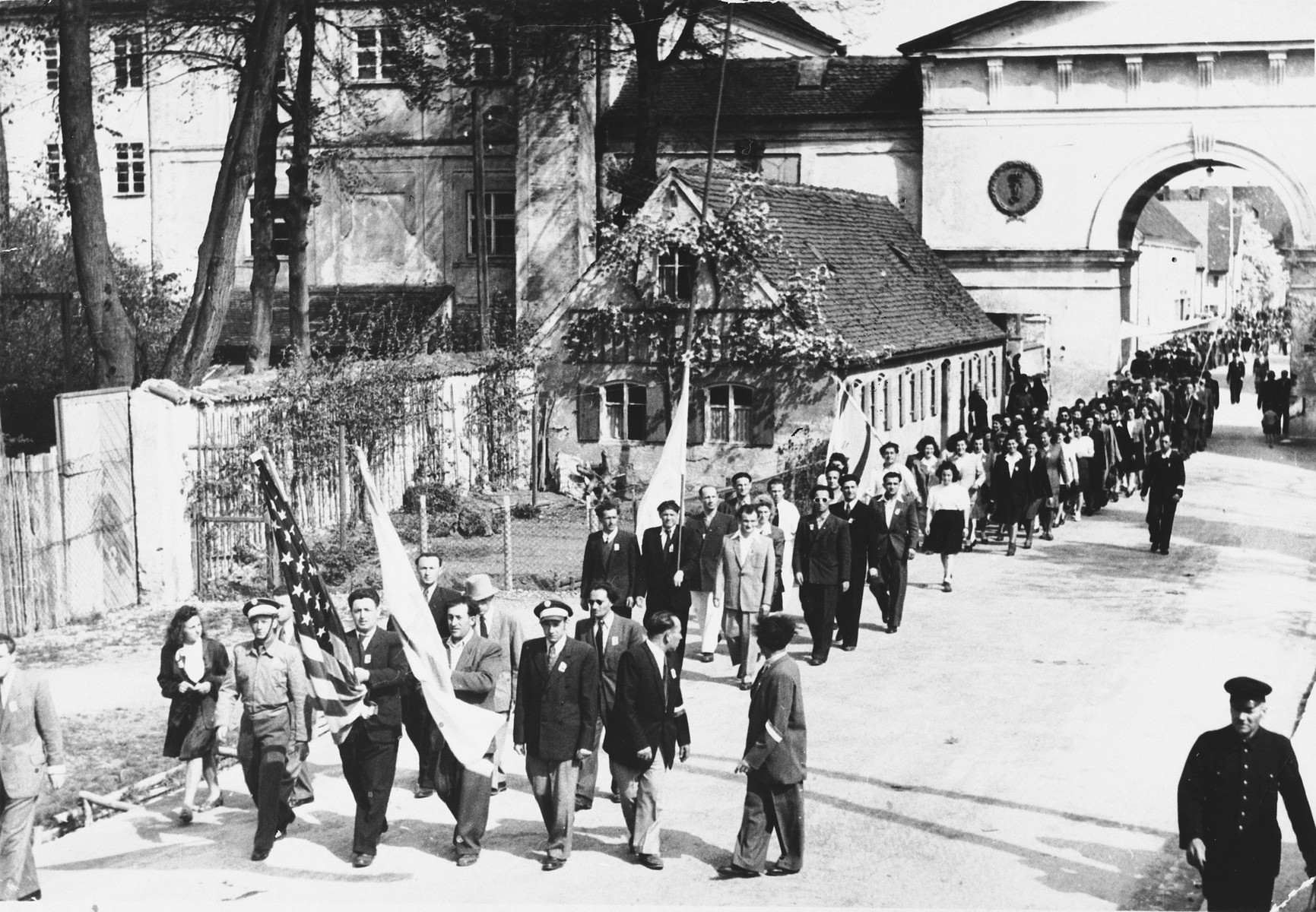 Jewish displaced persons in Tuerkheim march in a memorial parade on the anniversary of the liberation of a concentration camp.

Biography
Walter Kaufman (born Velvel Kaufman) is the son of Majer and Ruchl Pfeffer Kaufman. He was born on January 26, 1923 in Polaniec, Poland where his father was a butcher. Majer and Ruchl Kaufman had five children: Rachel (born 1915), Israel Avrum (born 1920), Velvel (born 1923), and twins Bezalel and Chaje Sure (born 1925). After the German occupation, Majer continued to work as a butcher even though the Germans made the slaughter of animals illegal. In September 1942, a Polish policeman warned the Kaufman family of the imminent deportation of the Polaniec Jews. Rachel, her husband and their two children, together with Chaje Sure went to nearby Nowy Korczyn to move in with her in-laws. Majer, Ruchl and their three boys went to Pacanow hoping they could return after the Aktion. Two days later Avrum and Velvel returned to Polaniec to pick up some warm clothing for the family. They spent the night in the attic of the Lowicki family. In the morning, Mr. Lowicki notified the two brothers that all the Jews form Pacanow, Nowy Korczyn, Stopnice and the surrounding villages were marched to the train station in Szczucin and deported to Belzec. A few days later, Avrum and Velvel spotted their youngest brother, Tzale, who managed to escape from the transport. The three boys went to the nearby forest where they hid intermittently throughout the winter of 1942-1943. They traded all their good clothing, including their winter boots for food. Every now and then the boys went back to Mr. Lowicki who sometimes sold them food. They found a refuge in a barn belonging to the Tarnowski family and hid there without the owner's knowledge. Mr. Lowicki and Drozowski supplied them with food. In May 1943 Mrs. Tarnowski spotted the boys, and they had to flee. During their escape a group of Polish men caught Bezalel and locked him up in a stable. He managed to escape once again and meet his brothers at a meeting place in the Lowicki orchard. The three brothers lived in the wheat fields throughout the summer of 1943 in tents they build tents from river reeds. They met the Schlachter family, a Jewish family with two children. Local members of the AK ambushed the Schlachter and killed all of them except a young man who joined the Kaufman brothers. The four young Jewish men managed to return to Polaniec and hide again in the attic of Mr. Lowicki. After a short while they found an abandoned house in the middle of the fields and made it into their hiding place, but they were constantly pursued. Finally they approached the Majsak family, their father's business acquaintance and asked him for help. Josef Majsak prepared a dugout under a shed. The three brothers hid in the underground hole from November 1943 till August 1944. Mr. Jozef Majsak, his wife and their two older children: Talka and Jurek brought them food and removed the waste. The youngest child, Stasia, and other members of the Majsak family had no knowledge of the brothers' existence underneath their shed. In August 1944 the Soviet Army liberated Polaniec, but during the winter offensive of 1944 the Soviet Army moved away from the village. At this point a few surviving Jews returned to the village and were murdered by the local Poles, members of the AK. Avrum, Velvel and Bezalel left Polaniec and reached Lodz. In the summer of 1945 they illegally crossed the border into Czechoslovakia with the help of false documents purchased in Krakow. They stole across the border finally reached the Landsberg DP camp. After a few months they settled in Turkheim. In February 1949 Velvel traveled to New York on board the SS Marine Tiger, and his brothers joined him a few weeks later. At first they found employment in a Connecticut resort, which belonged to their relative, but after the summer ended they returned to New York. Velvel started worked for a women's clothing manufacturer and attended design school at night. In 1953, he married fellow survivor, Lola Rein.