Marcel Koller poses with three friends from a young pioneers school in Cernauti after his family's return from Transnistria. 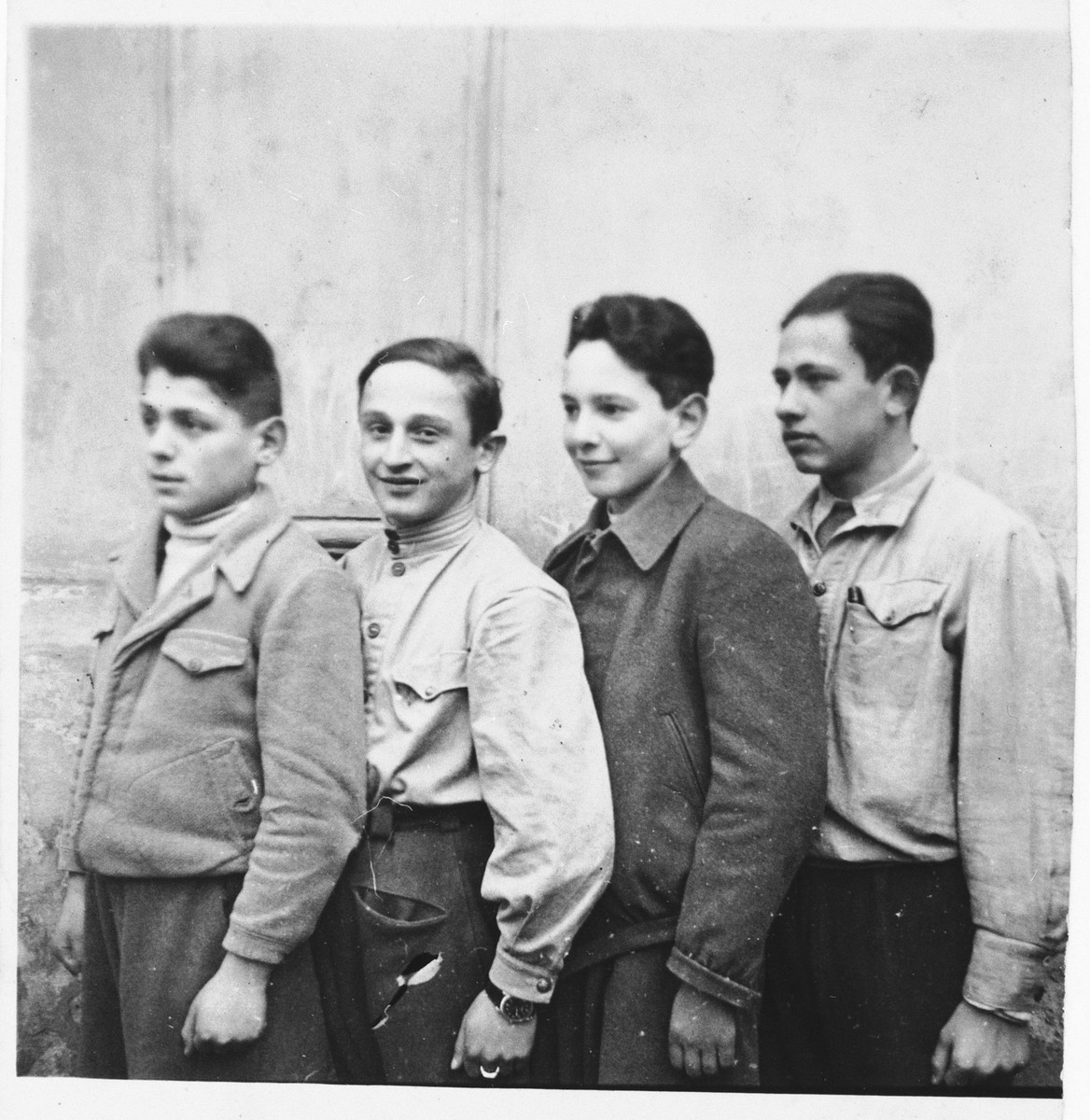 Marcel Koller poses with three friends from a young pioneers school in Cernauti after his family's return from Transnistria.

Marcel Koller is standing second from the right in a dark jacket.

Biography
Mark Koller (born Marcel Mordechai Koller) is the son of Israel (Susiu) and Anna (Haberman) Koller. He was born April 23, 1931 in Vizhnitsa (Bukovina) Romania, where his father was an attorney. Marcel has a brother Dov (Berti, b. 1927). His father, who had received his law degree from the University of Cernauti, served as the chief legal counsel for the Vizhnitser Rebbe, in addition to his other legal work. Marcel's mother hailed from Vienna and was a graduate of a culinary institute. Both parents played chamber music and were involved in a number of charitable and communal organizations. Marcel and his brother attended both Romanian public school and Jewish religious school (heder). After northern Bukovina was ceded to the Soviet Union along with Bessarabia in June 1940, Marcel and Dov began to attend a Russian school that sought to imbue the children with Communist ideology. One year later, in June 1941, Germany invaded the Soviet Union and the Red Army withdrew from Bukovina. Almost immediately Romanian fascists unleashed a pogrom against the Jewish community. The Koller family hid for a week in the local hospital. During their absence their home was ransacked and most of their valuables stolen. In October 1941 the Kollers were herded into a ghetto, along with the rest of the Jewish community of Vizhinitsa, in preparation for their deportation to Transnistria. The Kollers, including Marcel's grandparents, were sent by cattle car to the banks of the Dniester River, where they were transferred to barges and ferried to Mogilev. From there, they were marched thirty miles to the Tropova labor camp. While en route, they were forced to abandon Marcel's grandparents who had collapsed on the road. The family slept on the floor in unheated barracks at the labor camp, where there were no sanitation facilities and little food. Marcel contracted typhoid fever during an epidemic, which swept through the camp, but survived. Conditions improved by mid 1942, and the Jewish prisoners were allowed to leave the confines of the camp. The Kollers bartered some remaining jewelry for shelter in a clay hut. Marcel's mother helped support the family by knitting sweaters, which she sold for food. His father peddled soap, and the boys gleaned potatoes and begged for food from the villagers. In late 1942 the Kollers received a Red Cross telegram from Anna's brother, Morris Haberman, who had immigrated to the U.S. and was living in New Jersey. Anna's parents, Abraham and Rivka Haberman, had joined him there in March 1938, escaping from Vienna just before the annexation. The Kollers responded to the telegram, telling Morris that they were alive but needed help. Some months later, they received a Red Cross food package from him. At about this time Marcel found a job herding cattle. In the pasture he discovered sugar beets and brought them home for his mother to prepare a soup. One day, however, Marcel stepped on a rusty nail, and his foot became severely infected. He had to quit his job, and his foot was saved only through the efforts of a Jewish doctor who numbered among the deportees. By the spring of 1944 the Germans and Romanians were in retreat from the advancing Soviet army, which arrived in Tropova on April 23, 1944, the day of Marcel's bar mitzvah. Soon after, the Kollers left Transnistria and settled in Cernauti (Bessarabia), where Marcel's parents found administrative positions at the Jewish hospital. The Kollers, who had been declared Soviet citizens when the Soviets annexed Bessarabia after the war, were formally repatriated to Romania only in the spring of 1946 during an amnesty. They moved to the port city of Constanta to facilitate their emigration to the U.S. and appealed to Morris to help them. When Morris was unable to secure immigration papers for them, the Kollers began to explore ways to get to Palestine. In 1948, Marcel's brother, Dov, left for Palestine with friends from a Zionist youth movement, one of whom, Raia Ghendler, he later married. In December 1949 Marcel and his parents joined him there. Marcel remained in Israel until 1956, when he went to the U.S. to pursue his studies. There he met and married Gloria Koss and settled in New York.