Supporters of the Zuen children's home watch the girls perform a flag-raising ceremony. 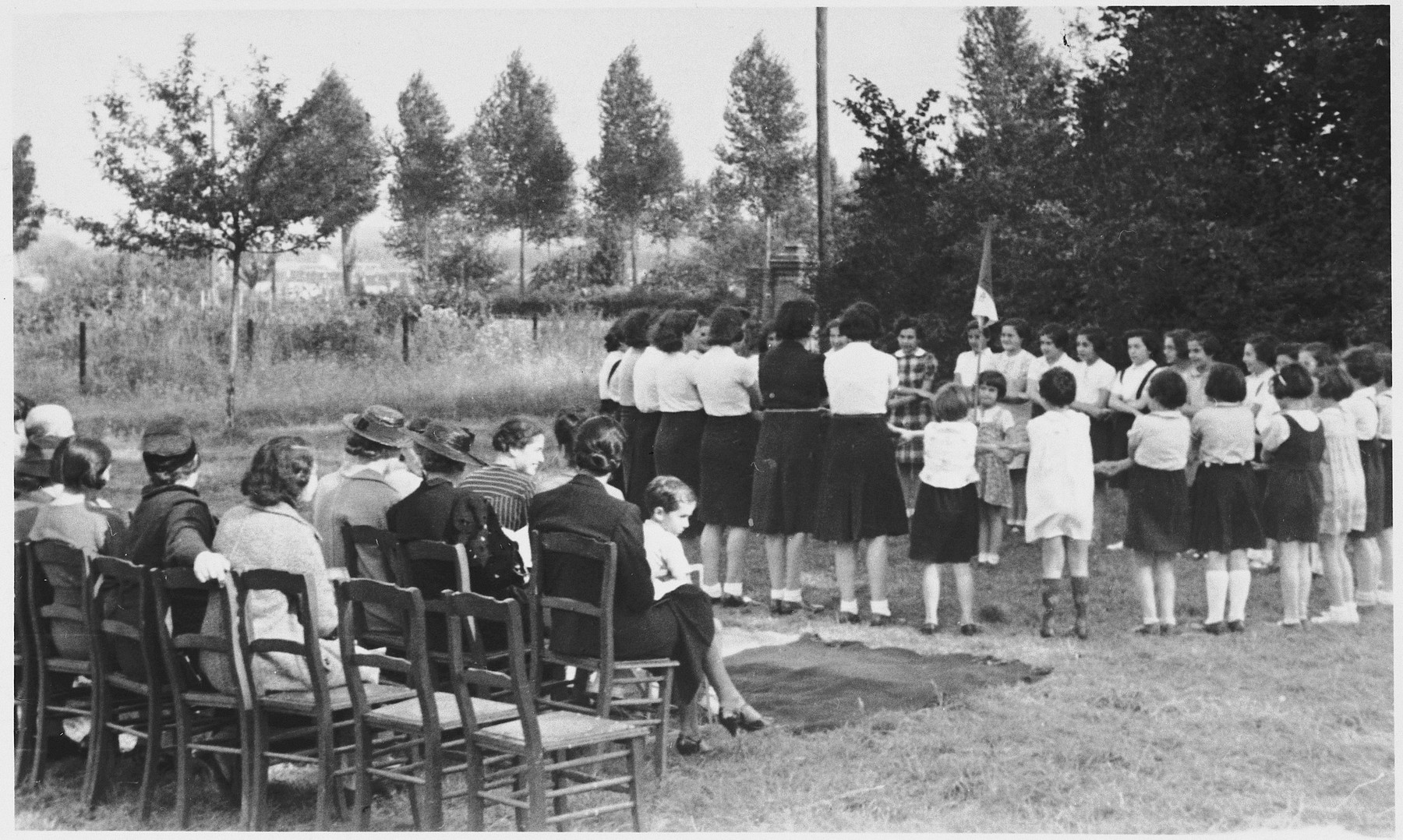 Supporters of the Zuen children's home watch the girls perform a flag-raising ceremony.

Among those seated is the director of the home, Mrs. Elka Frank. Standing near the flag in the plaid dress is Else Rosenblatt (now Stern).

https://encyclopedia.ushmm.org/content/en/article/belgium.
Biography
Walter Reed (born Werner Rindsberg) is the oldest son of Siegfried and Rika Rindsberg. He was born on February 27, 1924 in Mainstockheim, a rural village in Bavaria where his father was a wine merchant. His family had lived in the village for about twenty-five years and his parents were third cousins. Werner had two younger brothers Herbert (b. 1926) and Kurt (b. 1928). Following the Nazi takeover in January 1933, the family faced increasing antisemitism and on the night of Kristallnacht, November 9, 1938 both Werner and his father were arrested. His father was sent to Dachau, and Werner, who was only fourteen years old, was held with other Jewish youth in a nearby town's prison for three nights and then released. After several weeks, Werner's father was also released. In June 1939 Werner's parents decided to send him to safety in Belgium while seeking for ways for the rest of the family to emigrate. Werner was placed in the Speyer children's home in a Brussel's suburb. One year later, in May 10, 1940, Germany invaded Belgium. Werner and the other 99 children fled by train to Seyre in southern France and settled in the barn of large estate. In February 1941, shortly before Werner's seventeenth birthday, he moved with the other older boys to the nearby Chateau de La Hille to make it livable for the younger children. A few months later, Werner received papers from his mother's sister, Sarah Rindsberg, in New York sponsoring his immigration to America. In August 1941, Werner sailed to America from Lisbon, aboard the Mouzinho. He worked as toolmaker and Americanized his name to Walter Reed. In March 1943, Walter was drafted into the American army as a mechanic in the Corps of Engineers. He arrived in England in March 1944, as part of a replacement battalion and was sent to Normandy soon after the initial invasion. After he arrived in Paris, since he was a native German speaker, he was transferred to a military intelligence unit of the 95th Infantry Division responsible for interrogating German POWs. After the armistice, he worked in counter-intelligence helping with denazification. Among his assignments was to identify and remove University of Marburg faculty who had been active Nazi Party Members. He learned the fate of family and discovered they were rounded up and sent to Izbica and from there to either Sobibor or Belzec where they perished. February 1946 he was discharged.