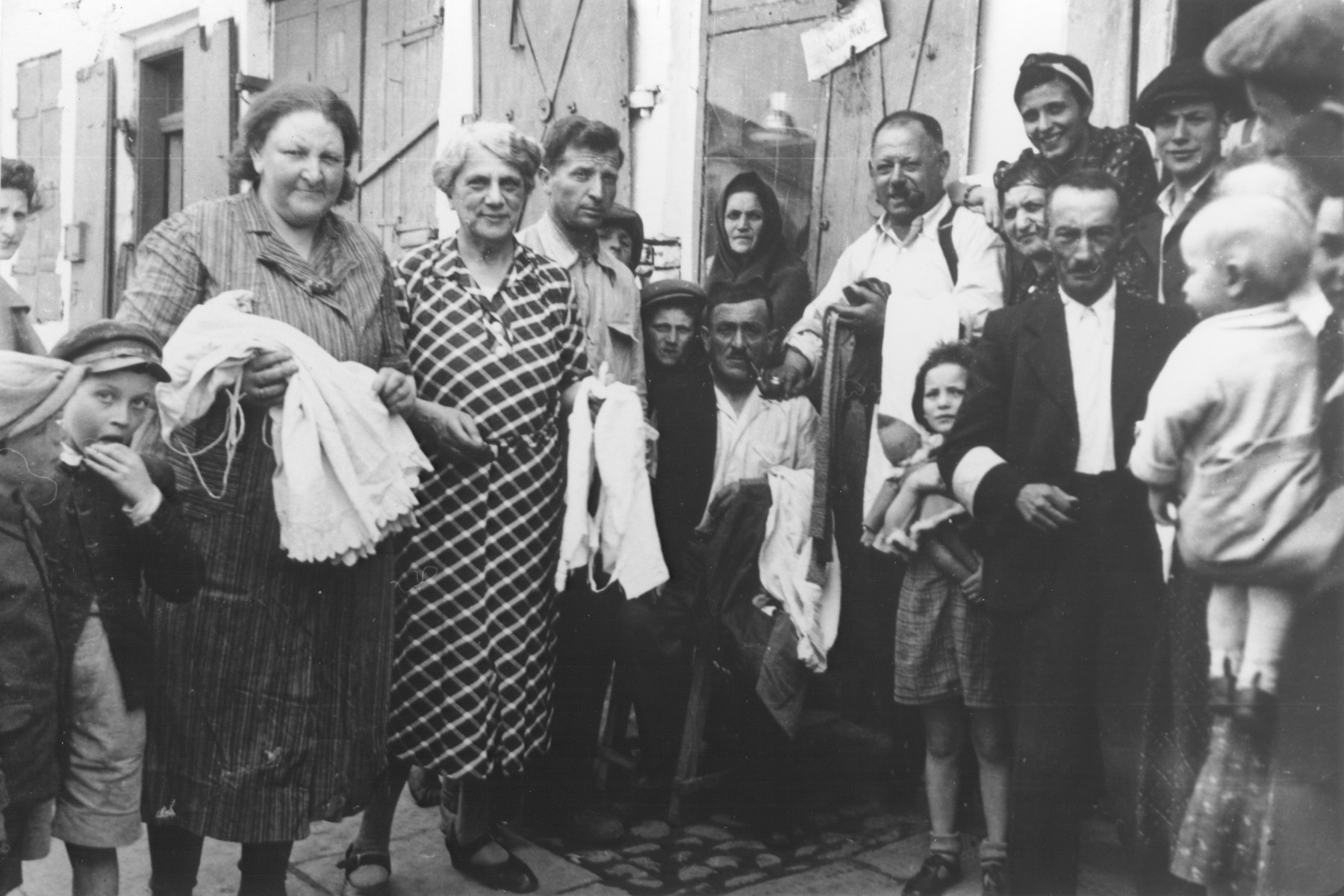 Among those pictured is Wilhelm Schischa (second from the right wearing an armband).

Event History
In September 1939, approximately 4,000 Jews were living in Opole Lubelskie. The population was more than doubled when 2,500 Jews from Pulawy and over 2,000 Jews from Vienna were deported to Opole Lubelskie in December 1939 and February 1941, respectively. In May 1942 an additional few hundred Jews arrived from surrounding towns and from Slovakia. This Jewish community was liquidated in the course of three deportation actions: on March 31, 1942 to Belzec, in May 1942 to Sobibor, and in October 1942, also to Sobibor.
"Opole" in Encyclopedia of Camps and Ghettos, Volume 2 Part A.
Biography
Lilli Schischa Tauber is the daughter of Wilhelm and Johanna (Friedmann) Schischa. She was born in 1927 in Wiener Neustadt, Austria, where her parents owned a clothing store. Lilli had one brother, Eduard (b. 1914). Eduard reached Palestine in October 1938 after being turned back on his first attempt. During Kristallnacht, Lilli's father was arrested and imprisoned for ten days in Vienna. Subsequently, he was forced to sell the family home in Wiener Neustadt. Lilli then came down with scarlet fever and had to be hospitalized. Johanna went with her sister-in-law to Vienna, where Lilli joined them after her release from the hospital. The following summer, on July 13, 1939, Lilli was sent on a Kindertransport to England. Her parents accompanied her to the train station, and during their final moments together, her father placed his hands on her head and blessed her. Upon her arrival in England, Lilli went to live with a group of Jewish refugee girls at the Hackney hostel in London, but soon was transferred to the Cockley Cley estate in Swaffham, Norfolk. Lilli's parents were unable to secure visas and were deported from Vienna to Opole Lubelskie, Poland on February 26, 1941. In this period over 2000 Jews from Vienna were transferred to the Opole ghetto, where they lived in crowded barracks, and where the men were conscripted as forced laborers. In the spring of 1942 the ghetto was liquidated and the Jews were sent to Belzec and Sobibor. Lilli's parents did not survive. During the war Lilli was unaware of her parents' fate. After the liberation she returned to Vienna as a member of the Young Austria Refugees with the hope of helping to build a democratic Austria. There she was reunited with her mother's sister Berta Ohme, who had married a non-Jew before the war and was spared from deportation. Berta handed over to Lilli a collection of documents, correspondence and photos that Johanna had given to her immediately before her deportation to Opole, as well as correspondence sent by Johanna and Wilhelm from Opole.