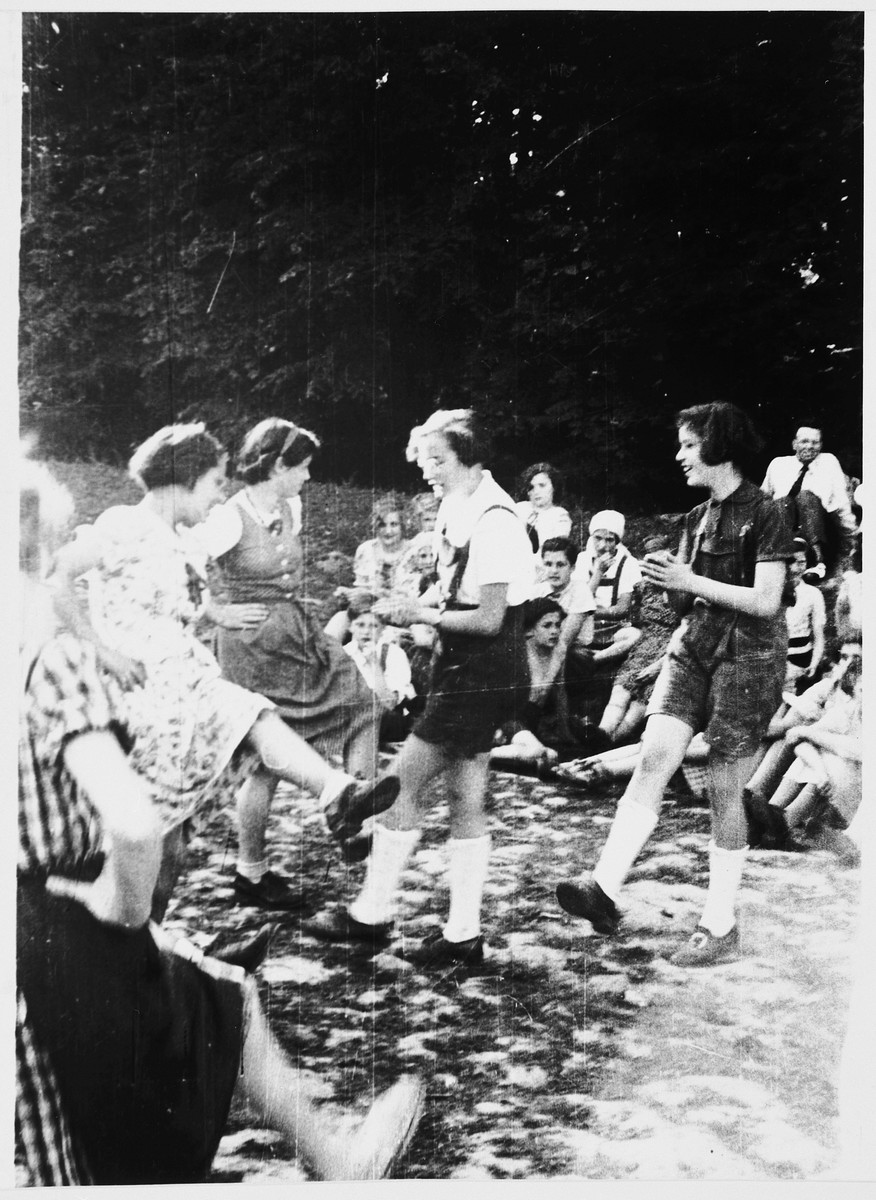 Among those pictured is Erika (Fée) Beyth (center) and Renate Tauber (right).

Biography
Erika Goldfarb (born Erika Felicitas (Fée) Beyth) is the daughter of Walther Beyth and Martha Irma Zischka Lichtenstein. She was born in Berlin in 1924. Her parents divorced when Erika was still a child; she lived with her mother but visited her father regularly. Erika had a brother, Reinhard (b. ca. 1922), who suffered from epilepsy. In 1934 Erika and her mother moved to Denmark, but they had to return to Berlin in the spring of 1935. In November 1938 they tried to escape from Germany but were turned back by the Gestapo at the Belgian border. In February 1939 Martha left for Shanghai, and Erika went on a Kindertransport to France on March 20, 1939. In June 1939 Walther entrusted Reinhard to the Bethel Institution in Bielefeld, feeling he would be safer in a Protestant institution. In the summer of 1940, the Nazi authorities ordered that all Jewish patients in Bethel be deported to an institution in Chalm. They continued to charge Walther monthly fees for Reinhard's upkeep. In reality, Reinhard was gassed near Berlin as early as September 1940 as part of the Nazi euthanasia program. In France, Erika was taken to the Chateau de La Guette, a mansion owned by Edouard and Germaine de Rothschild located near Paris, which served as a home for 130 German Jewish refugee children. The following year, Erika and a few other girls were sent to a school in Saint-Briac, but following the German invasion of France, they rejoined the other children from La Guette in La Bourboule. Erika then was sent to a school in Clermont-Ferrand to learn the hotel trade. After two years of study, she was placed as an apprentice in a hotel in La Bourboule. Soon after, in August 1942, the police came to look for her, but the hotel owner hid her at one of his properties in the mountains, and thus she escaped deportation. Erika then went into hiding as a maid in the home of Rabbi Bloch before receiving false papers under the name Marie-Louise Lebrun. In January 1943, the OSE arranged for Erika to join a group of five teenagers, some of whom had also been in La Guette, who were trying to escape to Switzerland. Shortly after crossing the border, Swiss guards discovered the youths and sent them back to France. After her return, the OSE found Erika a position as a maid in Die under the name, Francoise Buchler. When her employer passed away that autumn, she joined Simone Chaumet, a former teacher at La Guette, who was caring for a group of boys (some of whom were Jewish) in an Amitiés Chretiennes youth hostel in Seyne-les-Alpes, near Digne. In March 1944 Henri Pohoryles (another former teacher at La Guette) recruited Erika to work for the Organization Juive de Combat (OJC) as a liaison officer in the area of Nice, Toulouse and Lyon. Erika was liberated in Lyon and decorated with the Croix de Guerre. However, soon afterwards, French military police arrested her on charges relating to how the OJC had received its funding from Switzerland. They ultimately dropped the charges and released her six weeks later. She spent the next few months recuperating in a sanatorium in Hauteville. In the spring of 1945 she moved to Paris to stay with the OSE teachers Ernest and Lida Jablonski. They found her a position first in the Vesinet children's home and then at Fontenay-aux-Roses. There, she reunited with Eryk Goldfarb, whom she had met during the unsuccessful escape to Switzerland. They married in July 1947 and immigrated to Canada in 1952. After the war Erika learned that her father had committed suicide in Berlin in July 1942.