Three religious Jews converse on a street corner in Mukachevo. 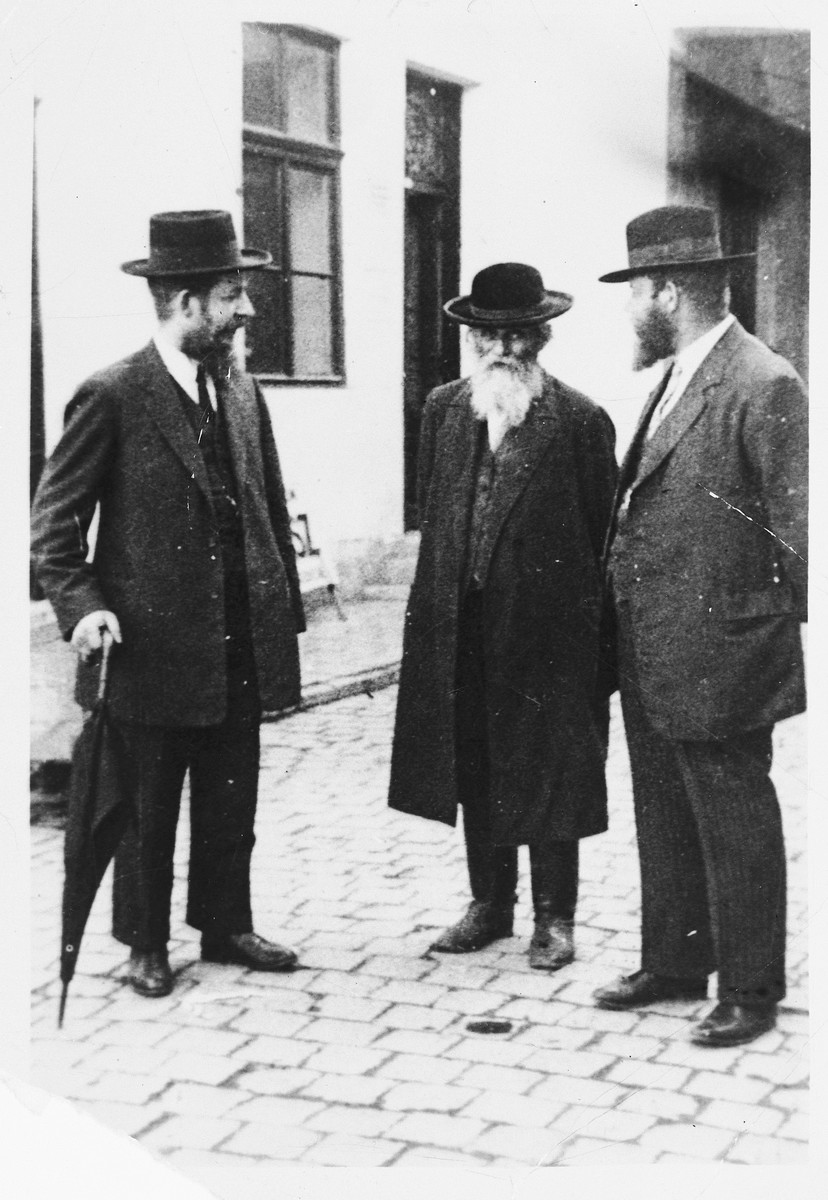 Three religious Jews converse on a street corner in Mukachevo.

Pictured are Chaim Shlomo Grunberger (center) and his sons, Eliahu and Shmuel.

Biography
Ruth Mermelstein (born Rella Grunberger) is the daughter of David Grunberger and Emma (Tema) Berger Grunberger. She was born February 27, 1928 in Mukachevo, Czechoslovakia, where her father was a wholesale grocer. Rella had seven siblings: Asher Ansel (b. 1924), Manci (b. 1925), Nuta Leib (b. 1930), Esther (b. 1932), Baruch (b. 1934), Toba Roiza (b. 1939) and Pesel (b. 1944). The family was religiously observant, and Rella attended the Beit Yaakov religious school for girls, in addition to public school. After the Hungarians occupied Mukachevo in 1938, they confiscated the family business. Between 1940 and 1941 Rella's father was arrested twice and beaten during interrogations at the Koner Castle. In 1942 he was sent for forced labor at the Monopol and forced to shave his beard and sidelocks. In April 1944, shortly after the German occupation of Hungary, the Jews of Mukachevo were forced into a ghetto. Since Rella's house was already within the ghetto borders, the Grunbergers did not have to leave their home, but numerous family members moved in with them. A few weeks later, in May, the Germans moved the Jews from the ghetto to a nearby brick factory. Only Rella, her mother, sisters and younger brother moved to the factory. Her father and older brother did not accompany them. At the brick factory, they were locked in a cellar for three days, during which time Rella's mother was beaten. They were released only after her father turned himself in. He was subsequently interrogated and beaten, as well. The Grunbergers remained in the brick factory until they were deported to Auschwitz on May 24, 1944. Upon their arrival, Rella's mother and younger siblings were sent to the gas chambers. Rella and Manci were sent to the prison camp. Later that day the girls saw their father wearing prison garb. In December 1944 Rella and Manci were put on a three-day forced march through the Sudeten Mountains to the Reichenbach labor camp. For the next two months, they worked there in the Telefunken factory. In February 1945 they were evacuated from Reichenbach in open cattle cars and moved from one camp to another. Eventually in April, they stopped in Hamburg and were put to work building roads. A few weeks later, on May 1, 1945, they were again loaded in cattle cars and taken to the Danish border. The following day their guards left them, and they were liberated by the Swedish Red Cross. Red Cross workers fed them, gave them new clothing and brought them to meet the Danish prince. They were then sent to Sweden. Rella and Manci spent the next three months in a health facility in Halsingborg. After they recovered their heath, they were sent to school in Bredarydin. In the spring of 1946 they immigrated to the United States. Arriving in New York on April 8, 1946, they were greeted by their mother's brother, Herman Berger, and cousin, Willie Braun. On February 1, 1948 Rella married Ernest (Erno) Mermelstein. Aside from Manci, no other members of Rella's family survived the war.