Reichsfuehrer-SS Heinrich Himmler accepts the well wishes of SS police officers on the occasion of his birthday at SS headquarters in the Hegewald bei Zhitomir compound. 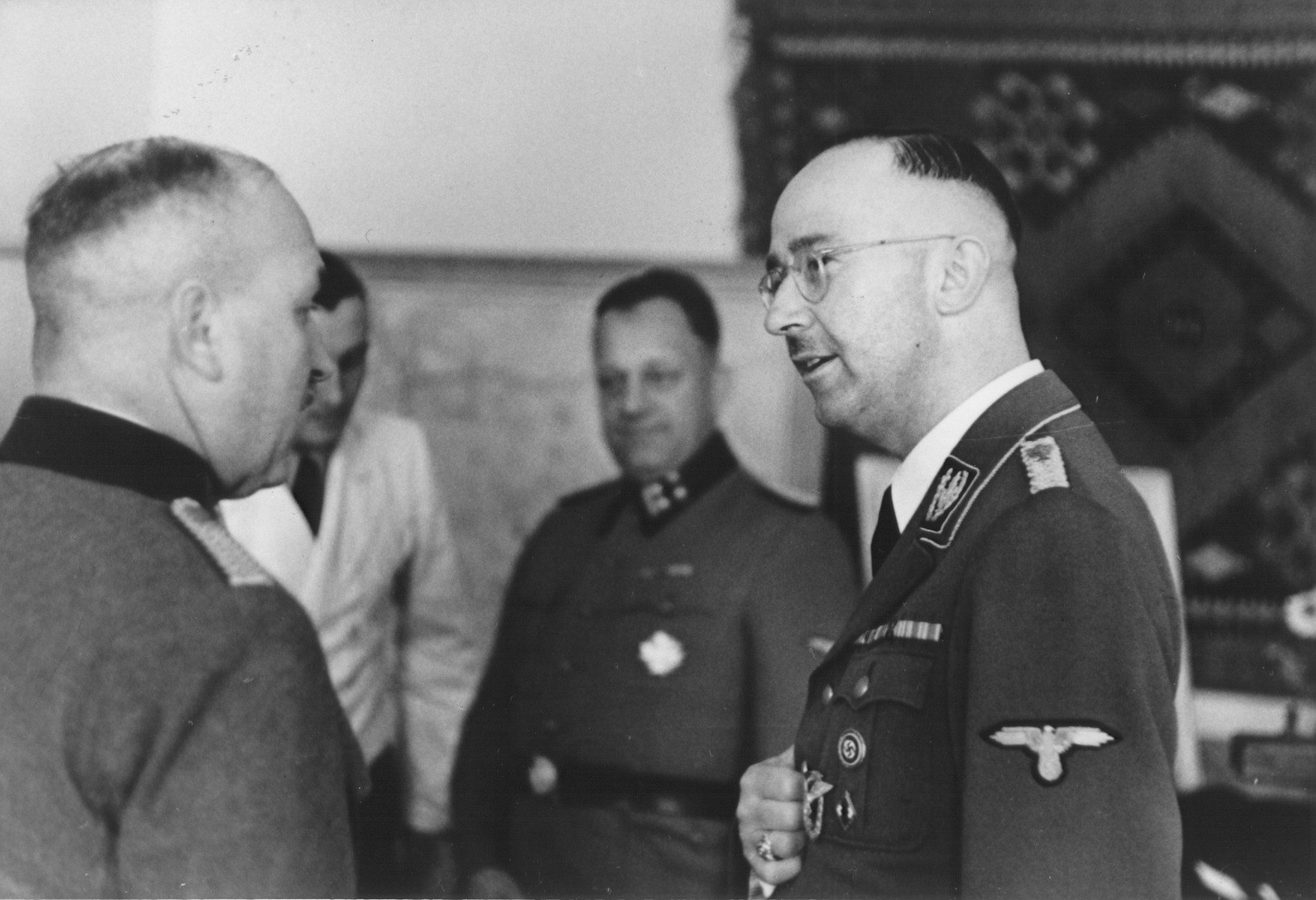 Reichsfuehrer-SS Heinrich Himmler accepts the well wishes of SS police officers on the occasion of his birthday at SS headquarters in the Hegewald bei Zhitomir compound.

The man speaking with Himmler is a member of the Ordnungspolizei. Pictured in the center SS Obersturmbannfuehrer Josef Tiefenbacher.

[Sources: Razesberger. Franz (former Zhitomir SIPO SD chief). testimony, 18 July 1961 before the Landesgericht Wien (Vienna) 20, Nr. 5774/60, NV 21/61, 155-58 (available in USHMM archives).]
Biography
Joseph (Sepp) Dietrich (1892-1966) commanded the Sixth SS Panzer Army during World War II. Born into a Bavarian peasant family on May 28, 1892 in Hawangen, Dietrich spent his early years working in hotels and public houses. He joined the police after service in World War I as a paymaster sergeant. He even spent a stint with the Oberland Freikorps. In 1923, Dietrich joined the SA. He joined the NSDAP in 1928 and by 1930 he was a Reichstag representative for Lower Bavaria. Soon afterwards he was made an SS-Brigadefuehrer. Dietrich was responsible for setting up the Leibstandarte Adolf Hitler (LAH), the Berlin SS guard staff charged with protecting Hitler. He was promoted to SS-Obergruppenfuehrer for his participation in executions of high SA officers in Munich during "cleansing" actions. The LAH joined with units of the Waffen-SS to form a combat unit. On July 4, 1934 he was made General of the Waffen-SS and assigned to the Prussian State Council. Hitler looked highly upon Dietrich for his ruthlessness, military valor, and punishing character. He served as commanding general of the First SS Panzerkorps serving in Poland, France, Greece, Russia, Austria, and Hungary. He was awarded the Diamond Knight's Cross with Oak Leaves and Swords on December 31, 1941 and the Brillianten to Oak Leaves in 1944, but Dietrich proved to be a mediocre military strategist at best. While serving as Commander of the Sixth SS Panzer Army he shared responsibility for the Malmedy massacre of almost a hundred US prisoners of war during the Ardennes Offensive. He was also held responsible for atrocities in the Kharkov-Kherson district in 1941-43 while acting as a divisional commander. In May of 1945, the American Seventh Army captured Dietrich. Because of questions of procedure raised by his defense, his life sentence was reduced to twenty-five years. He was secretly pardoned on October 22, 1955, but he was soon sentenced to eighteen months for his role in the murder of Ernst Roehm. He was released in February of 1959 due to health concerns and died of a heart attack in 1966 while in Ludwigsburg.