Portrait of U.S. combat photographer Arnold E. Samuelson seated in a dining hall with a bowl of soup. 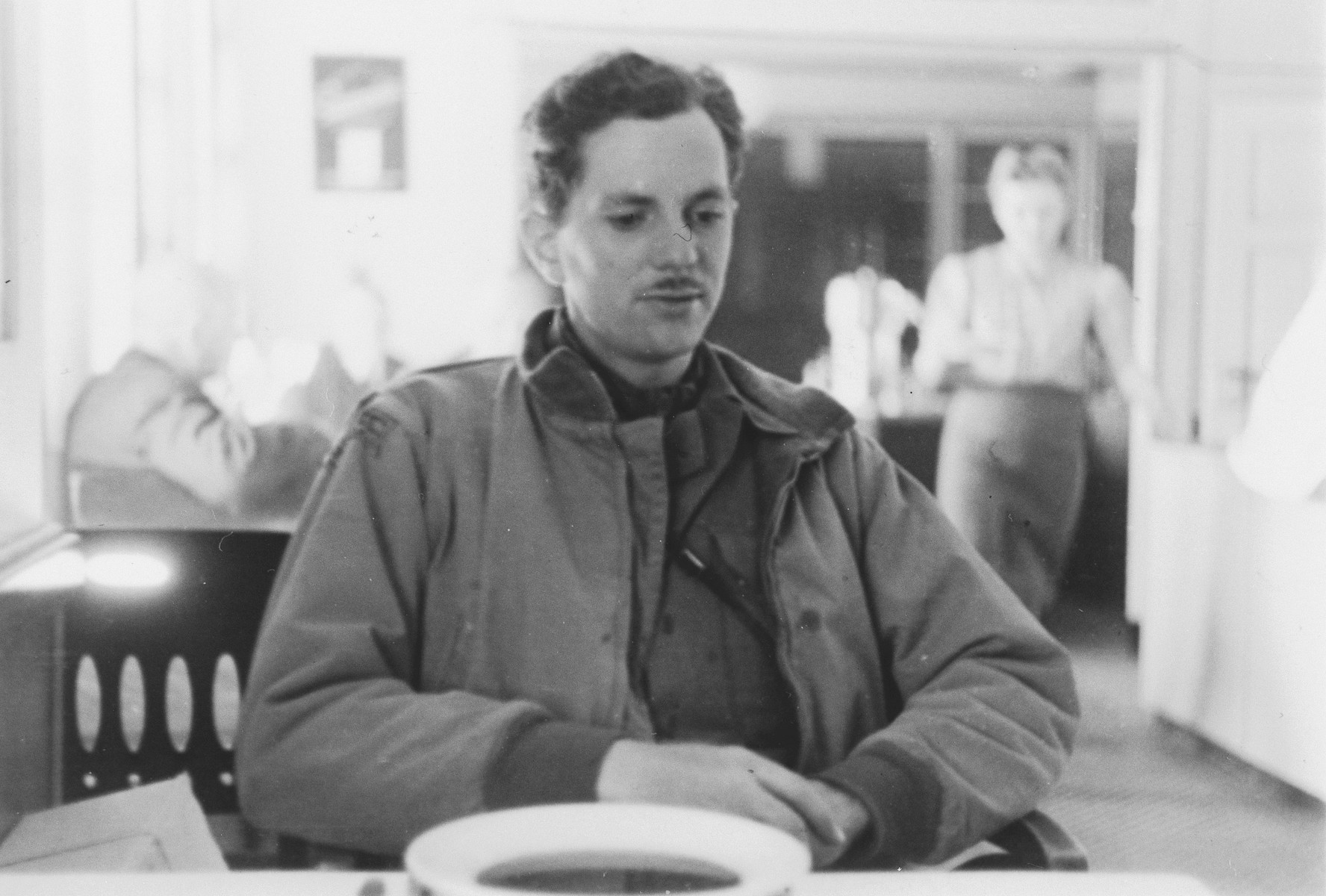 Portrait of U.S. combat photographer Arnold E. Samuelson seated in a dining hall with a bowl of soup.

Arnold Samuelson (1917-2002), was a U.S. Army Signal Corps photographer during World War II, who commanded a unit of photographers who took pictures of the advance of American troops through France, Belgium, Germany, and Austria, including the liberation of concentration and POW camps. The son of Swedish immigrants to the U.S., Samuelson was raised in Tacoma, Washington. He learned photography as a child, and after graduating from high school, went to work in a photo studio. Subsequently, he went to work for the Eastman Kodak Company in Portland, Oregon, where he sold camera equipment. In March 1942 Samuelson applied to flight cadet school and in May of that year was inducted into the U.S. Army. He served in the Army Air Corps before going for training as a Signal Corps photographer in January 1943. Samuelson graduated from both photographic training and officers' candidate school in July of that year, and the following month was assigned to the 167th Signal Corps company. For the next ten months he was stationed in Camp Crowder, Missouri. On July 24, 1944, the 167th Signal Corps company departed for England, where it was assigned to the 12th U.S. Army Group. Samuelson was sent to France in September. Starting in Normandy, his unit moved through Belgium and in and out of Germany. After participating in the Battle of the Bulge, Samuel was sent to the 12th Army Group headquarters in Paris. Following three weeks of desk duty he was reassigned to the 9th Armored Division. His unit was among the first U.S. troops to cross the Rhine River (at Remagen). They continued south through Germany and on May 1 crossed into Austria, where they photographed Hitler's hometown of Branau. His unit then proceeded on to Linz. On May 8, the day after V-E Day, Samuelson's unit entered the newly liberated Ebensee concentration camp and photographed its survivors. The photographers could hardly believe the state to which these men had been reduced. Samuelson expected to be transferred to the Pacific theater, but was saved from that fate by a general who owed him a favor. He then returned to Paris for a few weeks before departing for the U.S. on June 20. He served another six months at Camp Polk, Louisiana, and then was discharged. After his return to civilian life, Samuelson rarely talked about his experience as a combat photographer and seldom opened the military trunks containing his World War II photographs and memorabilia. However, 25 years into his retirement in Texas he decided to return to Europe and see if anything remained of the Ebensee camp. With the assistance of a historian at a Salzburg research institute who he discovered through the internet, Samuelson learned of the existence of the KZ Ebensee Memorial and was introduced to its director during his visit in the summer of 1996. The following winter, Time magazine featured one of Samuelson's Ebensee photos on the cover of its February 24, 1997 issue. He was pleasantly surprised that the magazine credited him as the photographer. Soon after, he received a call from Ebensee survivor, George Havas, who had recognized fellow survivors in Samuelson's photograph. Havas, a volunteer at the U.S. Holocaust Memorial Museum, had learned of the photographer's whereabouts from the director of the Ebensee Memorial. In May 1997 Samuelson returned to Austria when he was invited to be an honored guest at the dedication of the permanent exhibition at the Ebensee Memorial. For his 80th birthday on November 21, 1997, Samuelson's three daughters took him to Washington, D.C., where he met with Havas in person for the first time.