Jewish children eat a meal in the dining room of the children's home in Aische-en-Refail. 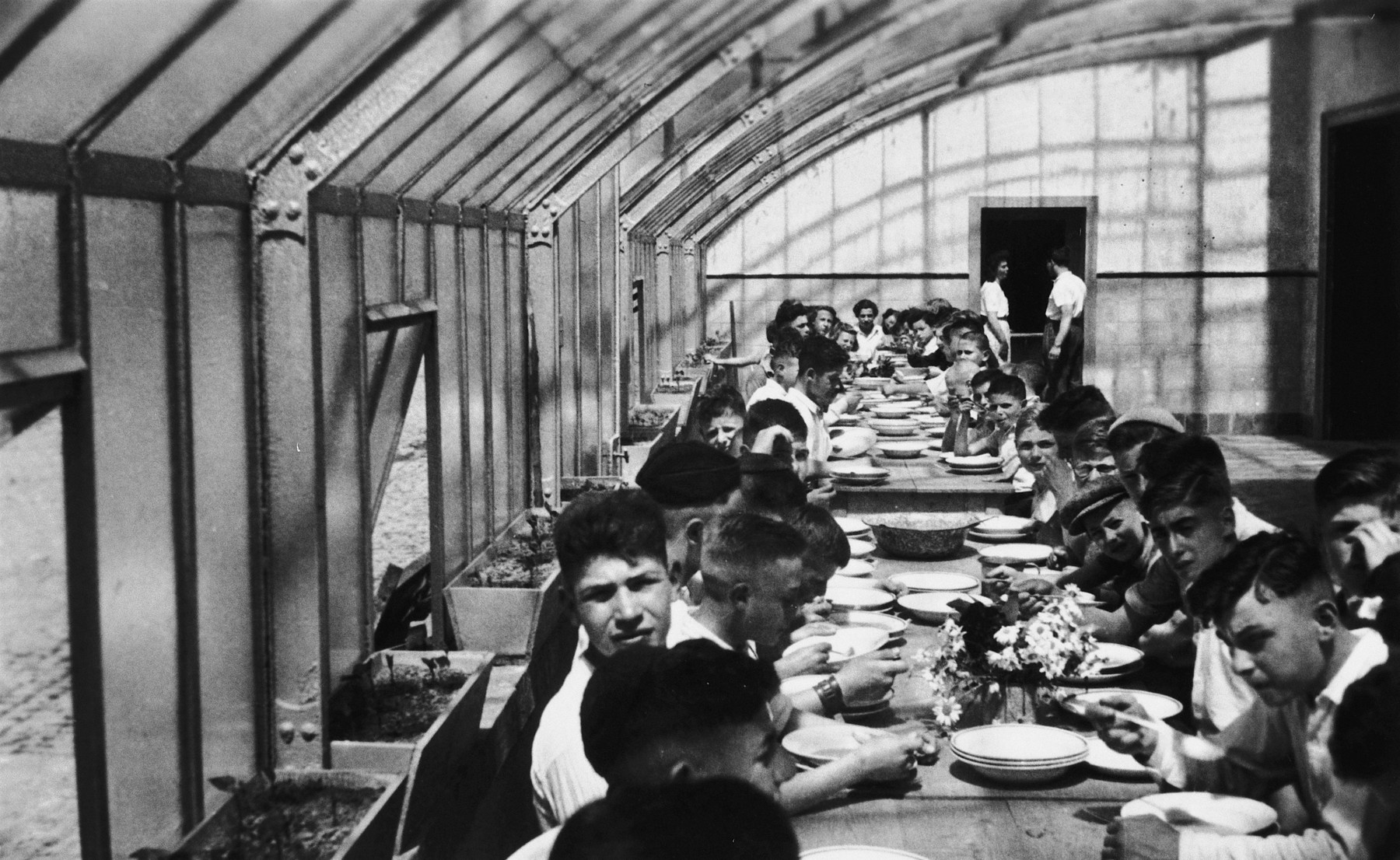 Jewish children eat a meal in the dining room of the children's home in Aische-en-Refail.

Hirsch Grunstein is fourth from the right in a cap.

Biography
Hirsch Grunstein is the son of Benzion and Henia Grunstein. He was born on May 26, 1928 in Kolbuszowa, Poland. When he was two years old, his family moved to Antwerp, where his father worked in the diamond industry. Hirsch's younger brother Salomon was born in 1933. The family was orthodox in its observance, and from 1934 to 1940 Hirsch attended the Tachkemoni school where the Judaic curriculum was taught in modern Hebrew. From 1940 to 1942, the first two years of the German occupation, he attended the public Flemish high school for boys. In the summer of 1942, after two years of increasing antisemitic persecution, the Nazis began deportations of Belgian Jews. The Grunsteins found shelter through the efforts of 22-year-old Alice Van Damme (later De Viaene). She had witnessed the violent round-up of Jews during a visit in Antwerp, and with her parents' consent, decided to return to Antwerp to rescue a Jewish child. She found Marcel and Johnny Sobolski, (aged 5 and 2) and brought them to the home of her parents, Emile and Léontine Van Damme, in the Flemish village of Belsele. Her father worked as the village blacksmith. After Mrs Sobolski told the Van Damme family about the Grunsteins, Alice's older brother, Gaston Van Damme and his wife Adrienne, offered to shelter Hirsch and Salomon. René Govaerts, a Flemish teacher at the Tachkemoni School, first brought Hirsch and Salomon to Belsele, and two weeks later he escorted the boys' parents. Benzion and Henia stayed there briefly and then moved to the neighboring town of St-Niklaas where they were confined to an attic and suffered throughout from hunger. Hirsch and Salomon Grunstein assumed the identities of Henri and Sylvain Govaerts. The Van Dammes explained that Sylvain (Solomon) was too sickly to attend school and needed the country air. They were caring for him since his own mother had been committed to a mental institution. Henri, the only responsible member of that disfunctional family, would appear on occasional Sunday "visits from Antwerp" and for the school holidays. In truth he spent his days hidden in Gaston and Adrienne's bedroom. He and Sylvain slept in a converted attic at night. In April 1944 Johnny and Marcel Soboski were denounced and arrested. When police searched the Van Damme house, Gaston escaped under a hail of fire, but Hirsch was discovered. The three children were turned over to the Judenrat in Brussels. In October 1942, Queen Elizabeth of Belgium obtained an agreement from the Germans that any Jewish children under the age of sixteen caught without their parents be taken to official children's homes administered by the Jewish community. Judenrat personnel took Hirsch, Marcel and Johnny to the Wezembeek-Oppem children's home. Johnny was then transferred to a home for small children in Linkebeek, and Hirsch went to the home for older children in the village of Aische-en-Refail. Adrienne was arrested the day after Hirsch's capture for refusing to reveal Gaston's hiding place. She was deported to the women's concentration camp of Ravensbrück. She survived slave labore and returned home in May 1945. After learning that Hirsch had been arrested, the couple hiding Benzion and Henia Grunstein chased them out for fear that Hirsch would betray them. Hirsch's parents found a new hiding place with Jozef and Josephine Van Poecke, also in St-Niklaas. The Underground then brought Salomon there as well. All three stayed with the Van Poecke's until their liberation. In August of 1944, the Germans ordered the arrest and deportion of the remaining, "authorized" Jews of Belgium. The six Judenrat homes with about six hundred children were alerted. Children and personnel wee evacuated, and with the help of the Underground, dispersed among the population, in schools and in convents. The Allies pulled into Brussels the next day. Hirsch was liberated by the Americans in Orbais, a village in the province of Brabant. The Grunstein family was reunited, but had to flee back to the Van Poecke home when Antwerp came under bombardment of German V-1 and V-2 rockets. In 1958, Hirsch immigrated to the United States, where he worked as an engineer. Salomon became a diamantaire in London. Benzion and Henia Grunstein passed away in the late eighties. The entire Van Damme family and the Van Poeckes were honored by Yad Vashem as Righteous among the Nations.