Gerhard Mahler poses with the children of a family in La Bourboule who hosted his bar mitzvah. 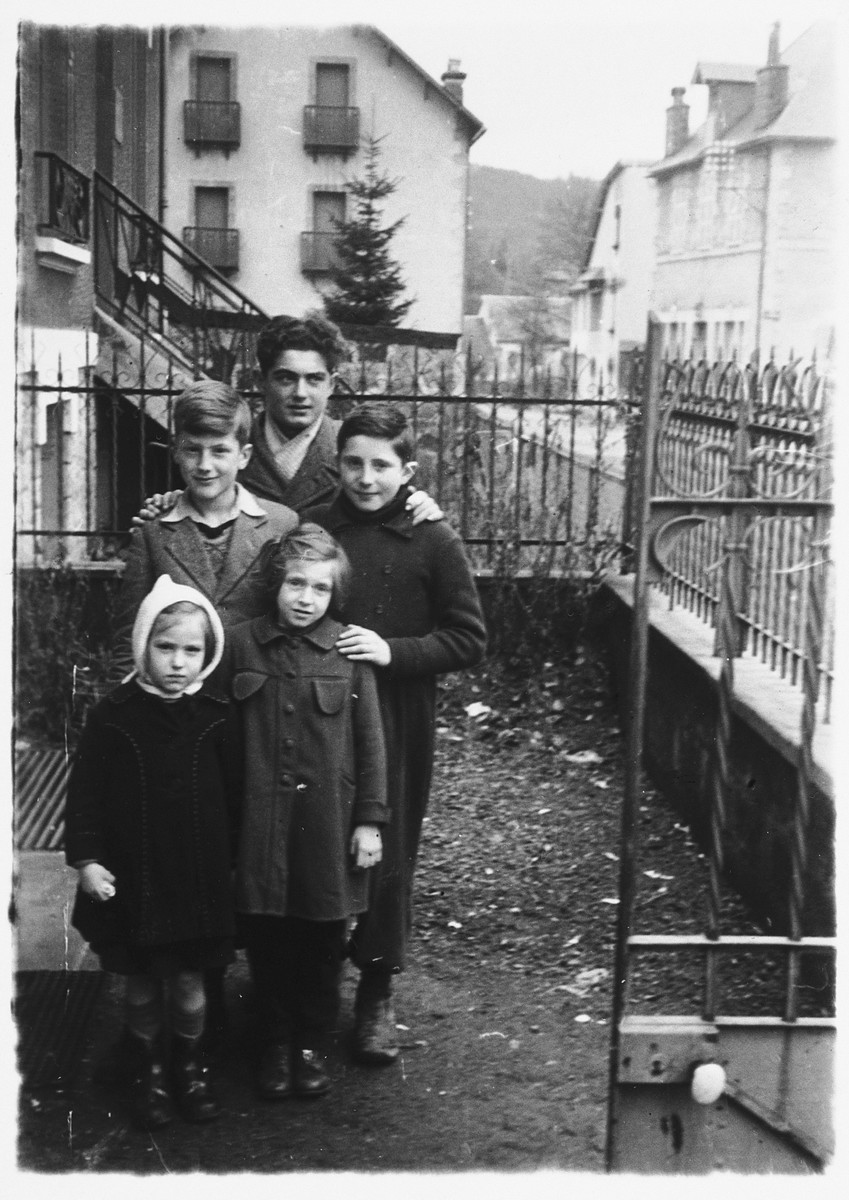 Gerhard Mahler poses with the children of a family in La Bourboule who hosted his bar mitzvah.

Gerhard Mahler is pictured in the middle, left.

Biography
Gerhard Mahler (later Gerald Watkins) is the son of Robert Mahler and Grete (Guttmann) Mahler Watkins. He was born in 1928, and his older sister Sylvia (later Cherny) was born in 1925. Both children were born in Vienna but grew up in Wieselburg in Lower Austria. His paternal grandfather and great-uncles established five paper mills throughout Austria, and Robert managed one of them. Robert and Grete divorced when the children were young, and Grete returned to her parent's home in Vienna where she studied pharmacology. Gerhard and Sylvia remained with their father cared for by nannies. One nanny, Ilse Huebner, cared for the children for 11 years. The Mahler family was very assimilated and celebrated Christian holidays at home. After completing elementary school in 1938, Sylvia went to high school in Vienna. Robert had an office there which he also used as a small apartment. His mother, Lore Mahler, and cousins also maintained apartments in Vienna. After Austria's Anschluss with Germany on March 12, 1938, the Nazis arrested some of Robert's cousins, sent to them Dachau and confiscated the family's factories. On March 17, 1938 the Gestapo began searching for Robert in his apartment. He was not at home and was not caught, but when he learned what had happened, he committed suicide later that night. After Kristallnacht, the Gestapo searched for Sylvia and Gerhard, but their father's Christian business partner, Dr. Trierenberg, and their nanny, Ilse Hubner, protected them. In 1939 their mother, Grete, remarried Peter Weinfeld, and they immigrated to Australia. Her parents, who were quite ill, remained in Austria and died soon thereafter. Meanwhile Robert's sister and brother-in-law, Ria and Hermann Wozasek sought ways for Gerhard and Sylvia to emigrate as well. In February 1939 the children were accepted on a Kindertransport to France. They were sent to the Chateau de La Guette, a mansion owned by Edouard and Germaine de Rothschild located near Paris, which served as a home for 130 German and Austrian Jewish refugee children. Meanwhile the Wozaseks and Lore Mahler immigrated to the United States. After the start of World War II Sylvia was transferred to a boarding school in Brittany called Saint-Briac, and following the German occupation of France, both siblings and the other children of La Guette were evacuated to La Bourboule in the Massif Central. There they stayed in the Hotel les Anglais owned by the Rothschild family. After one year, in May 1941, Gerhard and Sylvia learned that the Wazaseks had obtained the necessary documents for them to come to America. They traveled to Marseilles and from there to Lisbon, where on June 10, 1941 they boarded the Mouzinho for New York. Their mother had been ltrying to bring the children to Australia but had been unsuccessful in obtaining visas for them. Finally their Australian visas were approved in August. The children took a train across the United States, and on September 19, they boarded a ship in San Francisco for Australia. They arrived on October 8 and Peter Weinfeld, now Watkins, greeted his stepchildren in Sydney harbor. Peter Watkins adopted Gerhard and Sylvia in 1944.