Genia Glowinski fetches water while on vacation in a small village. 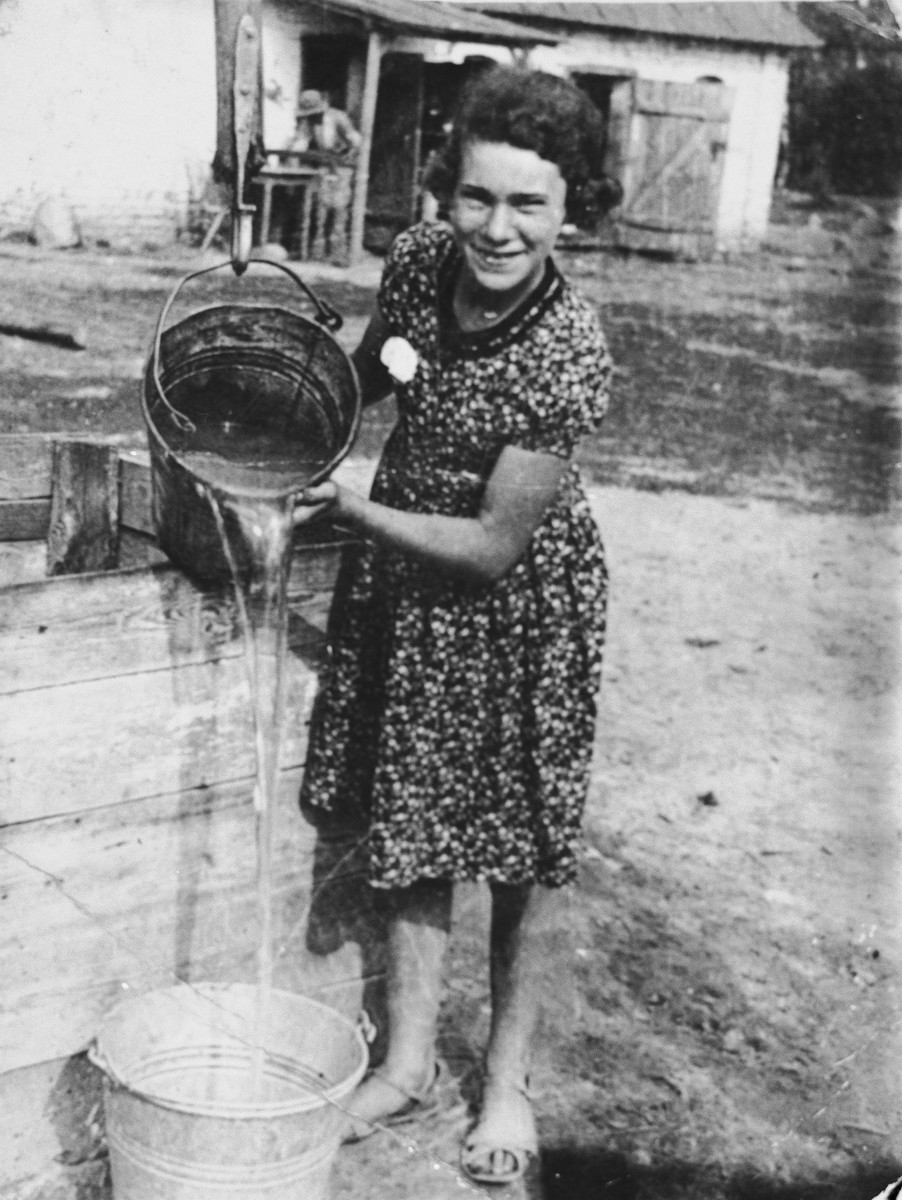 Genia Glowinski fetches water while on vacation in a small village.

Biography
Ruth Marks (born Roma Glowinski) is the daughter of Ephraim Glowinski and Hela (Lubelski) Glowinski. She was born on February 14, 1931 in Kalisz, Poland. Her father sold animal hides, and her mother was the founder and principal of the Familina School, a Jewish private school. Roma had an older sister Genia born in 1924. Though the family had a strong Jewish identity, they were not observant and spoke Polish at home. During the summer of 1939, while on vacation, Roma's parents felt an impending sense of war. They returned early from vacation and began to flee East. Germany invaded Poland a few days later. German Meserschmidts bombed their route, forcing the Glowinskis to return to Kalisz. In later November, the Germans evicted several thousand Kalisz Jews from their homes, including the Glowinskis and deported them to Sandomierz. Though the Nazis prohibited Jewish children from attending school, after the Glowinskis found an apartment, Hela clandestinely tought Jewish children from both Kalisz and Sandomierz. After some time, Roma's 24 year-old cousin, Gucia arrived in their apartment, having escaped the Warsaw ghetto following the death of both her parents and brother. Then in October 1942, while doing forced labor, a German soldier passed Genia a note warning her that the ghetto in Sandomierz was about to be liquidated. The family decided that Gucia would return to Warsaw with Roma and find a hiding place where the rest of the family could join them later. Gucia and Roma left on October 10, 1942. Two weeks later, on October 29, most of the Jews in Sandomierz, including Roma's family, were deported probably to Belzec where they perished. Gucia and Roma went to the home of a former employee of the family who arranged for them to stay with Anna and Andrzej Kostrzewa, a Polish couple who lived in Prushkow near Warsaw. The Kostrzewas claimed that Roma was a distant relative whose father was a Polish officer killed by the Germans and whose mother died in the bombings in Lublin. Gucia also claimed to be a distant relative. The Kostrzewas acquired false papers for Gucia under the name Halina and a priest supplied a birth certificate for Roma under the name, Vislava Serafinska. Andrzej had worked as a school concierge until the Germans closed the school. Anna supported the family by washing uniforms for German soldiers. To augment her meager wages, Gucia darned socks, and Roma did chores for neighbors. Gucia also sold food on the black market. She was arrested during one of her trips to Warsaw, and after revealing that she was Jewish, she was executed. After this incident, the Kostrzewa's neighbors began to suspect that Roma also was Jewish. However, despite the rumors and inherent danger, Roma became closer to the Kostrzewas, and Anna and Andrzej cared for Roma like their own daughter . On January 17, 1945 a Polish brigade of the Russian army liberated Prushkow. Roma, desperate to find any surviving relatives, registered with the Jewish authorities in Kalisz. Friends of her parents, who had lost their own child, spotted her name and invited her to stay with them. Since Roma had promised her mother before going into hiding that she would not forget her roots, she decided to go with them though it meant abandoning the Kostrzewas. The Kostrzewas were quite hurt by her decision and initially refused to answer her letters to them. Soon afterwards, in 1946 Roma decided to immigrate to Palestine and approached the office of Rabbi Herzog in Warsaw. They sent her to a JDC sponsored children's home in Zabrze where she joined a group of other children who also had survived in hiding. That fall, she and the other children came to Strasbourg France via Prague. Roma wrote to the Kostrzewas from France, and they, now understanding her motives, became reconciled to her leaving them. After receiving a Palestinian visa from her Uncle Izhak (her father's brother who had immigrated to Palestine in the beginning of the 1930s) Roma sailed to Palestine from Marseilles on board the Providence. She attended nursing school and then joined the Israeli army where she met her future husband, Uri Marks, an immigrant from South Africa. Roma remained in touch with Anna and Andrzej Kostrzewa, and in 1988 Yad Vashem recognized them as Righteous Among the Nations.