Group portrait of teachers and students of the Hebrew language school in Sanisesti, Romania. 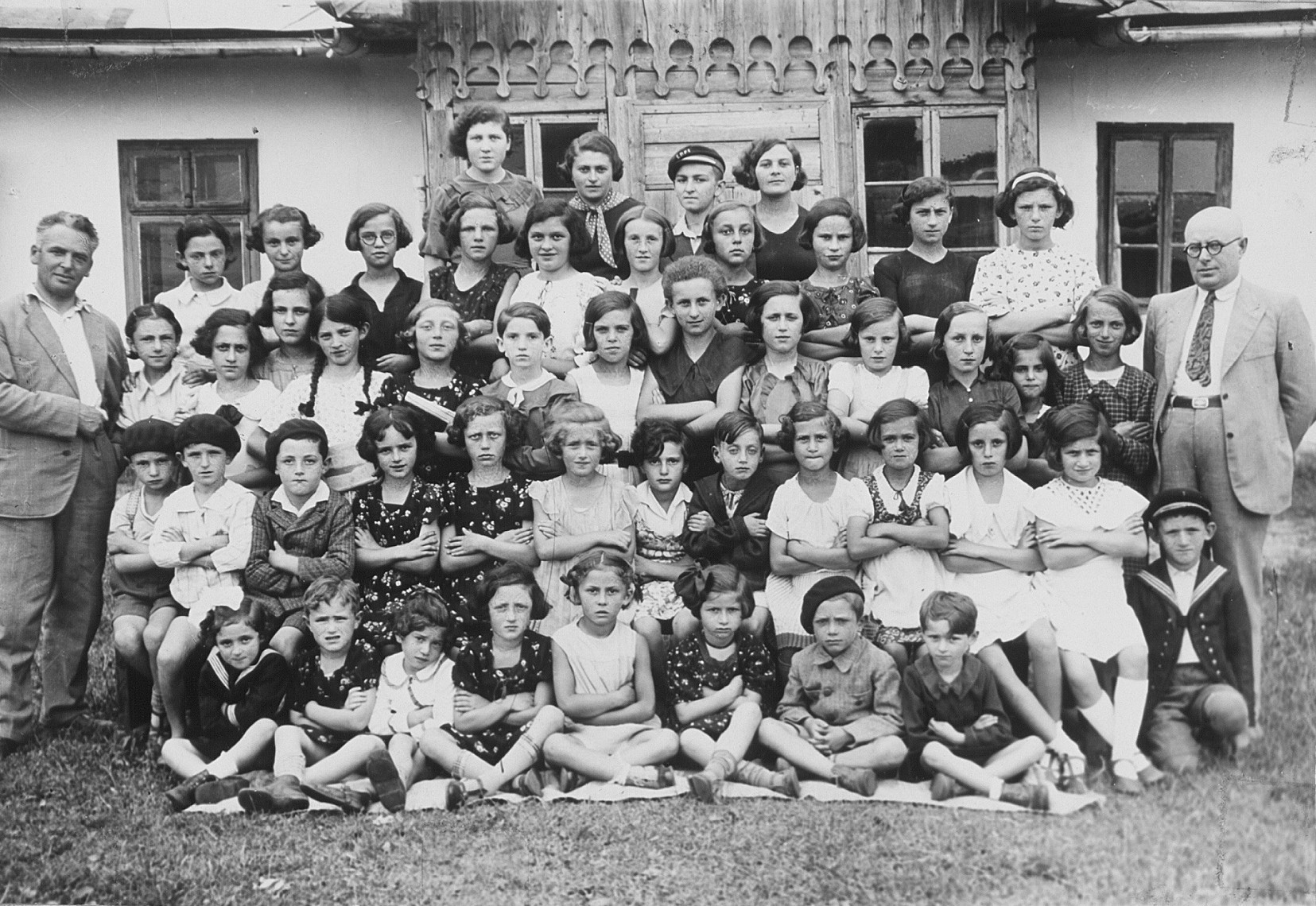 Group portrait of teachers and students of the Hebrew language school in Sanisesti, Romania.

The photo was taken on the occasion of the fifth anniversary of the school in 1936. Among those pictured is Ephraim Neuman (the man standing on the far right).

Biography
Erika Eckstut (born Erika Neuman) is the daughter of Ephraim and Dolly (Geller) Neuman. She was born June 12, 1928 in Znojmo, Czechoslovakia, where her father was a lawyer. Her mother received a degree in business and worked in a bank before the birth of her children. Erika had one older sister, Beatrice (b. 1924). The family moved to Stanisesti, Romania in 1930, where Erika's father became the mayor. In 1941, when several Jews from the town were massacred by local residents, the Neuman family fled to Cernauti with the help of the chief of police who had been a friend of Erika's father. In Cernauti the Neumans were forced to live in the ghetto. With the help of a local priest, the Neumans obtained false papers for Erika and Beatrice, and the girls left the ghetto in 1943. They fled to Kiev, where Erika obtained work in a clinic. Towards the end of the war, when a nurse at the clinic mistook Beatrice for a German and informed on her to the NKVD, the sisters decided to leave and go back to Czechoslovakia. On their way home, Beatrice was again mistaken for a German by a group of Russian soldiers and only narrowly escaped arrest. In the town of Snina on the Polish border, the sisters met up with soldiers from the First Czech Army. One of them, Eugene Rada, fell in love with Beatrice and they were wed in March 1945. Erika meanwhile had developed a relationship with Eugene's best friend, Robert Kauder, a Czech Jew. Before the war, Robert had been a medical student. Soon after the German takeover of Czechoslovakia, Robert fled to the Soviet Union. The Soviets then deported him to a labor camp in Siberia, where he remained until 1942. Upon his release, Robert joined the Svobodova Armada, a Czech battalion formed by the Czech government-in-exile, where he met Eugene. By the close of the war the two couples had reached Prague. Erika and Robert were married on August 28, 1945 in Jesenic, where Robert's unit was stationed. They lived there until 1948, when they moved back to Prague. Erika's parents survived the war in Bucharest, but her father died from natural causes shortly after the liberation.