Three young women, one of whom is wearing a star, stand on a street corner. 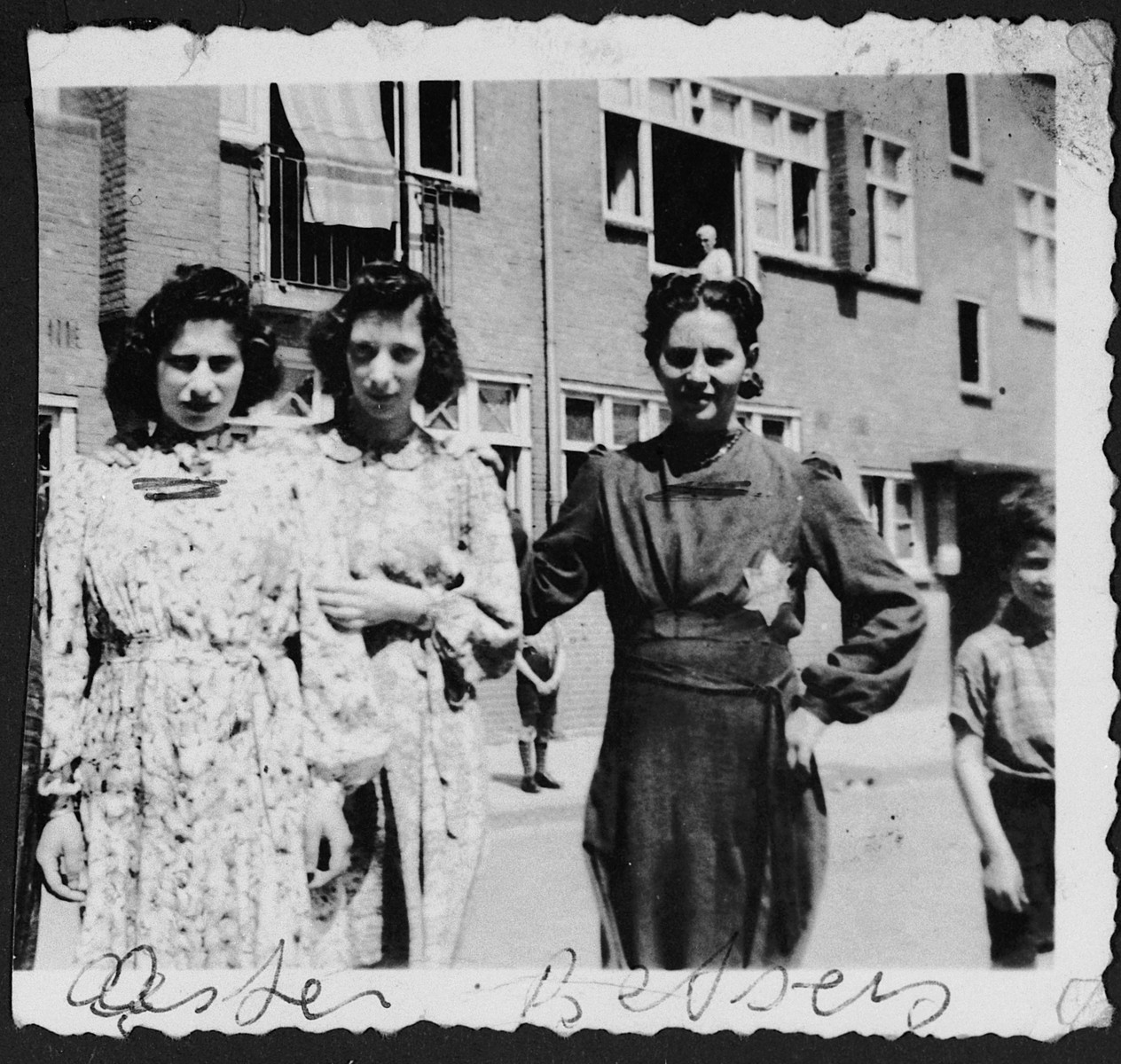 Three young women, one of whom is wearing a star, stand on a street corner.

From left to right are Esther Swaab Franschman, [unidentified], and Betsy Visser Swaab.

Biography
Elisabeth Munichman (Elisabeth Blind) was the only daughter of Cornelius Blind and Schoontje Visser (b. December 2, 1909). She was born in Amsterdam in 1932. Her parents divorced before the war, and Elisabeth lived with her mother. During the war the Dutch underground supplied Schoontje and Elizabeth with false identity papers and secured various hiding places for them. Willem Schalbroeck, a member of the underground, lent them particular assistance. He even went to Westerbork to try to secure the release of Schoontje's parents, Benjamin and Henriette Visser. He brought them false papers and food but unfortunately came too late to save them. They were deported to Auschwitz on March 14, 1944 and were killed twelve days later. Once the Germans arrested Willem himself but they later released him. One day Elisabeth went to get milk, and a Dutch woman who lived across the street spotted her walking into the store. The woman followed Elisabeth and asked the shop owner why was he allowed a Jew into his store. Though he knew who she was, the milkman denied that Elizabeth was Jewish. The woman then dragged Elisabeth out of the store by her hair. Often, Elisabeth traded potato peels for food and milk on a street near an assembly point for Jewish deportation. Schoontje's sister, Betsy Visser Swaab, and her family lived nearby. One day, Schoontje sent Elisabeth over to Betsy's house to get some sugar. Elisabeth noticed many people gathered together on the side of the road, and so she stopped to ask what was going on. She was informed that the Germans were collecting people close to where her aunt and cousin lived. Elisabeth then witnessed the round-up of her aunt and cousin Henriette and saw them carrying a pillowcase full of their personal belongings. Betsy was deported to Auschwitz where she died on May 21, 1943. Henriette perished in Auschwitz at the age of 13 on May 2, 1943. Betsy's other daughter, Esther Swaab Franschman, was killed along with her five-month-old son Mozes at Auschwitz on April 9, 1943. The fate of her husband Sam and her son Jacob remain unknown. Schoontje also had 5 other siblings. Levi Visser (b. June 29, 1907) was among the first people to be sent to Westerbork transit camp. He was very close to Elisabeth and often mistaken for her father. Levi was deported to Auschwitz where he died on September 30, 1942. Jacob Visser (b. November 16, 1913) married Marianne Rood. They were first sent to the Vught concentration camp, and later to Auschwitz where Marianne died on September 24, 1943, and Jacob died on January 8, 1944. Sara was married to a non-Jewish man, and survived with her son Jonas. Max Visser survived in hiding, and Josef Visser died before the war. Schoontje and Elisabeth were liberated in Amsterdam in May 1945. With the assistance from a Jewish organization, Elisabeth went to recuperate in Switzerland for three months. She was later sent to Denmark and then rejoined her mother in Amsterdam. Schoontje married Willem Schalbroeck in 1948. Elisabeth immigrated to the United States in 1953, and her parents followed a few years later.