Four young girls from Germany, including Anne and Margot Frank, have a tea party with their dolls at the home of Gabrielle Kahn in Amsterdam. 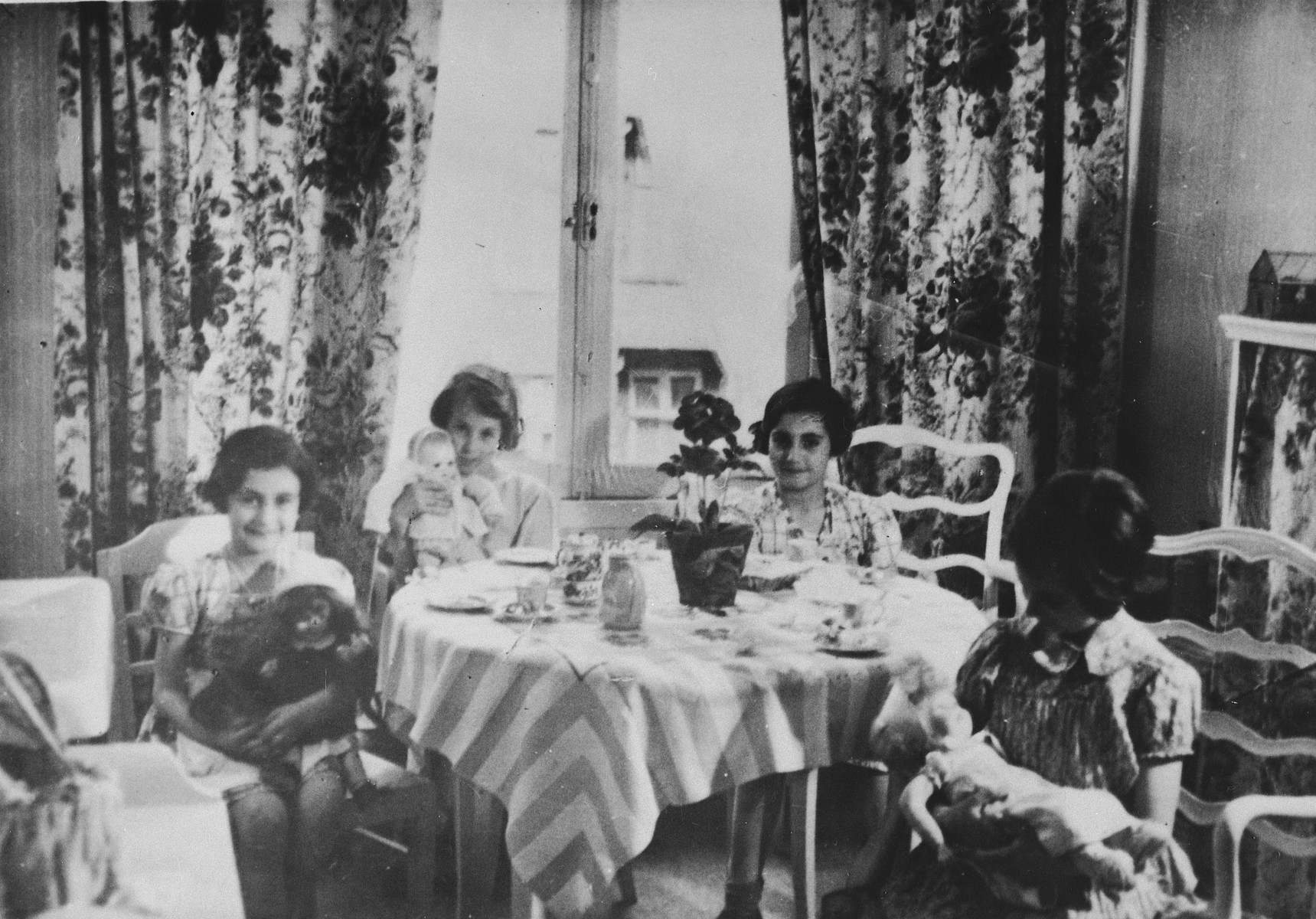 Four young girls from Germany, including Anne and Margot Frank, have a tea party with their dolls at the home of Gabrielle Kahn in Amsterdam.

Biography
Gabrielle Gilbert (born Gabrielle Kahn) is the daughter of Richard and Annelies (Koppel) Kahn. She was born July 24, 1927 in Mannheim, Germany, where her father was an attorney for the Deutsche Bank. The Kahns were a prosperous, assimilated Jewish family. In 1933 after Hitler came to power, the Kahns fled to Paris, leaving almost all of their possessions behind. Gabrielle and her governess were sent to London, but joined her parents in Paris after a few months. Annelies' parents, Paul and Helena Koppel, were on vacation outside Germany at the time of the Nazi seizure of power and elected to immigrate then and there to the United States, rather than return to Germany. Before leaving Germany, Richard Kahn distributed many valuable possessions among friends and family members. The goods were then sold and the resulting revenue supported the Kahns during their long years of wandering. In 1934 the family moved to The Netherlands, where they lived for eight years, first in Amsterdam and then in Amstelveen. While in Amsterdam, the Kahns socialized with the family of Anne Frank, and the children attended school together. Richard Kahn and Otto Frank, the father of Anne Frank, had served in the German army together during World War I. After the war, they remained friends and Richard aided Otto in his business endeavors. When the Germans invaded Holland in May of 1940, the Kahns were living in Blaricum, a village to the east of Amsterdam. During the occupation the Kahns hid for a year and a half with the family of Gabrielle's Catholic nanny, Irene Kaufer. Richard used his legal connections to prevail upon the mayor of Blaricum to erase the family's names from the town register, thus providing them with a measure of protection from arrest. Richard was able to leave the house a few times to go to nearby Hilversum to apply for the documents he needed for his family's emigration. With the assistance of a former law school colleague, who had become a Nazi official, Richard was able to secure these papers in the fall of 1941 and arrange for the family to be picked up by car in the middle of the night and driven out of the country. The family followed a circuitous route through Belgium, France, Spain and Portugal before sailing for the United States. The Kahns eventually settled in upstate New York. They were supported initially by Governor Herbert Henry Lehman, the Democratic governor of New York, who was Annelies' uncle.

Gabrielle (Kahn) Gilbert's sons, Scott and Clement, attended Grace Church School in New York, where the family became friends with the school's administrator, Rev. Al Grant. For a school project, Scott brought in his mother's photos with the Frank family to illustrate his family's background. Rev. Grant made copies of the photographs and ultimately passed them along to his granddaughter, Penny Boyer.