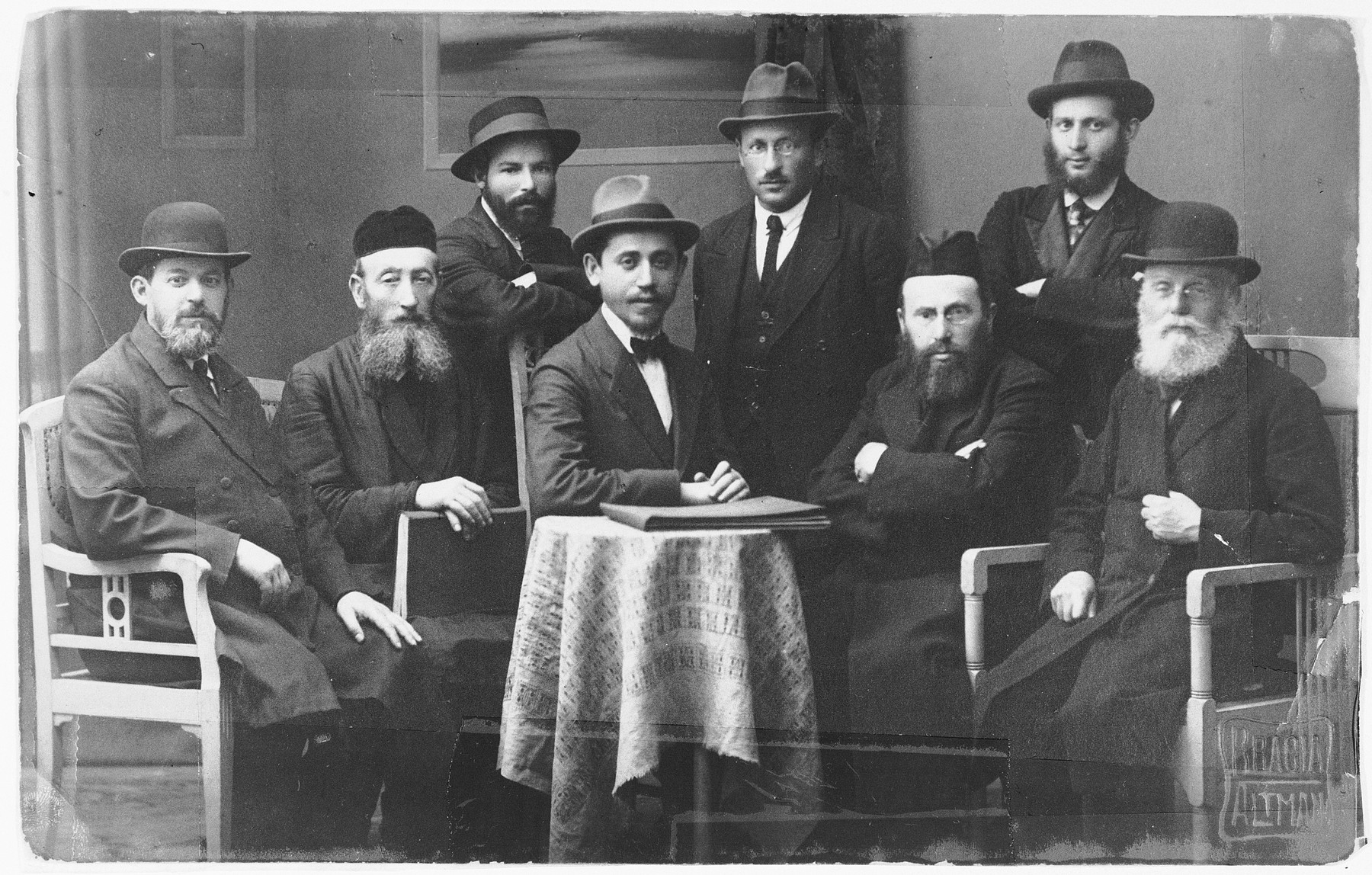 Seated first from the right is Yosef Israel Wroncberg who was a rabbinics teacher.

The photo was taken in the studio Stanislas Altman, a Jewish photographer who perished in Auschwitz.

Biography
Halina Wroncberg (now Masri) is the only child of Henryk Wroncberg and Chaja Sara (Zofia) Bleiweiss Wroncberg. Henryk and Zofia were cousins. Zofia's mother, Tzipora Wroncberg Bleiweiss was the sister of Yosef Israel Wroncberg, Henryk's father. Halina was born on August 22, 1934 in Warsaw. Henryk was a chemical engineer, educated in Vienna. He died in 1937 at the age of 42 when Halina was still a toddler. Zofia's had three sisters: Rozia (Rachel), Tecia (Yona) and Regina (Rivka) immigrated to Palestine in the early 1930's. Tzipora Bleiweiss traveled to Palestine to visit her three daughters in 1938 and could not return to Poland before the start of the war. Zofia also had three brothers: Henryk, Moniek, and Jakubek. Henryk lived in Leipzig Germany and worked as furrier. Moniek married Rena Karmazyn and had a daughter Janka; all three perished in the Warsaw ghetto. Jakubek had a wife and three sons in Radom.

In the fall of 1940, Halina and her mother, Zofia were forced to move from their apartment to the Warsaw ghetto. They escaped the following year. Zofia's Polish friend, Renia Bockowska (now Czaczkes) and her husband arranged for them to leave the ghetto via the courthouse. They obtained false papers for Halina and Zofia and arranged for them to get Catholic religious training at the church on Plac Zbawiciela. Sometime in the summer of 1941 Halina and her mother were baptized in that church. Halina became Halina Jolanta Chmielewska, and her mother went by Jadwiga Stanislawa Chmielewska. Initially Halina and her mother stayed in an apartment rented by Renia. In the fall of 1941, Halina enrolled in a Catholic convent boarding school "Siostry Zmartwychstanki". After some time, the mother superior of the convent received permission to move the school to a summer palace of Count Radziwill in Stara Wies, some 30 miles east of Warsaw. At that time Zofia lived with another friend from before the war, Rita Bauman Hasslauer, her husband, and daughter, Jolanta. They resided on Aleje Shucha, the same street where the Gestapo headquarters were located. Rita Hasslauer worked as a translator for the Gestapo. Although Zofia, with the help of Mrs. Hasslauer's, visited Halina a few times in the convent, after liberation, Halina resisted leaving the convent and returning to her mother. Zofia prepared a new room for Halina in Brzeg, in western Poland, and Halina moved in with her mother, but continued to go to church and wear a cross. In 1948, Halina and Zofia moved to Lodz, and on January 31, 1950 they immigrated to Israel where they joined their family. Halina served in the Israeli Army, married and later immigrated to the United States.