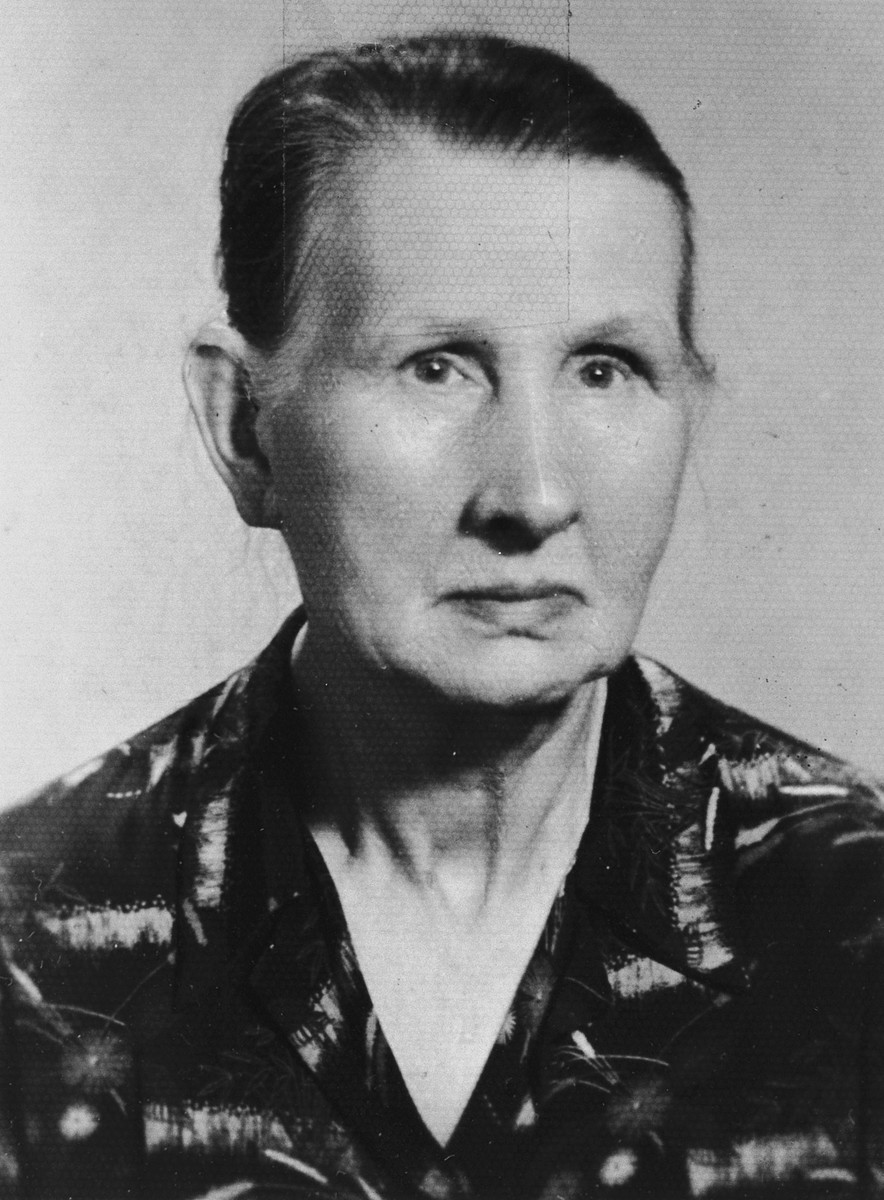 Biography
Nava Ruda (born Sheindl Charlotte Kohn) is the daughter of Isaac Kohn (b. 1899, Podpolowce, Poland) and Rosa Batia (nee Halber) Kohn (b. 1899, Lvov). She was born in 1935 in Lvov where her parents owned a household goods store. They later opened a second store that sold milk and bakery products. Her older brother Shlomo was born on August 20, 1927. Though Charlotte's parents grew up in Orthodox homes, her family was traditional but not strictly observant. Since Rosa kept busy running the store, she hired nursemaids to care for her children. From the time Charlotte was two years old, Jula Jurek, a single Polish Catholic woman from Brody, lived with the family as the children's nanny. After the Soviet Union occupied Lvov, following the start of World War II, Isaac and Rosa lost their stores. Isaac went to work for a knitwear workshop, and Charlotte attended a Communist preschool. On June 30, 1941 the Germans captured Lvov and immediately a pogrom broke out in the city. Soon thereafter, Jews had to wear a white armband and evacuate certain neighborhoods. Since the Kohns had been living outside the established Jewish neighborhood, they moved in with close friends, the Friedentals and stayed with them for about a year. Jula remained in their abandoned former home and visited them often. During this time, the Germans conducted several round-ups of Jews. During the first round-up, the Kohns successfully hid in the Friedental's brush workshop, behind a concealed door. During the second, Charlotte escaped to the Polish sector of Lvov. However, in August 1942, Shlomo was captured. The family first thought he had been sent to Belzec until they received a postcard from him reassuring them that he had been taken to Plochow, a labor camp near Zloczow. On September 1, 1942 Germans sealed off the ghetto, and the Kohns had to move again, together with the Friedentals. Isaac lived separately with others workers from the knitwear workshop. Since the workshop was located outside the ghetto, he was able to smuggle food to his family. Rosa managed to visit Shlomo in Plochow on several occasions, traveling as a Polish woman together with Jula. On one visit she discovered that Shlomo was sick with typhoid. Rosa stayed and nursed him only to contract the disease herself and later infect Charlotte upon her return to the ghetto. In February 1943 Charlotte, Rosa and Regina Friedental were caught and taken to a detention center. From there, they were to be supposed to be transported to a killing center in Piaksi. However, when it was time to leave the detention center, Rosa could not find Mrs. Friedental and went to look for her. As a result of this delay, they ended up boarding the very last truck. By coincidence, two Germans stopped this truck and ordered that it temporarily return to the prison. In the meanwhile, Isaac had learned that his family had been rounded up. Through the help of a Jewish policeman, he somehow obtained their release, and Rosa and Charlotte temporarily went to live with Isaac. They also made contact with Jula Jurek, and in March 1943 Charlotte met her near the ghetto fence. Since Jula was then living with her brother-in-law who did not want to hide a Jew, Jula brought Charlotte to her brother's home in Przemysl. He did not know she was Jewish. Charlotte made up a name for herself which later proved dangerous once Jula obtained papers for her under the name Helena Jurek. The neighbors eventually became suspicious, so Charlotte returned to Lvov to live with Jula who now had her own apartment. She told everyone that Charlotte was her niece. Charlotte at first accompanied her to work, but once this became too dangerous, she stayed in the apartment all day. Meanwhile, on June 1, 1943 the Germans liquidated the Lvov ghetto and transferred Charlotte's parents to Janowska. Once, Jula brought Charlotte to Janowska to secretly exchange glances with her mother. Over the next few months, both of Charlotte's parents managed to escape separately and join Charlotte in Jula's apartment. During the spring of 1944, Jula's sister-in-law visited and warned her of the consequences of hiding Jews. Jula panicked and though she continued to keep Charlotte, she told Isaac and Rosa that they had to leave. This proved lucky because a few days later a neighbor forced his way into her apartment looking for Jews. Rosa found a job as a nanny; Isaac, who had nowhere to go, lived on the streets until he was caught by two Ukrainians. They brought him to a prison where he was beaten and set upon by dogs before being returned to Janowska. During the summer of 1944, the Germans began their retreat from eastern Poland. Isaac managed to escape one last time from Janowska and hide with his wife until the Soviets liberated Lvov on July 26, 1944. After liberation, Charlotte learned that all the prisoners in Plochow, including her brother Shlomo, had been murdered during the summer of 1943. Almost all of her extended family was also murdered. After the war, the Kohns initially stayed in Lvov and then moved to Breslau in May 1945. Isaac opened a clothing store, and Charlotte attended school and joined the Zionist youth movement, Gordonia. However, the family did not want to remain in Poland. They decided to immigrate to Israel to join Isaac's brother, Ephraim, who had settled there before the war. They traveled to France and boarded the Atzmaut in the Marseilles harbor, arriving in Israel on January 11, 1949. In 1984 Julia Jurek was recognized by Yad Vashem as Righteous Among the Nations.

[source: Ruda, Nava, "One day This will be a Film", unpublished manuscript, USHMM archives]