Sculptor Naum Aronson poses next to his sculpture of Louis Pasteur. 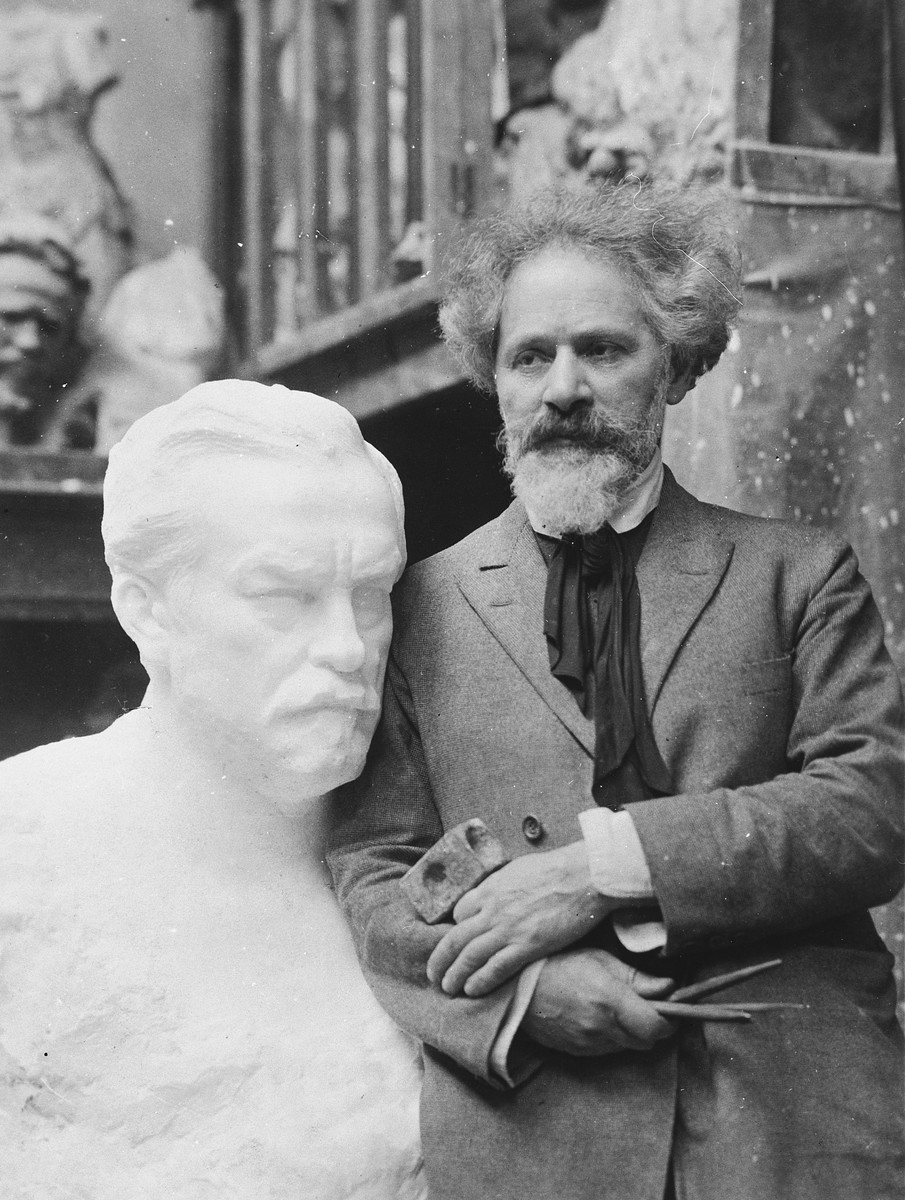 Sculptor Naum Aronson poses next to his sculpture of Louis Pasteur.

Biography
Naum Lvovich Aronson (1872-1943), Russian-Jewish sculptor known for his portraits, monuments, and busts of prominent political and scientific figures, including Louis Pasteur, Spartacus, Rasputin, and George Washington. Born in Kreslavka, Russia (now Latvia) to a prosperous, observant Jewish family with 10 children, Aronson began sculpting at an early age. When he was 16 years old, Aronson left home to attend the drawing school of Ivan Trutnev in Vilnius, but he returned home after 10 months due to his encounters with anti-Semitism. Subsequently, he decided to move to Paris. Although his parents were not supportive of his plan, Aronson left for the French capital in 1891. To support himself, Aronson began selling his carved marble pieces. He attended the Ecole des Arts Decoratifs for a year while also studying at the studio of Professor H. Lemaire and at the Colarossi private art school. [According to some sources, while in Paris, Aronson befriended the sculptor, Auguste Rodin, and began working with him.] It is known that Aronson admired the works of Michelangelo and Rodin, and their influence is apparent in his earlier works. His art was also influenced by his Jewish background. Many of his sculptures depict Jewish and Biblical figures. In 1894, Aronson decided to return to Russia and join the army. Two years later he was back in Paris and picked up his career where he had left it. In 1897, his works started to be exhibited on a regular basis at the Salon du Champs de Mars, and soon he was invited to join the Salon's jury. His growing reputation led to the exhibition of his art at the International Art Fair, Exposition Universelle in 1900. Aronson's works were also displayed in Russia, and the artist made many visits to his homeland to supervise the installation of his sculptures. He also participated in a design contest for a monument to Mikhail Glinka in St. Petersburg. Aronson felt a close connection to the Russian people and culture, but anti-Semitism kept him from returning permanently. Following the German occupation of France, Aronson and his wife emigrated to the U.S. in 1940. He settled in New York, where he was treated with warmth and respect, remaining there until his death in 1943.