Varian Fry (left) views a Chagall painting outside the artist's home in Gordes. 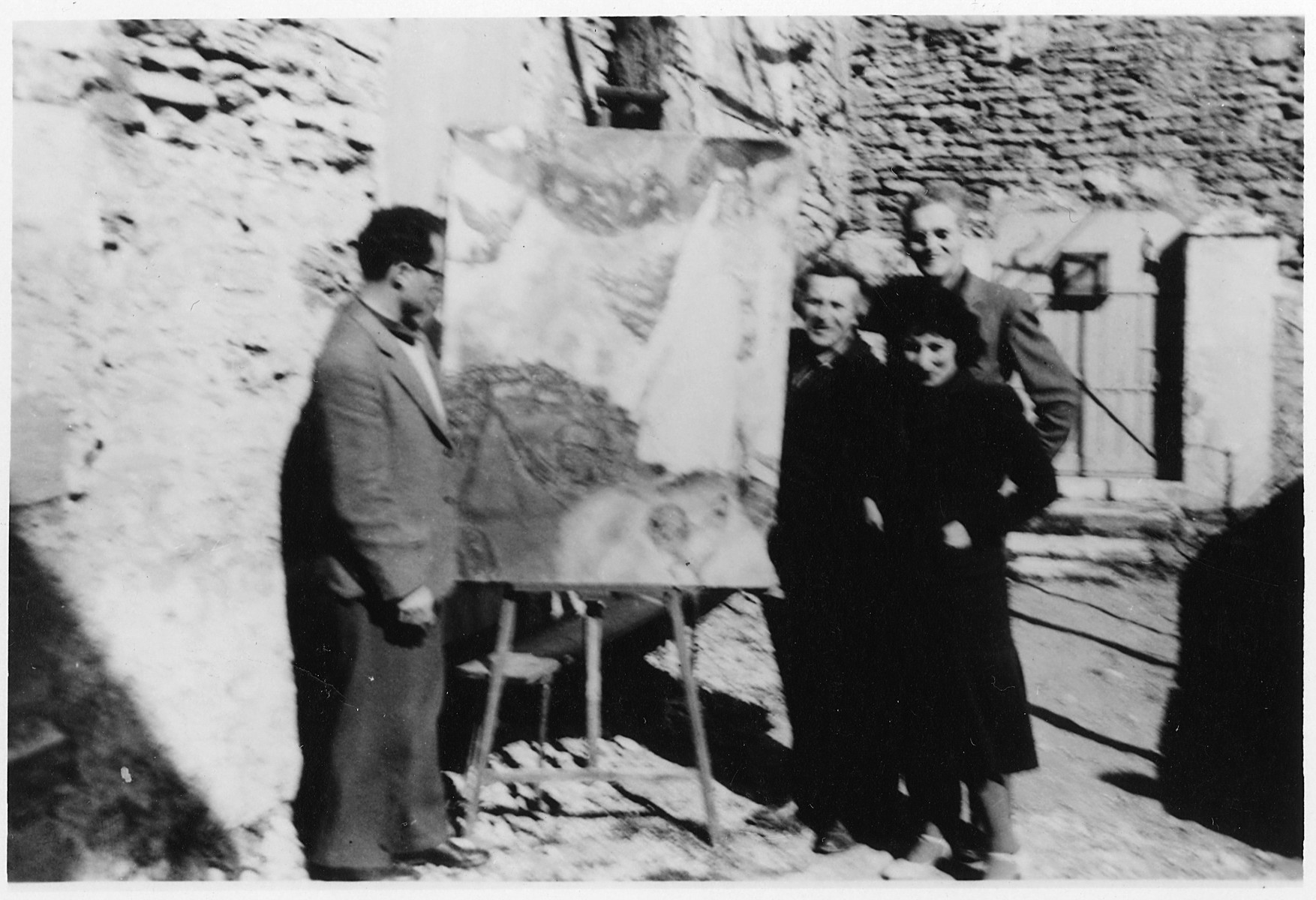 Varian Fry (left) views a Chagall painting outside the artist's home in Gordes.

[Greenberg, Karen J. Columbia University Library, New York: the Varian Fry papers: the Fort Ontario Emergency Refugee Shelter papers. New York: Garland, 1990; Gold, Mary Jayne. Crossroads Marseilles 1940. Garden City, N.Y.: Doubleday, 1980.]
Biography
Marc Chagall (formerly Moshe Segal, 1887-1985), Russian Jewish painter. Chagall was born into a large, poor hasidic family in Liozno, Vitebsk. His father earned a living working in the warehouse of a herring monger. After attending cheder as a child, Chagall was sent to a public school, where he discovered his artistic talent. Against the wishes of his father, but with the support of his mother, he enrolled in a local art school. In 1907 Chagall moved to St. Petersburg, where he was awarded a scholarship to study at the Imperial Society for the Furtherance of the Arts. Subsequently, he attended the Svanska school, where he studied under the well-known Jewish artist Leon Bakst. Chagall's work was greatly admired by the Jewish lawyer Maxim Vinaver, who provided the young artist with a monthly allowance so that he could go to Paris. There, he joined a group of Jewish émigré artists from eastern Europe who later became known as the Ecole Juive [Jewish school], a sub-group of the Ecole de Paris [School of Paris]. In the spring of 1914 Chagall opened his first one-man exhibition in Berlin, and from there returned to Vitebsk. The outbreak of the World War I prevented him from returning to Paris. One year later he married Bella Rosenberg, who became a major inspiration of his artistic work, even after her premature death in 1944. After the Bolshevik revolution of 1917 Chagall became commissar for fine arts in Vitebsk, then director of the Free Academy of Art, and finally, designer for the Kamerny State Jewish and Habimah theaters in Moscow. Despite notable artistic successes, Chagall was unable to support his family in Russia and decided to leave in the summer of 1922. After spending a year in Berlin, he settled in Paris, where he gradually gained international recognition. After the rise to power of National Socialism in Germany, 57 of Chagall's works were confiscated from public collections. Some of these paintings were later held up for public ridicule in the Degenerate Art exhibition in Munich in 1937. In the wake of the German invasion of the Low Countries in the spring of 1940, Chagall moved his family to the south of France, where they found a home in the Provencal village of Gordes near Avignon. Chagall dreaded the thought of leaving France and stubbornly refused all efforts to help him emigrate until Varian Fry, director of the Emergency Rescue Committee, arrived with an invitation from New York's Museum of Modern Art to come to the U.S. Chagall initially declined the invitation, fearful of crossing the ocean and moving to an unknown cultural environment. However, after the Vichy government began interning Jews, he realized he had no choice, and on May 7, 1941, he, his wife and daughter, Ida, crossed the border into Spain. From there they traveled to Lisbon, where they found passage on a cargo ship to the US. Chagall was warmly greeted by the American art world, and because he had managed to send ahead all of his paintings and studies, he was able to get back to work soon after his arrival in New York on June 23. Never feeling quite at home in America, Chagall returned to France in 1948, and in 1952 married Valentine Brodsky. For the next three-and-a-half decades Chagall exhibited widely and received numerous commissions. His oeuvre included paintings, etchings, lithographs, sculptures, ceramics and designs for costumes, stage sets, stained glass panels and other media.

Hiram (Harry) Bingham IV (1903-1988), Vice Consul at the US consulate in Marseilles from 1939 to 1941, who worked with American rescue committees to help save more than 2,500 Jews and political opponents of the Nazi regime who were caught in France after the country's defeat. The son of a Connecticut governor and US Senator (and noted archaeologist, who unearthed the Inca city of Machu Picchu, Peru in 1911), Hiram Bingham IV was raised in a family of wealth and privilege. After graduating from Yale and attending Harvard Law School, Bingham went into the foreign service. In December 1936 he was posted to the US consulate in Marseilles, where he served as vice consul in charge of the visa section. Sympathetic to the plight of the refugees, who were being incarcerated in French concentration camps, Bingham developed contacts with members of the French resistance. Later he used these contacts to assist the rescue efforts of Varian Fry's Emergency Rescue Committee and Frank Bohn's American Federation of Labor committee. In violation of US State Department regulations, Bingham issued hundreds of visas beyond State Department quotas and falsified others to provide cover for individual refugees. He also provided the rescue committees with special papers that enabled refugees detained in French concentration camps to be released into Bingham's custody. Once they were released, the Vice Consul issued affidavits in lieu of passports and visas to the US. In addition, he helped Fry devise escape plans, offered his villa as a safe house for many prominent refugees and, on several occasions, personally escorted individuals across the border into Spain. When Varian Fry and more than a dozen members of his rescue network were arrested and detained by Vichy authorities on a prison ship, Bingham intervened to secure their release. The growing opposition of US Consul General Hugh Fullerton to his deputy's involvement in rescue efforts was a contributing factor to Bingham's reassignment to Lisbon in late April 1941. A few months later, in September 1941, he was transferred to Buenos Aires, where he sent back reports to the State Department warning about the Nazi infiltration of Argentina and the smuggling of looted gold into the country. His warnings, however, were not heeded. Disappointed by his experience, Bingham resigned from the foreign service at the end of 1945. He died almost penniless in 1988. Bingham was survived by his wife Rose and eleven children: Rose Tiffany, Hiram Anthony, Thomas, John, David, Robert Kim, Maria Cecilia, Abigail, Margaret, Benjamin and William. Although family members knew some of the details of his work in Marseilles, the whole story of Bingham's involvement in the rescue of refugees from Nazi persecution was not revealed for many decades until his youngest son discovered a bundle of documents in a cupboard behind a chimney in the family home. In 2002 Bingham was given a posthumous award for "constructive dissent" by the American Foreign Service Association. It was presented by US Secretary of State Colin Powell.