Jewish servicemen attend a religious service in the synagogue in Bad Nauheim, Germany. 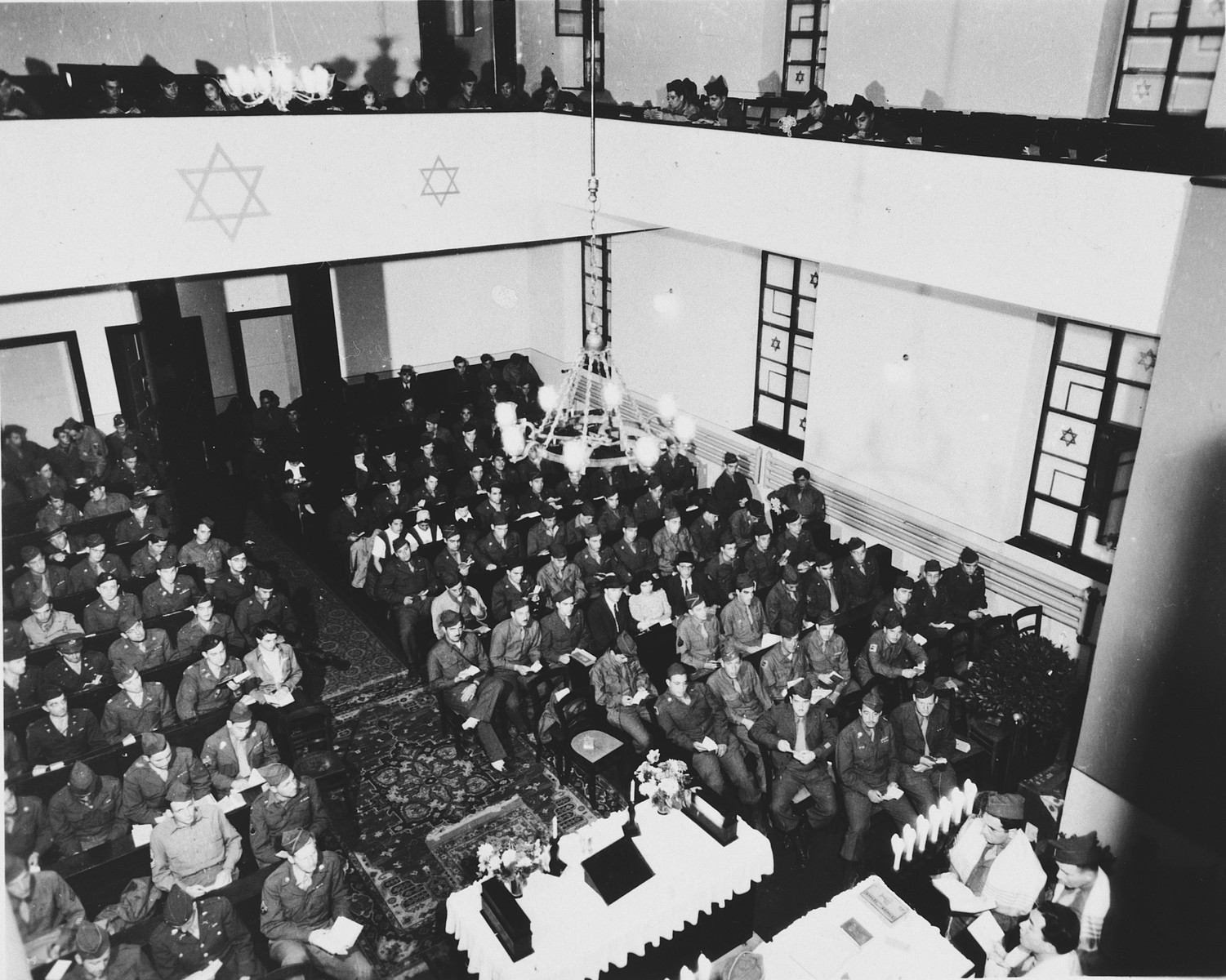 Jewish servicemen attend a religious service in the synagogue in Bad Nauheim, Germany.

Gisela Eckstein was among the survivors in attendance.

Biography
Gisela Bina Eckstein (now Zamora) is the daughter of Berthold Eckstein and Bertha (nee Marx) Eckstein. She was born on February 5, 1928 in Battenberg Germany where her family had lived for at least two or three generations. Her younger brother, Norbert, was born in 1930. Her father served and was wounded in World War I, and then worked for the government as an agronomist. However, after the Nazi seizure of power in 1933, Berthold lost his job. Instead he took over his grandfather's shoe store. As Battenberg had a Nazi mayor and was quite antisemitic, when Gisela was ten years old, her family decided to move to Friedberg, a larger and more liberal town. During Kristallnacht, November 9-10 1938, the Nazis arrested Berthold and sent him to Buchenwald. Since he had received the Iron Cross in World War I, he was released after four and a half weeks. The family would have liked to emigrate, but because of Berthold's disabilities they could not get immigration visas. Gisela attended the Jewish Bezirksschule in Bad Nauheim, near Friedberg, and later the Philanthropin School in Frankfurt. In 1941 the Nazis closed down all Jewish schools, and Gisela returned home to Friedberg. In September 1942, her family was rounded up and taken to Darmstadt. From there they were sent to Theresienstadt in Czechoslovakia. Berthold was given a minor position with the Aeltestenrat. Norbert lived with his parents, but Berthold arranged for Gisela to move to children's barrack # L414, under the supervision of Ita Heumann. Ita provided the children with a Zionist education, games, and cultural activities. Gisela also had to work in the camp. One summer she worked in the Waeschereigarten growing vegetables for the SS, and occasionally could smuggle produce to her family. During the winter she worked in the nursery washing diapers in cold water. In June 1944, the Germans sent a group of men, including Berthold Eckstein, on a transport out of Theresienstadt. In September, they told their wives and children that they could rejoin their husbands. No one knew that the final destination was Auschwitz. Gisela's mother, Bertha Eckstein, and her brother, Norbert, who was already weakened from typhus, were killed upon arrival. Berthold also perished there. Gisela was selected for forced labor together with a school friend from Friedberg, Ruth Wertheim (later Bacow). She, Ruth, Hannelore Praeger, and another girl stayed together through liberation, offering each other mutual support. The girls were in Auschwitz for five weeks before being transferred to Marzdorf/Riesengebirge in October 1944. There, they worked manufacturing parachutes from flax. Gisela worked on the flax machine. Her hands became very sore, and she contracted tuberculosis, pleurisy, and mastitis. She was liberated on May 8, 1945 and spent the next five weeks recuperating in a hospital in Hirschberg. After liberation Gisela returned to Friedberg and located Edgar Maurer, a German antifascist friend of her father, who had recently returned from Dachau. Edgar's Jewish wife, Trudi, had perished in Bergen-Belsen. Edgar became her adopted family, and Gisela lived in his house for the next year. With the help of an American soldier, she also placed an advertisement in the America German-Jewish newspaper, Aufbau, seeking relatives. Her mother's brother, Louis Marx saw the notice and contacted her. Gisela immigrated to the United States on March 17, 1947, and her Uncle Louis met her on the pier. Gisela later met another German-Jewish survivor, Joseph Zamora, who had also attended the Philanthropin School in Frankfurt. They wed in a civil ceremony on August 18, 1952.