Portrait of two Jewish brothers who were saved by Father Bruno. 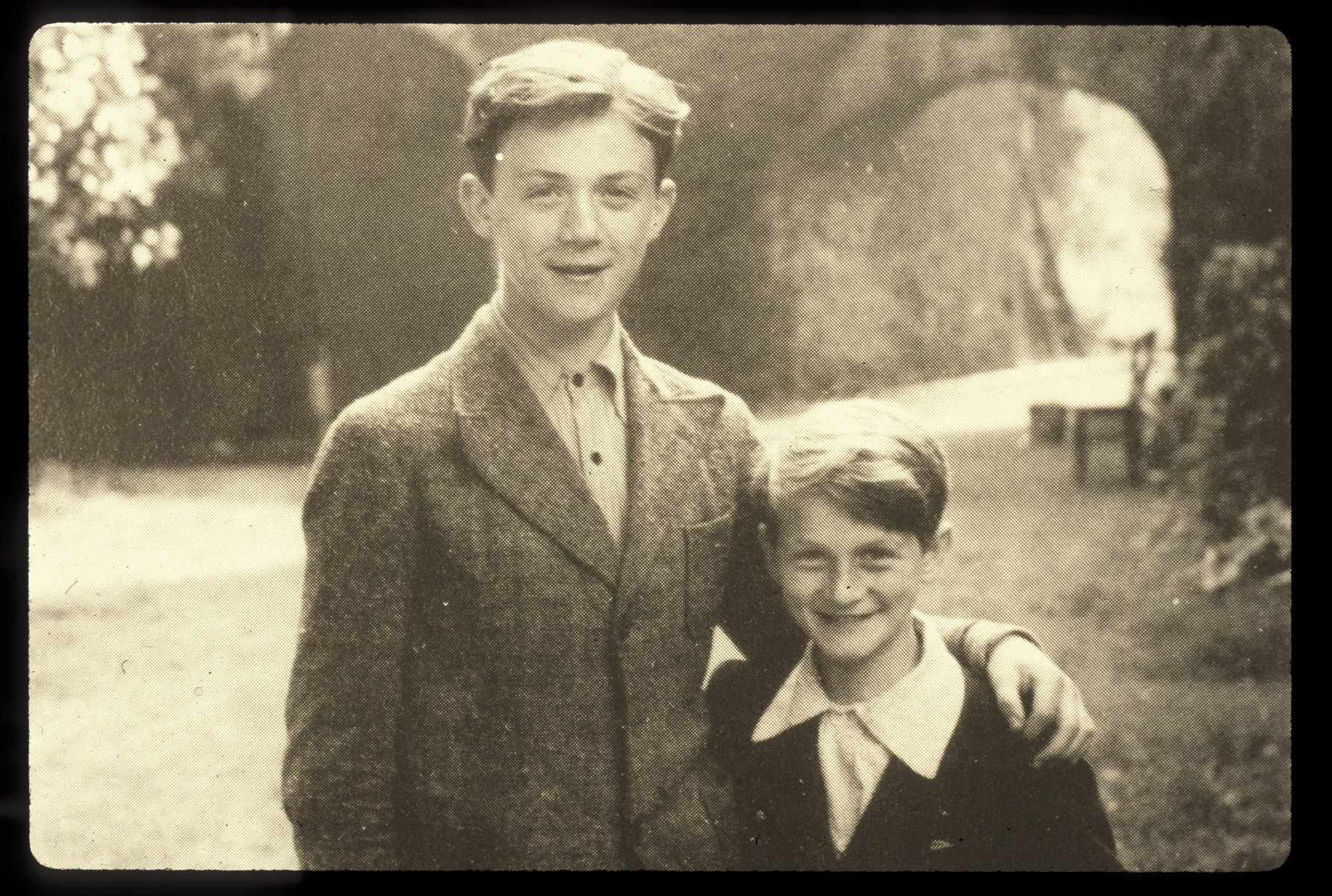 Portrait of two Jewish brothers who were saved by Father Bruno.

Pictured are Bernard and Charles Rotmil. The photograph was taken by Father Bruno the day that the brothers arrived at Le Mont Cesar in June 1943.

Bernard and Charles Rotmil were born to Adolphe and Dora (nee Gottlieb) Rotmil. Adolphe was an art broker born in Warsaw, Poland, and Dora was a homemaker who was born in Hanover, Germany. They raised their three children, Henrietta, born in 1922, Bernard, born in 1926, and Charles, born in 1932, in Strasbourg, Metz, and Paris, France. In 1938 they moved to Vienna, Austria, where they got caught up in the violence of Kristallnacht. Bernard and Charles watched as several Nazi troopers beat and arrested their father. Adolphe was released a month later and the family was able to secure exit visas. They made their way to the refugee center in Marneffe, Belgium, where they stayed until the Germans invaded in May 1940. The Rotmils fled on foot with the other refugees. In the chaos of the bombings and procession of refugees, Adolphe got separated from the rest of the family.

Dora and the three children continued on and boarded a train in Arras, France, which crashed near Rouen. Henrietta died at the scene. Bernard dislocated his hip, and Charles sustained internal injuries resulting in a curvature of the spine. He was not treated at the time because he could walk. The brothers were separated from their mother and taken to the hospital in Rouen; from there they were assumed to be orphans. The hospital staff later evacuated the children to Brittany, where they stayed in a large estate on the island of Berder, then run by nuns.

Charles recounted that after France fell, a Red Cross volunteer, Madame Gutt, the wife of the finance minister of Belgium, escorted the boys back to Belgium. On their way they stopped in Rouen and were informed that their mother had died of her wounds from the train crash. Bernard and Charles were reunited with their father in Brussels. They were able to return to school for a time, but after May 1942 they were forced to move constantly to evade the Gestapo. Charles remembers his father bringing the Jewish stars home and promptly burning them in an ashtray. In 1943 Adolphe was arrested on the street and taken to Malines. Bernard and Charles would later find out he was deported from Malines to Auschwitz on July 31, 1943, aboard Convoy 21.

Once the boys were alone, Bernard sought help at a local church. The priest directed him to a Catholic monastery in Louvain known as the Abbe Mont Cesar. Bernard traveled there alone to meet a Benedictine monk, Father Dom Bruno Reynders, who agreed to shelter the brothers in hiding. Father Bruno has since been honored by Yad Vashem as a Righteous Among the Nations. He gave the brothers the false surname Roumieux but decided that it would be best to hide them separately. Bernard was placed in a camp for young boys. Father Bruno eventually found him work on farms, where he was able to hide for the remainder of the war. Charles was placed in hiding with several families and moved three different times. He was finally sheltered with the Luyckx family, who has also been honored by Yad Vashem. Charles' nom de guerre was changed to Von Romsdonck after moving in with the Luyckx family.

Bernard and Charles were reunited after the war and lived with other Jewish child survivors in a group home funded by the United Jewish Appeal. In a copy of the German language newspaper Aufbau, they found an ad placed by their mother's sister, Regina Gottlieb Vever; she was looking for surviving Rotmils and arranged for the brothers to come to Peekskill, New York. Bernard went first in 1946 and Charles followed later that year.