A group of young Bulgarian Jews rests by bundles of hay in the countryside where they have gone to help with the harvest. 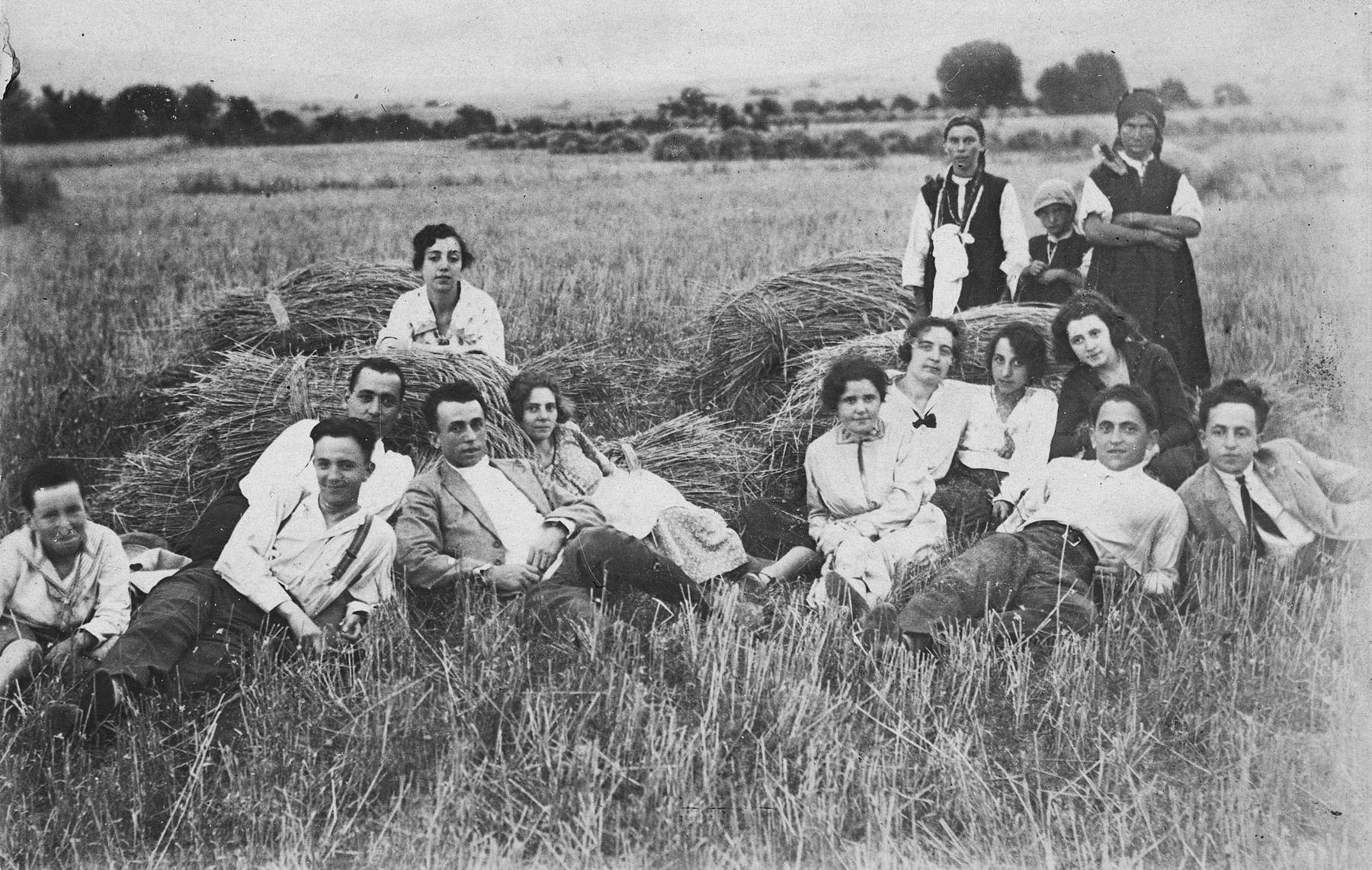 A group of young Bulgarian Jews rests by bundles of hay in the countryside where they have gone to help with the harvest.

In the back are three Bulgarian villagers. Seated on the right are David, Gisela and Julia Tchitchekik.

Biography
Emanuel Zafir (born Emanuel Tchitchekik) is the son of David Tchitchekik (b. 5/28/1898) and Gisela Schreiber Tchitchekik (b. 4/05/05). Emanuel had one older brother, Yitzhak. born on June 14, 1927. Emanuel was born on April 19, 1934 in Plovdiv, Bulgaria where his father owned "Colonialiot," a store that sold imported fruits and vegetables. He was assisted by his younger brother Yosef (Popo). David's family had lived in Plovdiv for generations, but Gisela was born in Romania and immigrated to Bulgaria during World War I. Gisela and David married in January 1925. The Tchitchekik and Shreiber families were further intertwined as Gisela's brother Siego was married to David's sister, Anna. Emanuel's grandparents, aunts and uncles lived next door in three adjacent homes. The adults in the family spoke Ladino to each other, while the children preferred Bulgarian. The Tchitchekiks enjoyed a comfortable life. Gisela and the boys spent the summers in the country; David joined them on weekends. Gisela was an accomplished pianist, and the family enjoyed gathering with friends for evenings of song, accompanied by Gisela's piano. Therefore, though Emanuel's parents were sympathetic to Zionism, they had no desire to leave Bulgaria for the hardships of Palestine. Starting in 1940, Bulgaria's Jews were subjected to various antisemitic restrictions including curfews, wearing small yellow stars, and the confiscation of property. However, they were allowed to remain in their own homes. When Jews were later expelled from Sofia, the Bulgarian capital, a young Jewish couple came to live with the Tchitchekik family in Plovdiv. On the night of March 10, 1943, Plovdiv's Jews were told to prepare for deportation. However, the following day the order was rescinded. (The Tchitchekiks learned only after the war of the extensive lobbying campaign exerted to change to the mind of King Boris.) All the Jews in Plovdiv spontaneously ran to the synagogue to offer prayers of thanksgiving. In 1944, the Soviets began shelling the city, and Emanuel's family built a bomb shelter underground. They were liberated by the Soviet Union on September 9, 1944. A few months later, in December 1944, the Zionist leader David Ben Gurion visited Bulgaria and reawakened the country's Zionist movement. Soon thereafter Emanuel joined the Hehalutz Zionist youth movement, and his brother Yitzhak joined Hashomer Hatzair. Their parents also joined Zionist movements but still had no desire to leave Bulgaria. Yitzhak graduated from Gymnasium but was mostly interested in Zionist activities. In 1947, after being Yitzhak was beaten up by antisemites, his parents agreed to let him immigrate to Palestine. He left Bulgaria in February 1948. The following year, Emanuel declared that he also intended to move to Palestine with or without his parent's permission. Gisela and David did not want to become separated from their children. They sold their belongings and accompanied Emanuel to Israel in February 1949.