Studio portrait of the extended Fleisher family of Kursenai Lithuania. 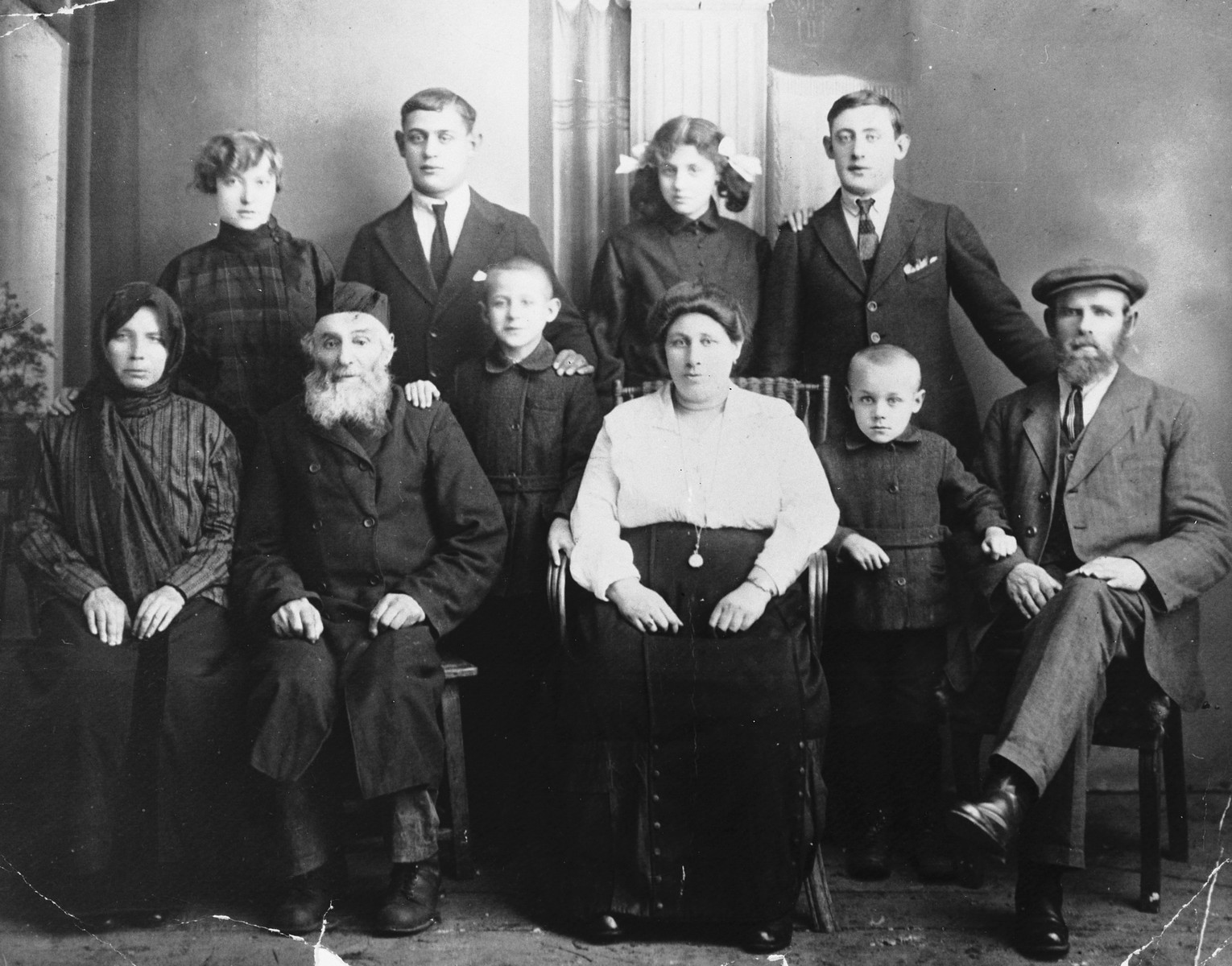 Studio portrait of the extended Fleisher family of Kursenai Lithuania.

Biography
Yehezkel Fleisher is the youngest child of Shlomo David and Tame-Dvora Fleisher. He was born on June 21, 1917 in a small village in Lithuania and grew up in the somewhat larger town of Kursenai where his father sold leather and fur goods. The family also ran a small grocery store from their home. Yehezkel had three brothers, Haim Ber, Zalman Lezer, and Reuven Leib and two sisters, Esther Raize and Batia Michaele. Yehezkel studied in a cheder, a Tarbut school, and graduated from a public school. He then learned sewing and leather making. In 1934 Yehezkel moved to Telsiai to join a Hehalutz hachshara. Two year later, after learning that he could not receive an immigration certificate for Palestine, he left the hachshara and opened his own shoemaking workshop. In June 1941, Germany launched a surprise invasion of Lithuania. When the war broke out, Yehezkel was on route to Linkuvo, near the Latvian border. He was rounded up along with other Jewish refugees, brought to a crowded warehouse without adequate food, water or sanitation and threatened with death. After ten days, he was transferred to the "Red" prison in Siauliai where conditions were even worse. The prisoners were forced to dig the graves of other Jews. After six weeks of imprisonment, Yehezkel was released, ordered to wear a yellow star and sent to the new ghetto in Siauliai. Immediately after his release, he had a photograph taken of himself that he kept with him throughout the war as proof of what he endured. Since Yehezkel was a trained craftsman, he was given work outside the ghetto in a leather workshop. One year later, in 1942, he met Leah, a friend from the Telsiai hachshara, who had smuggled herself into the ghetto after spending a year in hiding. Yehezkel helped her officially register in the ghetto by telling ghetto officials they were married. Following the November 1943 children's aktion, Leah made contact with Christians who had hid her prior to her arrival in the ghetto. A few days later, her acquaintances arrived outside the ghetto at 5:00 a.m. with a horse and wagon, and Leah and Yehezkel escaped the ghetto together with another couple. Yehezkel lay hidden in the wagon until they safely arrived at an isolated village early the following morning. They remained there for six weeks until a friend of the rescuer warned him that the police knew he was hiding Jews. Yehezkel and Leah evaded the police search by hiding in the roof of the barn, but left immediately for a new hiding place. Leah and Yehezkel stayed in their new hiding place for half a year. Yehezkel, who had kept his leather-making tools with him, supported himself by making purses. He gave them to a Jewish woman who was married to a Lithuanian in Telsiai, and she sold the merchandise in Vilna. Eventually, this arrangement also proved to be too dangerous. During their year in hiding, Yehezkel and Leah hid with twelve different families in addition to spending nights hiding on their own in fields or forests. They were eventually liberated by the Soviet Army in the summer of 1944. At first, the Russian soldiers refused to believe that Yehezkel was Jewish until he showed them the photograph taken after his release from prison wearing a yellow star. Yehezkel and Leah wanted to leave Lithuania for Palestine. In December, 1945 they went to Vilna to join a Bricha convoy despite the fact that Leah had given birth to their daughter, Elka, only 17 days before. The convoy's first three trucks safely left Lithuania, but police stopped and fired on the fourth truck, with the Fleishers on board, at a checkpoint. One passenger was killed and two others were injured. The Fleishers escaped into nearby snow-covered mountains, but Elka nearly died in the process. They returned to temporarily to Vilna but eventually made their way to the American zone of Germany by way of Bialystok, Warsaw, and Lodz. They arrived in Berlin by Pesach 1946 and met Yehezkel's sister and brother-in-law, Batia Michaele and Michael Gutstein. The Gutsteins planned to illegally immigrate to Palestine on board the Exodus. However, since Yehezkel and Leah had a baby they were told that they were not eligible to sail with them. After the British forcibly returned the refugees to Europe, Batia who had taken ill had to be carried out of the ship on a stretcher. Yehezkel, Leah and Elka legally immigrated to Israel on January 10, 1949 on board the ship Atzmaut. Both of Yehezkel's parents and three of his siblings, Esther Raize, Zalman Lezer, Reuven Leib were murdered during the Holocaust.