The Safirsztajn family gathers to celebrate the marriage of Mordechai Safirsztajn who had immigrated to the United States. 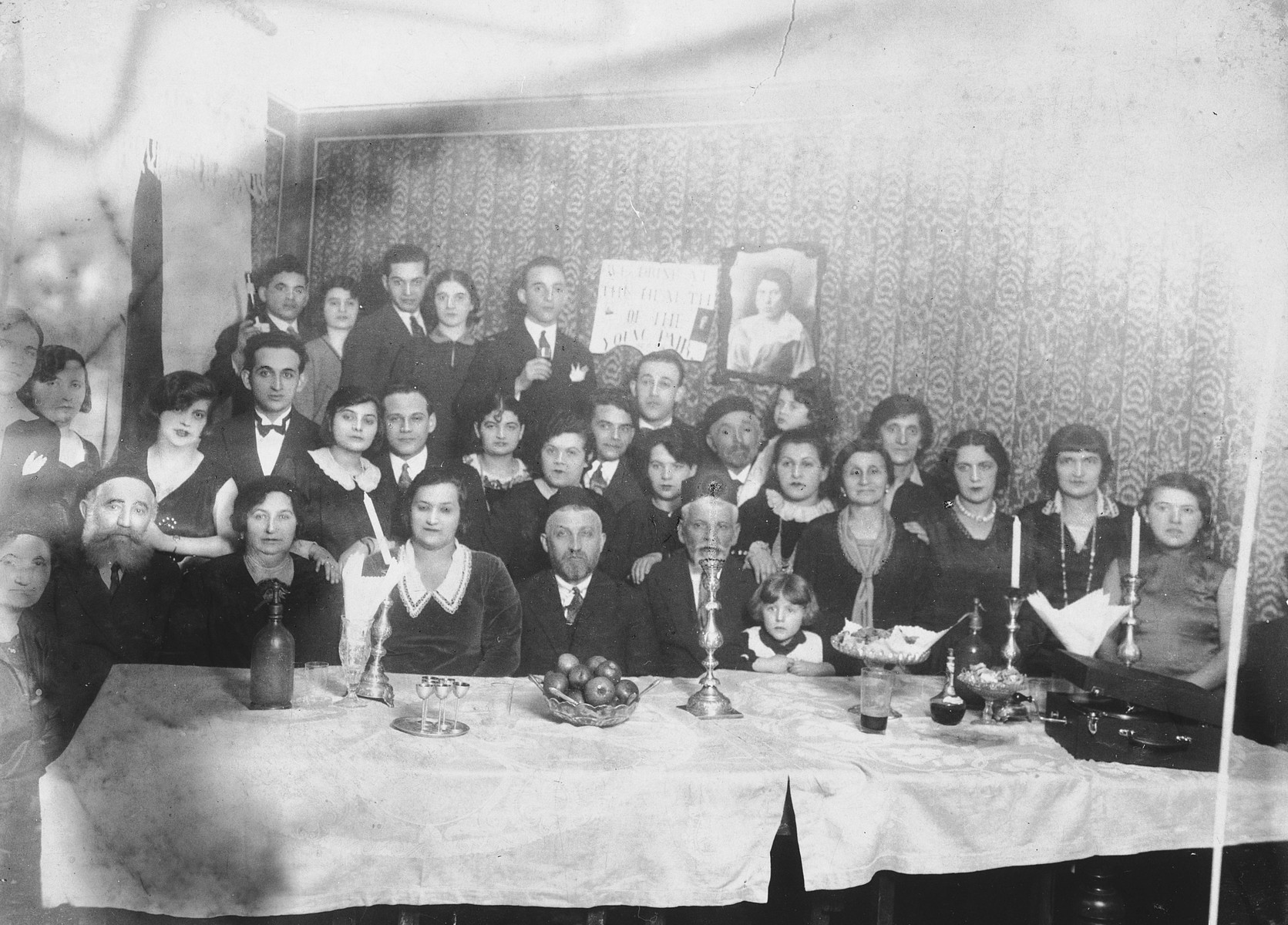 The Safirsztajn family gathers to celebrate the marriage of Mordechai Safirsztajn who had immigrated to the United States.

The sign hanging on wall behind them reads: "We drink to the health of the young couple." Among those pictured is Regina Safirsztajn (far right), one of the four women who was hanged for her participation in the Auschwitz uprising.

Biography
Regina Safirsztajn was the daughter of Josef Safirsztajn and Roza Gold Safirsztajn. She was born in Bedzin where her father ran a restaurant and bar in the front of their home. Regina had six older siblings: Chana Gitla (later Ickowicz), Mordechai (who immigrated to the United States), Isaak, Ezel (who moved to Lodz after his marriage), Tonia and Cesia. She also had one younger brother, David. The children attended Polish schools but spoke Yiddish at home with their parents. Regina's mother Roza died long before the start of the war, and her father Josef died of a heart attack shortly after the creation of the ghetto. He had lived with his children at the time and they gave him a proper burial in the ghetto. While in the ghetto, Regina married Josef Szaintal. However she continued to be known by her maiden name as he died soon thereafter. In August 1943 Regina was deported to Auschwitz along with her sister, sisters-in-law and their children. The family was separated upon arrival, and Regina's sisters lost track of her. Chana Gittla's son Marek, Tonia, and her two small children were killed immediately upon arrival, as was Isaak's wife and child. David's wife, Jadzia, was chosen for labor despite the fact that she had a young child, and she stayed with Chana Gitla and her daughters.

Regina was selected to work in the Weichsel-Union-Metalwerke (Union munitions plant) and became involved in the Auschwitz underground. Together with Ala Gertner, and Esterka Wajcblum, she smuggled out gunpowder hidden in the seams of her clothing. They passed whatever they could steal to Roza Robota, who, in turn, gave it to members of the Sonderkommando. On October 7, 1944 members of the Sonderkommando used the gunpowder to blow up crematorium IV in Birkenau. During the exhaustive investigation that followed the short-lived uprising, Ala, Roza, Ester and Regina were directly implicated in the theft of the explosives. All four were arrested and tortured, and on January 5, 1945, they were publicly hanged in Auschwitz-Birkenau. With the exception of one niece, Roza Ickowicz, and her brother in America, none of Regina's immediate family survived the Holocaust.
Rose Rechnic (born Roza Ickowicz) is the daughter of Abel Ickowicz and Chana Safirsztajn Ickowicz. She was born on January 15, 1926 in Bedzin where her father, Abel Ickowicz, was an accountant. Roza had an older sister, Bronia (b. 9/22/23), and a younger brother, Marek (b. 1931). On September 6, 1939, two days after entering the city, the Germans began persecuting Bedzin Jews. On that day Abel Ickowicz was taken away along with 28 other male Jews. They were shot and then buried in a mass grave in the Polish cemetery. Chana Ickowicz and her three children remained for the next four years in the Bedzin ghetto until they were deported to Auschwitz Birkenau in August 1943. Marek Ickowicz, was murdered upon arrival. Roza, her mother, and sister were selected for labor. Chana Ickowicz died in February 1944 of disease and exhaustion from typhoid. Roza also came down with the disease and was selected to be killed, but for some reason was spared. Some months afterwards, Roza's aunt Regina payed her a surprise visit in her barracks. This is the first contact she had with her aunt since her arrival. One day during the autumn of 1944, Roza failed to show up for roll-call and was sentenced to be lashed. Roza decided to escape and ran from barrack to barrack. After discovering a group of women gathered between the B and C lagers preparing for transport, Roza decided to attach herself to the group so that she could escape from Auschwitz. Unbeknownst to her, the transport was headed to the Bergen-Belsen concentration camp. Roza remained in Bergen-Belsen until the British liberated the camp on April 15, 1945. Roza, who was 18 years old, moved into the Bergen-Belsen DP Camp and waited for her Aunt Regina who she hoped was still alive. Eventually a distant cousin told her that she had been hanged for her role in the Auschwitz uprising. Roza came to the Schwandorf DP camp. On August 15, 1945 she married a fellow survivor from Bedzin and violinist, Simon Lajb Rechnic. They immigrated to the United States in the fall of 1946.