Artist, Esther Lurie, meets with workers on a kibbutz in Palestine. 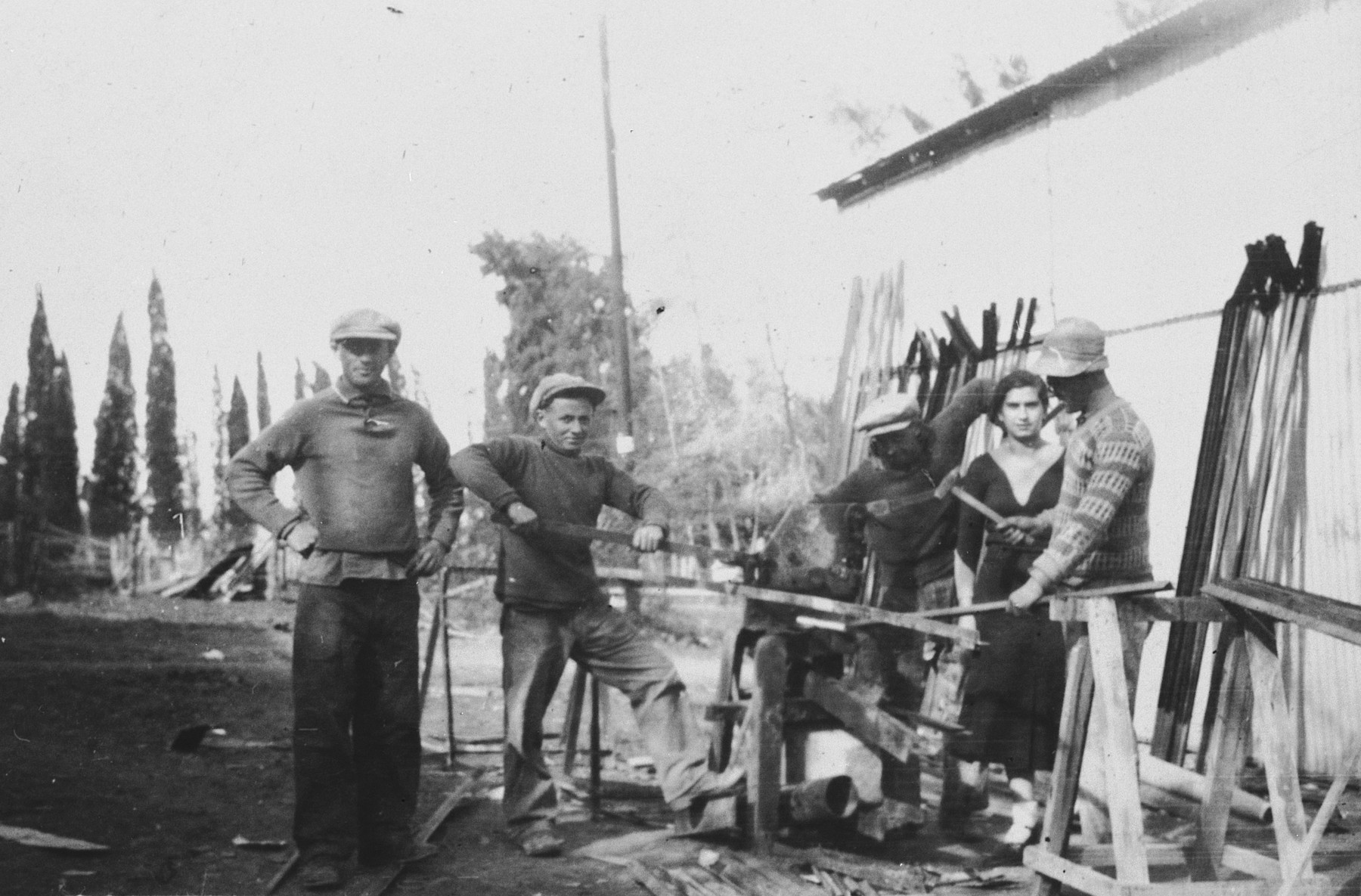 Artist, Esther Lurie, meets with workers on a kibbutz in Palestine.

Biography
Esther Lurie (1913-1998) was a Latvian artist of Jewish origin, who, while living in the Kovno ghetto and imprisoned in the Stutthof concentration camp during World War II, recorded her experience with a series of pen and ink sketches and paintings. Lurie was the fifth child born to a religious Jewish family in Liepaja, Latvia. During World War I, the city was taken over as a military port, and her family was forced to move to Riga. She demonstrated artistic talent at a very early age. When she was fifteen, she began to study art seriously. In 1931, she entered the Instituts des Arts Decoratifs in Brussels to study theatrical set design. In early 1934, she went to Antwerp to study drawing at the Académie Royale des Beaux-Arts. At the end of the year, she moved to Palestine. There, she immersed herself in artistic life. To broaden her range of subject material, she visited kibbutzim, where she drew landscapes, portraits, dancers and musicians. In 1937, Lurie held her first exhibition at Kibbutz Geva. The following year, the Painters and Sculptors Association of Palestine accepted her as a member, and she also held exhibitions in Tel Aviv, Jerusalem and Haifa. At a general exhibition at the Tel Aviv Museum, her 1938 work, "The Palestine Orchestra" won the country's most prestigious award in drawing, the Dizengoff Prize. In 1939, Lurie returned to Antwerp to study with the renowned drawing instructor Isidoor Opsomer. For the next year, she studied intensively and traveled throughout Europe, exhibiting her drawings. In 1940, she held a critically acclaimed exhibition at the Royal Opera House in Kovno. However, when the Nazi occupation of Lithuania began in 1941, the Gestapo deemed Lurie's work as "Jewish art" and confiscated it. Later that same year, Lurie was forced to move to the Kovno ghetto. She regarded her new surroundings as an opportunity to study new landscapes as well as to record the Nazi persecution of the Jews. She accompanied her drawings with extensive written testimony. Members of the Altestenrat (Jewish council) saw her work and recognized its importance as a historical document. They requested that she record everything she witnessed in the ghetto and helped her procure materials. When the Nazis discovered some of her sketches, they ordered her to do commissions for them. As the situation in the ghetto became more desperate, she asked Jewish potters to make her several large, clay jars. She photographed about two hundred drawings and watercolors and stored them in the jars. She then deposited them in the ghetto's secret archive. During the liquidation of the ghetto, Lurie was separated from other family members. They were deported to Auschwitz, where they perished, while she was sent to Stutthof. In the concentration camp, she continued to sketch, and bartered her drawings for food. In August 1944, she was sent with 1,200 other female inmates to a forced labor camp for women at Leibitz where she continued to record everything she saw. On January 21, 1945, she was liberated in the camp by the Red Army. The Soviets concentrated the liberated prisoners, both civilian and military, in several locations. Since she had Palestinian citizenship, Lurie was attached to a group of liberated British POWs. She worked briefly as an interpreter and several months later was repatriated to Palestine. Before returning to Palestine she lived in a camp in Italy where she met Jewish soldiers who were serving in the British army. One of them was the artist Menahem Shemi, who organized an exhibition of her drawings. The show resulted in the book "Jewesses in Slavery" (sketches of women in Leibitz). In the fall of 1945, Lurie reached Palestine and began the process of trying to recover her wartime drawings. Only a fraction were ultimately found. Lurie became an international sensation when her stories were published in the press. In 1946, she again won the Dizengoff Prize for "Girl with a Yellow Badge," a recreation of a drawing made in the Kovno ghetto. Some of her drawings were submitted as evidence during the trial of Adolf Eichmann in Jerusalem. Lurie lived in Tel Aviv until her death in 1998. Her works are part of the permanent collections at the Ghetto Fighters' House, Yad Vashem and a number of private galleries.